Pandemic Pick: Which Vermont Business Pivoted the Most to Serve a Greater Good?

The last thing Beth Hammond wanted to do was close the doors of the Heineberg Community Senior Center.

As COVID-19 spread, she knew seniors would be isolated at home, some without access to meals and some with depression, said Hammond, executive director of the Burlington nonprofit.

"The very real fallout of our response to trying to keep everyone healthy and COVID-free was of concern for me," she said. "We wanted to keep the social contact the safest and best way we could."

The problem was that many of the volunteers Heineberg relied on were seniors themselves, who had higher risk of complications from the virus. So, Hammond reached out to the community, partnering with organizations such as HANDS (Helping and Nurturing Diverse Seniors), a meal delivery group led by Megan Humphrey. Together, they used their network of friends and family to develop a volunteer base that could deliver meals, make check-in phone calls and provide other help to about 600 homebound seniors as Vermonters lived under quarantine rules.

It was a big ask, and the group needed to mobilize quickly. But, Hammond said, "we had more volunteers than we needed at one point."

Heineberg's nimble adaptation included working with the University of Vermont Medical Center to provide a telehealth site and volunteers who could help patients log on. The center offered virtual cooking, art and physical movement classes through Zoom. And this year it shifted its AARP tax assistance program from in-person to contact-free.

All of this earned kudos from locals. "The center was instrumental in keeping our older adult population healthy and secure through the pandemic," wrote one Seven Days reader.

It wasn't all business, either. Heineberg created a drive-in birthday party for seniors older than 90 in the Burlington Elks Lodge parking lot — complete with a DJ, dinner served in cars and a speech from Mayor Miro Weinberger.

Wrote another fan: "Without their help, many seniors would have had little or no contact to help them get through the pandemic."

When it's time to reminisce about the COVID-19 pandemic, the Burr family will remember spending Friday nights assembling meals for delivery to local food banks and churches.

Married couple Lisa and Jonathan Burr co-own the Woods Lodge catering and events facility in Northfield. As the pandemic closed lodging and restaurants, they switched to selling takeout meals for their regular customers, Lisa said. But after a few weeks, their children, young adults in their twenties who had both recently returned to live at home, said they'd like to provide meals to Vermonters who couldn't afford to buy them.

So, the family found one-pound takeout containers with lids and labels and packed free meals for the Northfield food shelf. "That became the family thing we were doing together on Fridays," Lisa said. "It was an assembly-line kind of thing."

The meals were a hit the very first week.

"They said, 'Wow, can you do 60 next week?'" said Lisa, referring to the food shelf. The family ended up preparing 150 meals each week and distributing them through various programs, thanks to a major benefactor in town and federal COVID-19 emergency funding. Patrons picked up meals at five different houses of worship and a community center in Montpelier, as well as at the food shelf.

The family is still preparing those takeout meals, now for Vermont Everyone Eats!, a state meal program created in response to the pandemic.

"They did not do any of this for publicity, but rather to keep their business alive and help their community at the same time," said one customer.

"They have continually [aided] people in the community whenever there is a crisis where they can provide food or lodging," said another, mentioning 2011's Tropical Storm Irene, the 2015 Amtrak derailment in Northfield and the pandemic. The family helped others "at times when they incurred great challenges themselves." 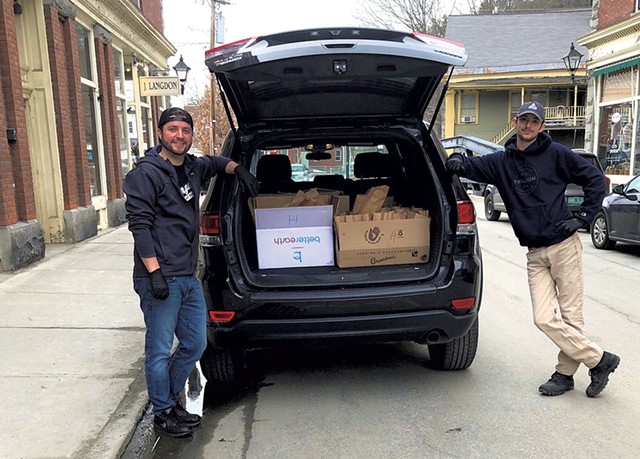 When Vermont companies closed their doors, sending employees home, leaders at Union Mutual in Montpelier wondered how neighboring restaurants would fare. The insurance company alone had 80 employees who would no longer be traveling into town for work.

Union Mutual immediately started ordering sandwiches and meals to be delivered to essential workers and anyone else who might need a lunch. Nancy Martel, who co-owned the Montpelier deli Pinky's on State, said the company's action created "a positive frenzy of open-ended generosity."

Then led by Michael Nobles, Union Mutual ended up ordering hundreds of sandwiches as businesses endured a widespread shutdown to prevent the spread of the virus. Nobles — who passed away in June 2020 — had staff place orders for sandwiches, chips and cookies and deliver them to the charity of Pinky's choice from March through May of last year.

"This was his and Union Mutual's way of helping our business stay alive while he indirectly helped others, as well," said Martel. (Pinky's stayed open until December, when the business was sold.)

"It all started with Michael Nobles, and we thank him," she said. "He never asked for any recognition whatsoever, either for himself or the company."

Seven Days readers praised Union Mutual for its volunteer action during the pandemic. The company distributed its meal requests and donations among many restaurants in the state capital.

"It was just amazing how it took off," she said. She estimated that Union Mutual spent more than $10,000 on local meals.

"It was like, 'These are our friends,'" she said of local restaurateurs. "We realized we could help two neighbors with one dollar."

Vermont Everyone Eats! has served more than 1,024,000 meals to residents impacted by COVID-19. The program helped save an estimated 500 restaurant jobs and provided consistent business to some 200 eateries when that industry was dealt a severe pandemic blow. The meals — from chicken-and-leek pie with salad to chicken sausage with couscous and green beans — even include local ingredients.

Yet before the state legislature established the program in August 2020 with $5 million in CARES Act relief funds, a grassroots movement sprang up across the state to feed people in need.

These early efforts — swift business pivots that involved a collaboration of restaurants and nonprofits — included ShiftMeals in Burlington, organized by the Skinny Pancake; a partnership in Vergennes among the city's Boys & Girls Club, Bar Antidote and Three Squares Café; and a southern Vermont initiative, Nourishing Artists, conceived and organized by the Downtown Brattleboro Alliance. Together, the programs provided a model for government action when the need was clear: Food insecurity rose 33 percent during the pandemic.

"[Then-lieutenant governor] Dave Zuckerman and I got on the phone, but it was more like farmer boy and restaurant dude," recalled Matt Birong, a Democratic state rep from Vergennes who also owns Three Squares Café. (Zuckerman co-owns Hinesburg's Full Moon Farm.)

"We were like, 'How can we work this [money] into restaurants, feeding people who are experiencing food insecurity while still propping up our local food systems?'" Birong said.

Everyone Eats was the answer. And, according to Seven Days readers, the program and its related initiatives — including a Localvore Passport app that facilitates access — are working. "They gave those of us who had difficulty making ends meet a way to keep fed. They are all ROCK STARS!" one wrote.

Another reader applauded the effort as a "trifecta of goodness," singling out three factors: "monies to restaurants, food to folks, and ... an excitement and energy [that] was created for all involved."

How a Two-Year Push to Rename Vermont's Negro Brook Failed