Pandemic Pick: What Outdoor Store Helped You Gear Up for Adventures? 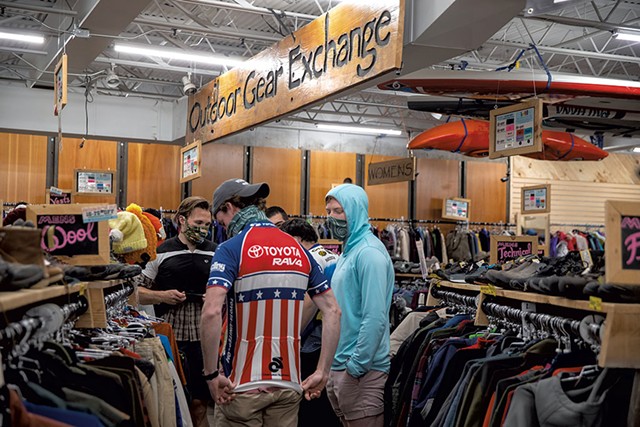 When the going got tough during the pandemic, Vermonters went outside to play, and in even greater numbers than usual. For many Seven Days readers, that meant stocking up on equipment at Outdoor Gear Exchange.

The Burlington business is "always ready to supply an adventure," said one reader. Another noted that the store "provided great gear to all during one of the biggest surges in outdoor activities."

Indeed, co-owner Marc Sherman saw interest soar in activities that could be done while socially distancing — notably, cycling, paddling, skiing and camping. But high global demand, supply chain shortages and shipping bottlenecks of that gear left OGE's team scrambling to restock its inventory, especially hard-to-get items made of aluminum, including tent poles, bicycles and bike parts. New kayaks sold out this year even before the paddling season began, and OGE doesn't expect to have more until September.

Though 2020 was a challenging year, Sherman said that sales weren't down as much as he initially feared. Some losses, incurred while the store was closed last spring, were balanced by increased online sales and greater foot traffic later that year, he said.

Also, declines in sales of "soft goods," such as footwear, clothing and accessories, which typically result from in-store browsing, were largely offset by increased purchases of "intentional goods," such as camping and climbing gear. Sherman predicted that customers who took up new sports during the pandemic, or upgraded older gear for activities they were already into, will stick with those pastimes for years to come.

Most importantly, Sherman believes customers appreciated the measures OGE adopted to keep everyone safe, from screening shoppers at the door to offering curbside pickup.

"For the most part, our customers have been receptive to our efforts and see that we're doing the right thing," he said.

North Star Sports: 2020 was a hectic year for bike sellers, due to massive demand but limited supplies. Yet North Star Sports kept the gears turning through sales, rentals and repairs of conventional and electric bikes. With e-bikes taking off, North Star is now capitalizing on its decades of experience in that market. (Burlington • northstarsportsvt.com)

Skirack: Since 1969, Skirack has been outfitting Vermonters for solo sports of all kinds, including cycling, running, snowshoeing, skiing, snowboarding and inline skating. Though the pandemic initially limited in-store access, Skirack's curbside pickups and free shipping for items of $75 or more helped keep customers on the go. (Burlington • skirack.com)