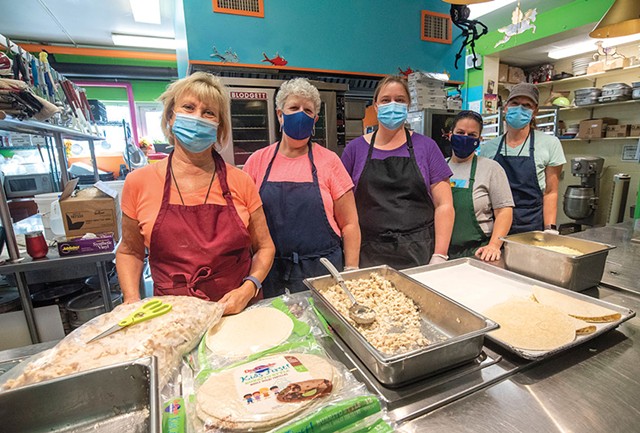 When Vermont schools abruptly shut their doors in March last year, Val Hussey scrambled to keep the kids in her community fed.

The Hardwick native has been feeding neighbors for 35 years. Hussey, 62, and her ex-husband ran a quick-stop market and deli famous for its seafood chowder. She's since spent more than two decades cooking in local schools.

While some think school cafeteria workers should be called food service professionals or chefs, Hussey goes no-frills. "You go to the beach or store and kids are like, 'There's the lunch lady. Thank you, lunch lady!'" she said. "I always want to be the lunch lady."

Pre-pandemic, Hussey managed the teams that cooked breakfast and lunch for more than 200 elementary students in Hardwick and Woodbury. They bought from local farms, baked muffins and made shepherd's pie from scratch.

But on March 17, 2020, Hussey's job took a hairpin turn. "The schools closed at the end of the day, and they told us, 'We're going to deliver meals to homes,'" she recalled. "Nobody could tell us how to do it because it hadn't been done before."

School buses would handle delivery, but Hussey had to figure out — overnight — how to source, prepare and package about 2,000 meals a week.

Hardwick has received a lot of publicity for being "the town that food saved," part of the title of a 2010 book about the area's agricultural renaissance. But within 10 miles of a cheesemaker who produces artisan wedges priced at $32 a pound, more than half of the town's grade-schoolers qualify for free or reduced-price meals.

And that was before the pandemic.

Hussey knew that, with lockdown, layoffs and juggling work with full-time childcare, family budgets and nerves would be stretched to breaking. She was worried for the kids, especially younger ones. "They can't go to the cupboard and get food and prepare themselves meals — and a lot of these homes don't have food in the cupboards," she said. "We're here to look out for these kids."

Hussey coped with shortages of staffing, as well as takeout packaging and single-serve foods, which school districts nationwide needed urgently all at once.

"You got what you got, and you had to make it work," she said. After Hussey realized it made sense to deliver milk in bulk rather than in small cartons, she created a color-coded chart detailing which size household got quarts and which gallons.

When kitchen staffers were quarantined, paraeducators did dishes. A teacher helped deliver meals. "God bless her," Hussey said. "We used a lot of bleach and a lot of gloves, and people showed up."

Over the last year, Hussey has added Greensboro's elementary school food program to her management responsibilities at Hardwick and Woodbury and was promoted to food service director for the Orleans Southwest Supervisory Union.

"Her great team says a lot about Val — the efficiency, the love and caring," Hardwick Elementary principal Patrick Pennock said. Even with students back in person, COVID-19 exposures have required several eleventh-hour switches back to delivery. "She turns on a dime to get meals out to kids."

"When I'd go home at night, I was always thinking of a more efficient way, of new items to serve," Hussey recalled. "If so-and-so isn't on my list, [I'd think], I wonder if they need food?"

Thanks to emergency expansion of the federal school meals program, all kids currently qualify for free meals, but families must sign up.

Josh Peets lives in Hardwick with his partner and two daughters. He kept working but with reduced hours initially. If not for the school meals, "I wouldn't have been able to pay rent," Peets said. His girls, he added, would stand watch for the deliveries: "They liked the routine."

Early in the pandemic, "some days were so chaotic that I would forget to sign up," Peets explained. "Val would personally make sure [meals] got to the house. She didn't have to do that. What a relief to come home to them."

The original print version of this article was headlined "Lunch lady"