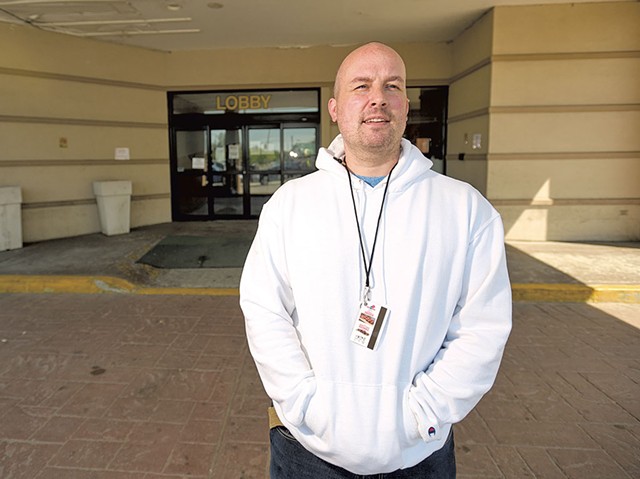 Todd Brown was working at the Turning Point Center of Chittenden County in Burlington last spring when he learned that the state was planning to move its homeless population into hotels during the pandemic. The program needed staff for this massive undertaking, and his boss had suggested him. He was told to call a field director at the Agency of Human Services if interested.

Brown, 39, was hesitant. COVID-19 was surging, and he feared bringing the virus home to his 16-year-old daughter. But his curiosity prevailed. Brown reached out for more information, and the conversation, he recalled, went something like this:

"I'd like to have some idea of what I'm walking into."

A year later, Brown's up-for-whatever attitude remains fully intact. As a temporary employee of the Champlain Valley Office of Economic Opportunity, he's been working at the Holiday Inn Burlington since May 2020. The Williston Road hotel is among dozens still primarily serving unhoused people 15 months into the pandemic. More than 5,000 have been placed under the emergency program since March 2020, including 250 at the Holiday Inn.

Brown sat for an interview with Seven Days last month inside one of the hotel's conference rooms, which has been turned into a makeshift donation center offering residents everything from coats to kitchenware. As Brown summarized his job duties, it became clear that his title, housing advocate, didn't begin to capture the breadth of the work.

He and his colleagues have an office in the hotel lobby, but Brown spends most days walking around and holding case management meetings — both scheduled and impromptu. He's helped people buy cellphones, find jobs and file taxes. He's distributed food and arranged rides to appointments. He even helped a former resident swap out a rusty car battery; the vehicle had been sitting in the hotel parking lot for months.

One day in particular stands out for Brown: He helped an older couple move into an apartment in Essex. The woman was so happy to have her own space that she spent five minutes telling Brown what she planned to cook that night.

"Just to see how excited they were about all this stuff that I don't think about when I go home, that was really special," he said.

Of course, not all endings are happy. There have been overdoses, deaths, people who left and never returned.

Brown's background helps him navigate it all and easily connect with clients. After his drug and alcohol issues led to a couple of stints in rehab, Brown returned to school and earned a psychology degree, then became a certified recovery coach. He understands how a confluence of circumstances can derail even the most stable life.

"He's just got a very grounding way about him," said Dave Gundersen, director of CVOEO's emergency housing program. "He approaches the folks we serve here, regardless of their background or history, with just such consistent respect and compassion.

"Even when people have been rude to him or there's been damage to a relationship," Gundersen continued, "I've seen him just come back to give people another shot so many times."

Brown's gig will soon come to an end: The state is winding down the hotel program, citing its unsustainable cost, and the Holiday Inn plans to close for renovations later this month. Much of Brown's time is now spent working with the 80 or so people still living there to determine what comes next.

He faces a similar question in his own life. Brown said he'd love to continue working for CVOEO but isn't sure whether the organization will be able to keep him on after the hotel program closes.

Either way, he said, the experience has been worthwhile. "Working here has solidified that I'm doing the right type of work," Brown said. "This is where I feel most at home."

The original print version of this article was headlined "'Home' Maker"