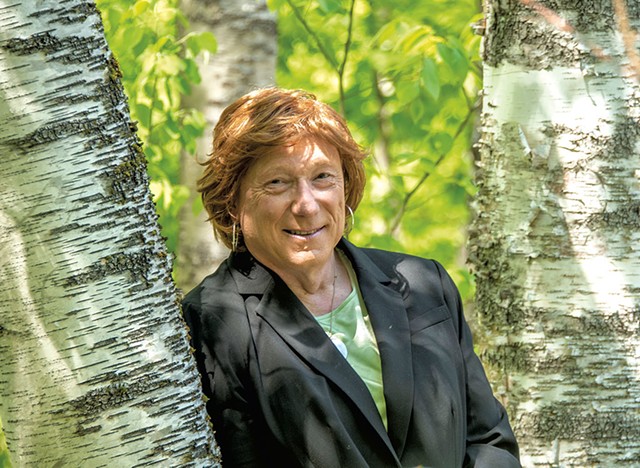 In 2010, Paula Otenti was living in Lake Placid, N.Y., where she never felt totally comfortable being out as queer. "I could never be who I am over there, that's for sure," she said. One day, in a Lake Placid-area circular, she saw an ad for RU12?, now called the Pride Center of Vermont. She thought, I should probably check this place out.

But Otenti, who was a firefighter in Massachusetts for 26 years and later served as the emergency management coordinator in Middlesex, doesn't merely check things out. By 2018, Otenti was overseeing all of the Pride Center's volunteers — also a volunteer role — and helping to plan the annual Pride Festival & Parade.

"She created a timeline for us so that next year we could look at it and know when we needed to do even the most mundane things, like, 'This is when we have to call Casella,'" Marsh said, referring to the waste management company. "And I've used it ever since."

In 2019, Otenti became the coordinator of Momentum, a Pride Center program for LGBTQ adults age 40 and up. In pre-pandemic times, a dozen or so regulars would meet for coffee on Tuesday mornings at the Pride Center; on the occasional Sunday, they'd gather for brunch.

But Otenti soon realized that these meetups tended to draw the same people, most from Chittenden County.

"Everything we were doing was so Burlington-centric," she said. "I decided that we needed to take it further."

By the end of 2019, Otenti had teamed up with Rainbow Umbrella of Central Vermont to organize queer socials in Middlesex, Montpelier and St. Johnsbury.

Then the pandemic struck. Otenti, who lives in the broadband barrens of Middlesex, went to considerable lengths to cope with the sudden pivot to Zoom.

"We'd have these committee meetings, and Paula would be sitting in her car somewhere, trying to connect to a Wi-Fi hot spot," said Mike Bensel, executive director of the Pride Center. "That's how dedicated she is."

In the frantic early days of the pandemic, Otenti said, those Zoom sessions offered more than just human interaction; they allowed people to process their fears and parse fact from fiction amid the deluge of public health misinformation. She wanted Momentum to reach an even wider audience, but she recognized her limits.

In July 2020, she persuaded Bensel to let her take on an intern, L Covey, a Champlain College senior. Thanks to Covey's social media savvy, more people began to attend the Zoom events. By early fall, Momentum had added a weekly virtual dinner.

Covey, who uses they/them pronouns, had some trepidation about working with an older population. "I was nervous that they might dismiss me, because I haven't had the experiences they've had," Covey said. But Otenti made them feel valued and respected, and Momentum-goers embraced Covey, too.

Eventually, Otenti asked Covey to facilitate a meetup. Covey was anxious about flying solo, but Otenti was encouraging.

"If you were playing in a basketball game, Paula would be that fan in the stands with, like, a huge gaudy sign with your name and photo on it," Covey said. "She's just there to show you that you rock 100 percent of the time."

At the end of May, Otenti left her role at Momentum to join the board of the Central Vermont Council on Aging, where she advocates for LGBTQ seniors. But the Pride Center program remains in good hands: This summer, Covey will become the interim coordinator.

"Momentum is Paula's legacy, and I'd love to see her stay involved as much as she wants to," Covey said. "I know I'm going to be texting her for advice, because she's taught me so much."

Otenti has learned a lot from Covey, too. "L texted me one night and said, 'I shared the Google doc with you,'" she said. "And I was like, 'What the hell is a Google doc?'"

The original print version of this article was headlined "Zooming Along"