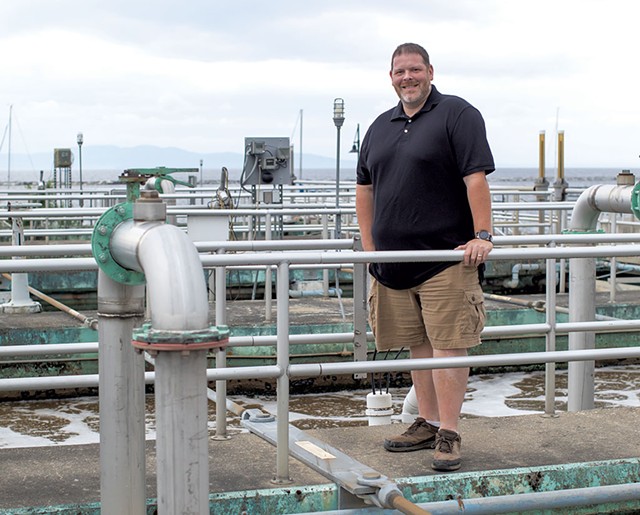 Matt Dow has spent most of his adult life talking about what happens after you flush the toilet.

The second-generation wastewater operator manages the City of Burlington's three treatment plants. His late father was the superintendent of the South Burlington wastewater plant, and his mother's cousin runs the Essex facility. Needless to say, it wasn't uncommon for sewage to be a topic of dinnertime conversation.

These days Dow, 40, is more likely to be found behind a desk than out in the field, but the coronavirus pandemic offered him a hands-on assignment.

Last summer, Dow and the city's COVID-19 Analytics Team began testing wastewater for viral markers of the coronavirus to track and prevent outbreaks. Dow, a 16-year department veteran, chose the testing locations, collected specimens from manholes and packaged up hundreds of samples to be processed in labs off-site.

Dow deflects praise, but city officials who worked with him are eager to dish it out.

"There's nothing in this project that would have worked without his intervention and his commitment," said Brian Lowe, the city's chief innovation officer, who leads the analytics team. "Matt made it easy."

Dow started by taking samples at the city's treatment plants but soon expanded his collection points to places where the virus was spiking. He deployed a fleet of portable samplers, each resembling an armless R2-D2, to manholes around the city. Suspended from a metal bracket, the machines dangled a 25-foot hose into the passing wastewater, siphoning up poop particles at various intervals.

The logistics were challenging. When it snowed, Dow had to remove the samplers when there was little traffic, lest a car slide into him or his crew. When a manhole was in the dead center of a busy intersection, Dow asked the street department to help keep traffic flowing.

Dow's department was also short-staffed. Two longtime operators retired before the sampling program even started, taking with them a combined 60 years' worth of field experience. Dow eventually hired replacements, but he found it easier to collect and process the samples himself.

He frequently schlepped the cargo to the FedEx Ship Center in Williston before turning north to go home. Dow lives in Georgia with his wife, Noranne, and their two young children.

"He was immediately all in," said Carolyn Felix, a former analyst for the City of Burlington who worked with Dow. "Despite having an already really heavy workload and all the challenges that come with balancing work and family during a pandemic, Matt just was one of those persons [to show up] when he's needed."

And the program worked. In November, the city ramped up free testing in the New North End after wastewater samples in that area detected high levels of the coronavirus. In February, Mayor Miro Weinberger announced that samples from the main treatment plant downtown revealed low levels of the B.1.1.7 variant, the first evidence of the highly contagious strain in Vermont.

For Dow, the program's greatest success was when the city was able to alert eldercare homes about high viral loads in their area. In one case, a facility's decision to conduct additional tests found an asymptomatic case that otherwise might have spread. When Dow realized that the simple warning could have saved a life, he was moved to tears.

"If this helps one person either not get super sick or die, if there's any true benefit that comes from this, it makes it worth it," he said.

The city's testing program has slowed in recent weeks as COVID-19 case counts continue to drop. Dow has stopped doing fieldwork and is back at his desk, and he wishes his dad could see how far he's come.

"That was one of the bittersweet things," Dow said. "He just would have been so proud of me."