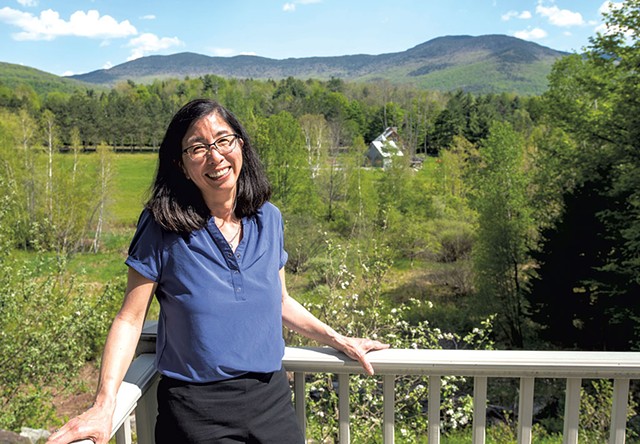 During one of many food drives organized last year, Rep. Heidi Scheuermann (R-Stowe) marveled at how the community had come together to support one another during the pandemic.

The Stowe C19 Team General Relief Fund had raised thousands of dollars for people in need. It provided meals for those whose jobs evaporated when the tourism industry tanked. And it forged innovative partnerships with local businesses, such as one distributing $20 gift certificates for purchases at a local dairy.

There's plenty of credit to go around for the success of the overall effort, but Scheuermann said one person stands out for having gone above and beyond.

"We would never have been able to do what we did without Leigh," Scheuermann said. "Not in a million years."

Leigh Pelletier stepped up to help lead the fundraising drive but ended up doing much more, according to Scheuermann. She became the brains and the brawn of the operation.

"I remember she had a dolly with these three big boxes of food she was hauling out to load into my truck," Scheuermann said. "That was Leigh. She was there on the ground getting done whatever needed to be done."

A former Massachusetts prosecutor, Pelletier moved to Stowe with her husband, John, and three sons about 12 years ago, primarily to give the family a healthier quality of life.

Soon after the shutdown last year, organizers of the response team realized they needed to raise significant funds to meet the community's needs. Pelletier didn't have formal fundraising experience, but she was involved in local schools and isn't shy.

"I don't have a problem asking people to chip in, so that's where I came in," Pelletier said.

She worked with the nonprofit Friends of Stowe Vibrancy to manage donations to the fund and set up a GoFundMe page. Together they helped raise more than $110,000.

Pelletier also collaborated with local restaurants, including the Skinny Pancake and Edelweiss Mountain Deli, and other groups to assemble and deliver meals and food boxes to families in need.

And she helped orchestrate a fundraising effort by artisans whose work was sold in several local stores; the proceeds went to the emergency fund.

And yet Pelletier steers the kudos for these and other initiatives toward others, including Elise McKenna, president of Friends of Stowe Vibrancy; Jeff Clarke, co-owner of Edelweiss; and Katie Ziegler, who made 500 Hope Hats and donated them to sell in local shops.

"If I'm to get credit for anything, it was just recognizing early on that people really wanted to have a venue to be able to help," Pelletier said.

She has spent much of her time linking donors with existing charity channels. One donor, for example, wanted to make sure that, in addition to holiday food boxes, families with children had gifts for the holidays.

The $20 gift certificates to Mansfield Dairy were another way to bring together two needy groups — hungry families and a local dairy facing a 70 percent drop in revenue as restaurant business disappeared.

The pandemic may be waning now, but Pelletier vividly recalls the desperation people felt when they remained in its grip. In the fall, she said, one young family had to quarantine for six weeks after one child, and then another, and then a parent tested positive for COVID-19. "It just snowballed. It was just horrible," she said. "They were stuck. It was just so overwhelming for them."

When Pelletier delivered food boxes to the shut-in family, the parents told her they appreciated getting help locally without having to navigate the state benefit system.

While she found it gratifying to help, Pelletier insisted that accolades should go to those who set up the emergency fund and donated to it, and to legions of fellow volunteers. That kind of humility doesn't surprise Scheuermann one bit.

"That's just who she is. She doesn't want credit," Scheuermann said. "She just wants to make sure she's doing good, and she's done an incredible amount of good during these last 14 months."

The original print version of this article was headlined "Humble Heroine"