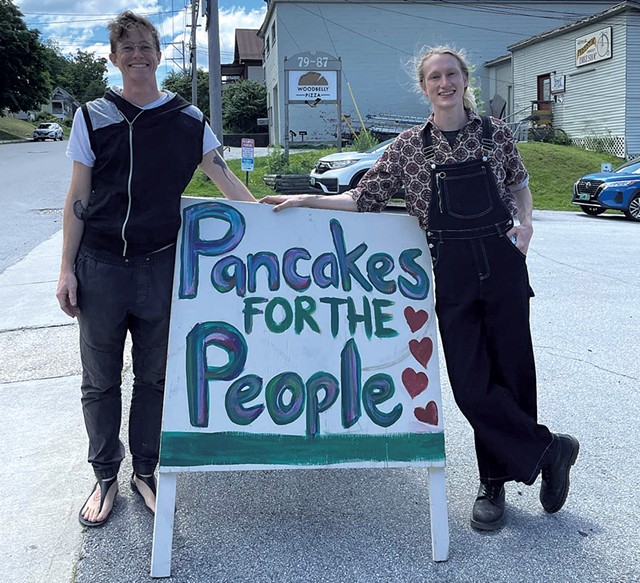 The inaugural Pancakes for the People might not have been whipped up in 2019 if founder/organizer Poa Mutino hadn't climbed a Montpelier lamppost. Mutino had permission to operate the free Sunday morning breakfast pop-up outside city hall, but the griddle required electricity, and the building was closed for the weekend.

"So I scaled the pole with the power cord in my hand," Mutino, 32, said. "I made sure it wasn't going to trip the circuit, then I plugged it in and had power."

Since that electrifying start, Pancakes for the People has offered free breakfasts to the community in Montpelier and Barre. The gatherings have morphed from weekly, socially distanced outdoor meals during winter 2021 to catering for social justice events and, now, monthly indoor pop-ups with a diner-style menu at Montpelier's Woodbelly Pizza.

On the third Sunday of every month, from 8 to 11 a.m., Pancakes for the People takes over Woodbelly and turns up to two gallons of batter into piping hot breakfasts. The group hopes to add a second indoor location in Barre this winter.

"It's a really nice next step because a portion of who we serve is the houseless community," Mutino said. "Rather than serve a meal on the street, we're giving the dignity of coming indoors, where there's a clean bathroom and people can sit."

The program's signature batter mixes cornmeal, buckwheat flour and brown rice flour for a naturally gluten-free pancake, based on Mutino's maternal grandmother's recipe. They're available plain or with toppings such as local apples and Cabot cheddar. For customers who can afford to donate, suggested prices are listed for each item (up to $6 for a short stack with toppings). Twice a year, Pancakes for the People donates half of its proceeds to BIPOC-led land or education projects.

"Food is a way of caring for people that I really enjoy," Mutino said. "It gets people to slow down and pay attention to each other and creates affinity across age, race, gender — all of our different identities. Pancakes can be a conduit for that."