Palace 9 Caters to Aria Heads with the Met in HD 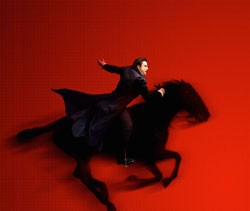 Want popcorn with that? Soda? Junior Mints? Concessions accompany the concert when Palace 9 Cinemas in South Burlington serves up the Metropolitan Opera’s “Live in HD” series this year. According to the movie theater’s general manager, Gail Clook, the Palace bought a new digital projector “specifically for this” — “this” being high-definition broadcasts, via satellite, of the entire performing-arts season of New York City’s famed opera company. Distant audiences have the advantage of bird’s-eye views of the entire stage, and they can watch “extras,” such as interviews with performers, while the singers in Manhattan take an intermission. Of course, it’s also a chance to take a pee break during a three-hour-plus production.

Last year, Dartmouth College’s Hopkins Center introduced the Met’s HD series to North Country opera fans; an enthusiastic reception encouraged programming director Margaret Lawrence to bring it back this year. Just weeks ago, the newly renovated Middlebury Town Hall Theater announced it would be carrying the series — though only half the season, starting in January. Now that world-class opera is also playing next door to, say, High School Musical 3 in South Burlington, will the Met on HD compete with Vermont’s scant local opera performances (see page 19A)?

Clook doesn’t think so. “I have a feeling they won’t hurt any live productions,” she says of the series, which includes 10 operas through the 2008-2009 season, with an encore screening of each two weeks later. One thing’s for sure: The Palace will be attracting more white-haired theatergoers. “There’s certainly a lot of interest among older people,” says Clook. “[Theater owner] Harold Blank initiated it. He thought it was a way to broaden our audience.”

No word on whether Vermont opera fans are dressing up for the shows. You could be the first.

The next Metropolitan Opera HD production is John Adams’ Doctor Atomic, on Saturday, November 8, at 1 p.m.; encore show is Wednesday, November 19, at 7 p.m. Tickets for the first screening are $24; encore shows $20. For the complete schedule, or to order advance tickets, visit www.palace9.com.