In the weeks preceding the inauguration of president-elect Donald Trump, artists worldwide have generated imagery that represents their reactions to this reality. Some are positive, but most convey a range of negatives from ridicule to anger to fear.

In the mostly blue state of Vermont, artists have contributed to this visual commentary in various ways, but none to date has had a "viral" impact. That could change, if musician and longtime Brookfield resident Bobby Gosh has his way.

Gosh and his wife, Billi, are passionate art collectors, and among their trove are some 75 paintings by Morrisville-based Philip Hagopian. One 2004 work, titled "Time Bomb," depicts an ape holding planet Earth in its hands. This Earth has a lit fuse — think the spherical black bombs in, for example, cartoons featuring Wile E. Coyote. Never mind that bombs haven't looked like that for a very long time; we all "get it" instantly. Planet Earth is imperiled.

While going through his collection recently, Gosh took a look at that painting and instantly got something else in his mind's eye: Donald Trump in place of an ape. And he wanted Hagopian to paint it. But not for his private collection; Gosh wants to see this image out in the world, through social media, as giclée prints, as posters. In other words, messaging à la Shepard Fairey's iconic "Hope" image of Barack Obama. In this case, the title of the work would be, naturally, "Make America Great Again."

"I thought, Man, if that [painting] was Trump, it would be a picture worth a thousand words," Gosh says. "I have a history since Nixon of writing protest songs. If you want to make a protest, this is it."

So, Gosh continues, "I contacted Philip, and he went for it."

"Bobby had an epiphany of putting Donald hair on the [ape]," Hagopian says. "People were already spoofing on that link between his orange hair and an orangutan, but I hadn't seen any painted hybrid versions."

Hagopian finished the 18-by-24-inch painting in four days — or "two days of looking at it and two days painting," as he puts it.

Gosh began by sending the image to friends, "and the reaction is tremendous," he says. Now he's having limited-edition giclée prints made. If social media ignite demand, he adds, "We'll go to a company that makes posters. The main thing is to have the image out there, and, if something happens, we'll take it from there." 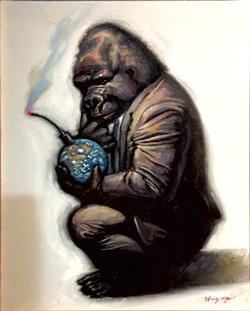 Gosh notes that marchers in Montpelier this Saturday, January 21, just might see a few orangu-Trumps on sticks.

If that populist approach is new to Hagopian, political engagement is not. The 57-year-old artist says he's "been painting social realism for about 30 years — dealing with social, political and environmental issues." Indeed, some of Hagopian's work has incorporated images of militarization, human oppression and capitalist/consumerist excess.

The Trump/orangutan image of "Make America Great Again" may appear to be in the same vein, echoing the simplistic yet loaded catchphrase in its presentation of an easily graspable, highly volatile subject. Yet the bulk of Hagopian's oeuvre is far more complex and sophisticated.

While the artist has turned out lovely portraits, still lifes and landscapes, as his website reveals, his richly hued multimedia work layers concepts and styles in a surrealist manner. The word "painting" is inadequate to describe a canvas that has been collaged with objects such as clockworks, scattered with symbols and sectioned into seemingly unrelated vignettes. Each piece offers portals into parallel universes, as if Hagopian cannot confine himself to just one. The effect is dreamlike, even mystical.

So what does the new painting mean to him? "So many disclaimers ... This painting of Donald Trump is symbolic of a government that generally works in the direction of the corporate profit margin," Hagopian responds. "So it's not specifically an anti-Trump image, but it's used because he's very overt in representing those interests.

"I'm not really attacking Donald Trump or his followers — that's very important," Hagopian clarifies. "But never in my life have I seen a society so divided. It is almost a powder keg."

Given that seemingly bridgeless chasm, it remains to be seen whether a painting of the president-elect holding that powder keg can, as Hagopian would like, "create a dialogue with Trump followers." Yet the artist insists that the central value he has expressed in the image holds universal interest: the sustainability of life on Earth.

"Even if the [artwork] provokes attack," Hagopian concludes, "that's the beginning of a dialogue."