Painter Will Clingenpeel Pushes Beyond Limits 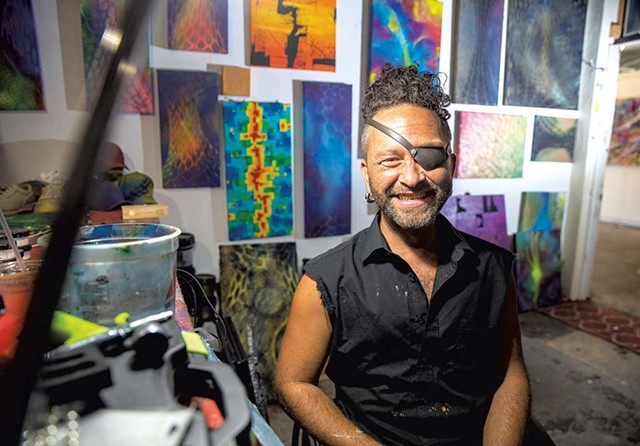 Seven years ago, artist Will Clingenpeel dreamt he was hurtling face-first through a supernova of all the colors he had ever seen. When he woke up, the vision in his left eye had gone black-and-white and muddy-warped, like the view through a dirty window on a rainy winter day. At first, Clingenpeel felt like he'd developed a superpower, an ability to experience the world in multiple dimensions simultaneously.

Eventually, his friends convinced him to see a doctor, which is how he learned he had multiple sclerosis, a chronic condition in which the immune system attacks nerve fibers in the brain and spinal cord. There is no cure for MS; its progression results in the gradual, often unpredictable loss of sensation and motor function.

Clingenpeel, now 41, uses an electric wheelchair to get around and wears a patch over his left eye, which gives him a slightly mystical appearance. He lives in Cathedral Square, a senior apartment complex in downtown Burlington, where he is the youngest resident by several decades.

Clingenpeel, who goes by the moniker Will C., rents an alcove at Green Door Studio, a warren of artist studios tucked behind the Howard Space in the South End. He enters the building through the garage, using a clicker on the arm of his wheelchair. ("It makes me feel like Batman," he explained.)

Even before his vision changed, Clingenpeel felt color in the same way other people feel warmth or boredom or hunger. Too much yellow and orange afflicts him like a fever; even with his color-blind eye, he experiences one particular shade of deep indigo blue as a luminous, almost ecstatic presence. When Clingenpeel works in his studio, his own paintings sometimes overwhelm him.

"Think about kittens," he said. "Say you love kittens, but you suddenly found yourself flying at Mach speed through a vortex of kittens. That's what it feels like for me to be surrounded by so much color. It's a cacophony! It's too much!"

Clingenpeel's paintings look like the kaleidoscopic montages that flash across the insides of your eyelids when you close your eyes in bright sunlight. They're trippy and hypnagogic, fantasias of color and shadow and reticulated forms that seem to be floating to the surface of something murky and deep.

He often makes his own paints from scratch, using UV-sensitive pigments and crushed crystals or mineral powders for texture. To create those partially submerged-looking mesh patterns, which have become a primary feature of his aesthetic, Clingenpeel uses fishnet stockings, torn garments or anything else he can manipulate as a vehicle for paint absorption. Standing slightly to the left or right of one of his canvases has the same effect as pulling one string in a cat's cradle, warping the whole composition toward a different vanishing point.

"I love creating things that are close to impossible to accurately capture on a camera," he said. "I have actually gone out of my way to make colors and shifting pigments that would take two videos and five photos to show online."

Sometimes, Clingenpeel reverse-image searches his own paintings, just to see what Google's algorithm makes of his work. "I love it when the things that come up are these insane, psychedelic, computer-generated images," he said. "For me, the mesh is all about connection, and I love that it tricks the digital stuff. It goes back to the mathematical aspect of creation — like, computers and people aren't different. Everything is literally, physically connected. We're all just vibrating."

Clingenpeel grew up on a dirt road in Sunderland, a town of fewer than 1,000 people. To him, being an artist is an essentially spiritual vocation, an orientation to his entire life rather than a particular mode of expression. According to family mythology, he showed his first signs of creative ambition at age 3, when he invited his mother to behold the masterpiece he'd created on his bedroom wall, using the contents of his brother's diaper as a medium and a stuffed animal as a paintbrush.

At 16, Clingenpeel dropped out of high school, passed his General Educational Development test and drove to San Francisco with a few friends in a 1980 Dodge Aspen. (It croaked, poetically, just as they coasted through the intersection of Haight and Ashbury streets.)

At various points, Clingenpeel has chanted with the Hare Krishnas in Golden Gate Park (the Krishnas compensated him in the form of fruit), trimmed coconut trees in Maui, owned an organic flower farm and landscaping business in Stratton, and worked as a tattooist in Winooski. (His cousin, Andrew Clingenpeel, is a tattoo artist in Brandon.) He is fairly confident, though not completely certain, that he was once Burlington's first insured fire performer.

For several years, Clingenpeel was a buyer for Old Gold, a vintage clothing and costume shop in downtown Burlington; this spring, he painted a mural, reminiscent of shed python skin, on the façade of its new storefront on Cherry Street.

"I close my eyes. I see colors. It's all resonance." Will Clingenpeel tweet this

Over the years, Clingenpeel has given away or sold most of his possessions, except for a hand-carved cedar flute he bought from White Raven Drum Works in Bridgewater Corners when he was 15 years old. Almost every evening at sunset, he gets out of his wheelchair, props himself against the nearest tree and plays a few long notes.

"I constantly feel like I'm suffocating in the city," he said. "All I can hear is buzzing electric, but that flute is my pause and my grounding. I close my eyes. I see colors. It's all resonance."

Clingenpeel isn't particularly bummed about this year's muted rendition of Art Hop. "The people who come will actually be coming for the art — and, in a sense, they're kind of risking their lives to see it," he said. "I love that it's not about the food and the booze, the spectacle."

From September 11 through 13, the current tenants of Green Door — Clingenpeel, painter Nicole Christman, jeweler Jon Black, and mixed-media artists Steve Sharon and Scottie Raymond — will open their studio for a group show with several other Burlington artists, including Jelani O'Connor, Jeff Bruno and Jason Pappas.

In the weeks leading up to Art Hop, Clingenpeel embarked on a series of paintings that appears to mark a radical departure from his dizzying pattern reveries. His most recent canvases are quieter, more reflective: a tall, brooding rectangle of off-white against a storm-cloud blue background; a prismatic gradient of reds, yellows and cool greens with a rough, scalloped surface, a textural effect that Clingenpeel achieved by using his hand like a palette knife.

This shift to minimalism is due in part to the progression of his MS. Over the last month, Clingenpeel has lost feeling in his left hand, making fine brushwork increasingly difficult. But his work doesn't depend on any specific technique, nor does he even believe that "his" work belongs to him in a possessive, authorial sense. His art, Clingenpeel said, has always been about tapping into the cosmic, allowing himself to channel his wellspring of creativity, which always finds a new outlet.

"Knowing that my vision and my abilities are finite doesn't scare me; it pushes me," he said. "So I allow myself to be an ever-changing conduit — just like a pipe slowly rusts and cracks, but it can still carry water."