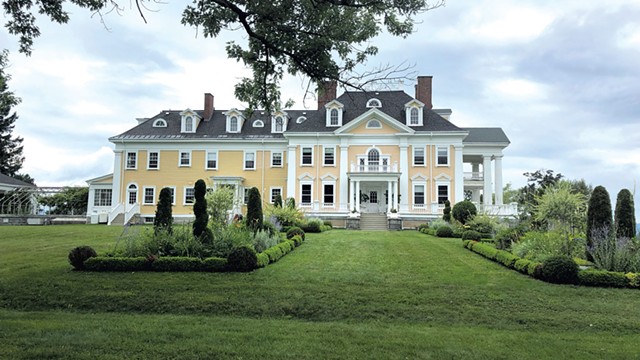 Almost any posh hotel or resort offers valet parking so guests can rest assured that their BMWs, Land Rovers or McLarens will remain safe and sound. But how many luxury lodgings also offer a primo spot for your horse, or a tune-up station for your mountain bike? In Vermont's Northeast Kingdom, there's at least one: the Inn at Burklyn.

Opened in August 2020 following an extensive renovation, the 14-room bed-and-breakfast in East Burke offers just about the swankiest digs this side of the Connecticut River. Some of that is due to the deluxe amenities, including gourmet dining, an on-demand personal barber and horse stables. There's also easy access to the Kingdom Trails mountain biking network, rated the best in North America by Bike magazine. But it's really the 1908 neoclassical mansion, as well as its showstopper setting, that bring the ritz.

According to Jim Crone, who moved to Vermont to buy Burklyn a little over two years ago with his wife, Marci, "It's just a beautiful house." That's a bit of an understatement.

Burklyn Hall was originally the country home of New York City hotelier Elmer Darling. Nestled along a high point of the Darling Hill ridge, it has stirring valley vistas and panoramic views of both the Green and White mountains. Darling, a Burke native, built the manor as the centerpiece of his 1,400-acre country estate. Another remnant of this can be found just a short stroll down Darling Hill Road, at what is now the Inn at Mountain View Farm. 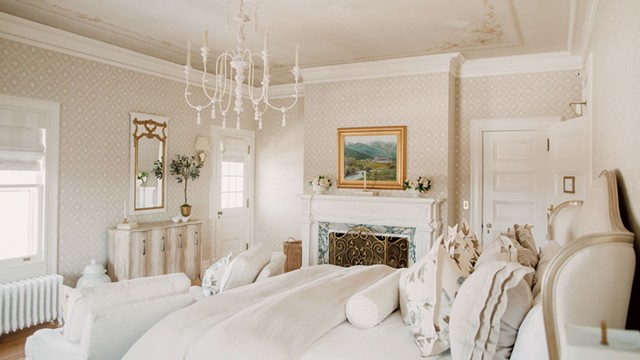 No expense was spared in building Darling's lavish 31-room, 13,600-square-foot dream home. Its granite was quarried at nearby Kirby Mountain, and most of its lumber was milled from Darling's own land. Marble was imported from Italy and Africa. Burklyn Hall was also state-of-the-art in its day, featuring central vacuuming, elevators, and gas and electrical lighting.

Darling died in 1931. The following decades brought a succession of owners and, perhaps inevitably, the grand mansion's decline. That included several years in the 1970s when Burklyn Hall was used as a Lyndon State College dormitory housing 40 students and staff.

"The house took quite a beating in those days," Jim said.

As they planned their renovations, the Crones immersed themselves in the history of Burklyn Hall, and Darling himself, to meticulously re-create the feel of the original manor.

"We tried to keep the style of what we thought Elmer Darling would want today," Marci explained.

That meant preserving as much of the mansion's original detail work and structure as possible. Any remodeling kept the original in mind, often at great effort and expense.

"We wanted to do it exactly like they would have back in the day." Jim Crone tweet this

For example, the grand staircase at the heart of the central hall had about 40 damaged or missing balusters. But ornate balusters from 112-year-old Colonial Revival mansions aren't the kind of thing you buy at Home Depot. So Jim, a former contractor, had them custom-made in California. And he enlisted a North Carolina company to make custom router bits in order to re-create or repair damaged molding on-site in the basement woodshop.

"We wanted to do it exactly like they would have back in the day whenever possible," Jim said.

The painstaking work paid off. As one Tripadvisor reviewer from Concord, N.H., wrote last November, "The thoughtful renovation of the mansion to honor the history and tastes of the original owner were truly noble." The building, he added, "is flawless, and it feels like you've stepped back in time whenever you enter."

Of course, certain modern amenities are preferable to the originals. The Crones "refreshed" and modernized Burklyn's bathrooms into mini spas with marble and tile. But even here they drew on original design elements: The legs of new vanities, for example, exactly mimic the stair balusters.

"Highly recommended for anyone looking for a weekend stay in a setting not seen since the early 1900s," enthused another reviewer. "Unforgettable and worth every penny."

The Crones' research into Burklyn resulted in some playful details, as well. After discovering that Darling kept peacocks on the property, Marci used wallpaper with the showy birds in the informal dining room.

That same attention to detail is paid throughout the Burklyn experience, from luxury linens to locavore beer-and-cheese tastings to afternoon cocktails in a tony private lounge called Darlings.

"We want you to feel pampered in every way possible," Marci said. (Note: Said pampering requires leaving your little ones with a babysitter. Burklyn is adults-only.)

While Burklyn clearly caters to an upscale and mostly out-of-state clientele — or will, post-pandemic — the Crones have taken steps to make Burklyn more accessible to the surrounding area.

"We knew how much the house means to the community and how much Elmer Darling meant," Marci said. "Even though we're not from here, we wanted to be sure the place didn't fall apart."

She added, "So many people tell us they've driven by it their whole lives but have never been inside."

To that end, the Crones recently launched an on-site restaurant, the Springhouse, that's open to the public — the name and menu will change seasonally. For many locals, eating there is the first time they've been able to visit the manor.

"We wanted to open it up to people," Jim said.

That's also why the Crones worked with Kingdom Trails to tie Burklyn's 84-acre grounds into the trail network. Previously, a handful of surrounding landowners had revoked access to the trails from their properties, creating gaps where riders had to divert to the road. The Burklyn single-track, installed last year, slices through a broad, scenic meadow and compensates for some of the lost connectors.

As it turns out, mountain biking is what led the couple to buy Burklyn, at least indirectly. Marci recalled that her mountain-biking cousins in New Hampshire, Bob and Sharon Morse, would send the couple, then in California, pictures of the mansion when they rode past, along with jokey texts like, "We found your new home!"

The Crones, who had no previous experience running an inn, didn't take the texts seriously — until the day they did. One afternoon, Jim called Marci into his San Diego office and pulled up a real estate listing for the house on his computer.

"He said, 'Pack your bags. I'm putting in an offer, and we're going to look at it this weekend,'" Marci recalled. "To make a long story short, we fell in love with this house."

They surely won't be the last.

The original print version of this article was headlined "Rest and Restoration | Painstakingly renovated, the Inn at Burklyn offers luxury and easy access to Kingdom Trails"

Speaking of Inn At Burklyn