When Kerry Walker's unemployment insurance payments halted without explanation in June 2020, she called the Vermont Department of Labor repeatedly to find out why. Eventually, she learned that there was a problem with her Social Security number.

She'd never heard the number questioned before, and nobody she talked to at the state could explain just why the labor department's dysfunctional 50-year-old computer system had snagged on her claim. Weeks later, Walker, a massage therapist and yoga instructor in Huntington, got a letter saying her claim had been dismissed.

Walker is one of the thousands of Vermonters whose lives and finances were upended by the pandemic — and by the computer-related problems that erupted when Congress handed state labor departments the task of sending money to people who were suddenly out of work.

"We're not building it ourselves; we're putting together best-of-breed technologies." John Quinn tweet this

The pandemic highlighted problems with the Vermont labor department's outdated computer system, which was overwhelmed by claims in March 2020. The system did not have the computing capacity to help claimants such as Walker, many of whom reported spending hours on hold with call centers.

The existing online system has no way of collecting claimants' email addresses; those filing for the first time must talk to someone on the phone who collects the information manually and enters it into the computer. A limited online system exists for those who already have filed initial claims. A new online claim system created to help speed the process during the pandemic was taken down after it was flooded with hundreds of thousands of fraudulent claims.

At the root of the problems is the department's reliance on a mainframe from 1970 with limited computing power. The mainframe runs on a language, ancient by programming standards, called F COBOL, which predates the also ancient COBOL. People who know F COBOL tend to be in their seventies. When the pandemic struck, the department was already short on staff who knew the mainframe.

Finding people who know F COBOL is difficult enough; finding ones who understand the weekly benefits system and how it has been configured over the last quarter century is nearly impossible, said Labor Commissioner Mike Harrington.

"We were already kind of limping along, having challenges managing the load even before the pandemic," he said. "The fact of the matter is, we had eight to 10 people answering our phones. We had six people adjudicating cases."

As workplaces shuttered, unemployment claims in Vermont soared from about 6,000 a week to as high as 95,000 per week. Claimants such as Walker reported myriad maddening problems.

Ordered by the federal government to create new online forms, the department developed ones that were almost impossible to fill out. Self-employed people were required to list an employer — although they didn't have one — in order to gain access to the system. Calls to the department went unanswered, and when contractors were hired to help with call volume, claimants complained that the people who answered the phone had no access to the computer system, so they couldn't answer questions.

In the absence of computing power, human mistakes were legion. The labor department mistakenly gave out a southern Vermont woman's phone number to claimants who asked to speak to a manager. A collating error sent thousands of claimants' Social Security numbers to strangers' mailboxes.

Labor commissioners have been saying for years that replacing the mainframe is key to modernizing the department's unemployment insurance operations.

"It's an oversized server that processes a lot of simplistic data," said John Quinn, who leads the state's Agency of Digital Services and has been involved in the labor department's emergency response since the pandemic began.

The state is now working on a $30 million overhaul.

"It's elderly; it's on its last legs," Sen. Randy Brock (R-Franklin), who chairs the Joint Information Technology Oversight Committee, said. "It needs a lot of work and pampering and Band-Aids just to keep it running."

Walker, the massage therapist, finally gave up on the time-consuming work of trying to get answers from the state and started seeing her massage clients again.

Vermont had been looking at ways to modernize the labor department system long before the pandemic. In 2014, it entered an agreement with Idaho and North Dakota to create a new system. That ultimately fell apart because of incompatible regulations and timelines among the three states. Vermont had invested more than $10.5 million in federal funds before walking away.

Last year, Harrington asked lawmakers for $4 million to kick off an effort to move the unemployment insurance services to the cloud, basing the part of the system that claimants use on the popular software provider Salesforce, which some other state agencies use already. The motto of San Francisco-based Salesforce: "Keep your customers happy anywhere."

Lawmakers rejected that request last year, choosing to wait and see whether the federal government would pay for the upgrade.

"The commissioner has said openly to us that if you ask us to do anything else to modify how this thing works, you have the potential for a catastrophic collapse," Brock said. "The legislature didn't pay attention to the warning this past session."

But this year, lawmakers did agree to appropriate state funds to fix the problem. The department expects to pay $3.5 million for the first phase of a four-phase plan to modernize the system. Legislators have also ordered an independent consultant's review of the existing system and of options for replacing it, including those used by other states. The report is due by December 15.

Complete replacement of the unemployment insurance system is expected to cost about $30 million and take a decade to complete, Quinn said. In the end, Vermont will have a cloud-based system.

As for the mainframe, "Use it as a boat anchor," Quinn said. 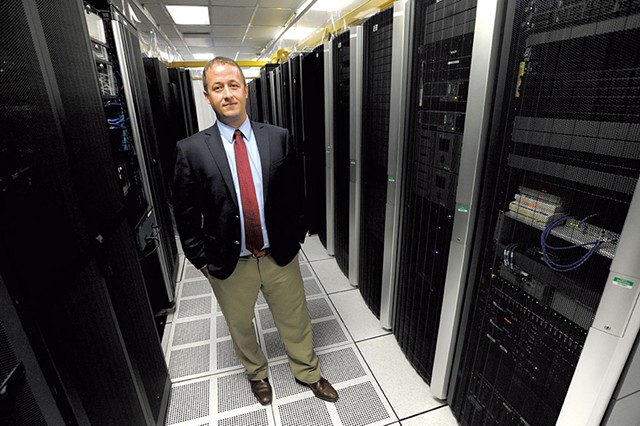 The new system will enable jobless people to check the status of their claims, said Harrington — just as many patients can log on to review medical test results.

If another emergency occurs, even one the size of the COVID-19 pandemic, the new system will be built to handle it, Quinn said.

"I want to make sure the DOL system is scalable, whether it's a massive influx of people or the number of services offered," Quinn said.

His office is finishing an RFP seeking a company to build a portal for claimants and employers. That's expected to take up to 18 months.

"These companies that we use, whether it be a Microsoft or Salesforce or Oracle, are massive companies with massive data centers all over the U.S.," he said. "These big companies can scale out enough to offer these services to multiple states."

At the end of the first phase, Quinn said, workers and employers will be able to log in to a functional online system that will help the department organize claim information more efficiently.

Through the other phases, the mainframe will be replaced, and the department's data and services will migrate to the cloud. Quinn said that's a more secure way to store data, and using proven technologies will save money.

"While people may think, Oh great, another big website, this is way different," he said. "We're not building it ourselves; we're putting together best-of-breed technologies."

That's an important distinction, say lawmakers who have witnessed previous attempts to develop state computer systems such as Vermont Health Connect. That system, created in 2013 for the state's health insurance marketplace, was plagued with technical problems from the start. The state ultimately fired a consultant who had been paid millions to build it. Some of the functions that were supposed to be automated are still being completed manually.

The Department of Motor Vehicles and the Vermont Judiciary both launched system upgrades about a decade ago that failed. The judiciary recently tried again, rolling out an electronic case management system that replaces paper record-keeping. It has not been accompanied by hardware upgrades at public access terminals, leading to frequent computer crashes at some courthouses.

There are also success stories, such as the system overhaul at the Department of Taxes.

"We hired someone else to do the whole thing," said former state senator Tim Ashe. "That project has been one of the ones that left very few people with migraines."

It's a clear sign the state isn't equipped to create a custom system, Ashe said.

"It's not that we don't have a very dedicated IT staff, but the most sophisticated IT operations are not in state governments," he said. "And then, of course, most people don't run for governor or for the legislature because they want to micromanage IT projects."

Sen. Jane Kitchel (D-Caledonia), chair of the Senate Appropriations Committee and vice chair of the Joint Fiscal Committee, said that past IT missteps have led to important changes, such as a contract with an independent consultant at the legislature's Joint Fiscal Office who reviews big tech projects. Like Ashe, Kitchel said it's clear that an off-the-shelf product is the way to go.

As for Walker, the Huntington massage therapist, the termination of her benefits in June 2020 remains a mystery.

"A couple of months later, I got a piece of paper in the mail saying they had dismissed my claim, with no explanation, no nothing," said Walker.

"I am OK, but there are so many people hurting," she said. "I knew if it's happening to me, it's happening to other people. I think about all the people who are homeless, or what my experience would be for someone else who may not have a spouse who has a decent income, and what that would have meant."

The original print version of this article was headlined "Update Now?"