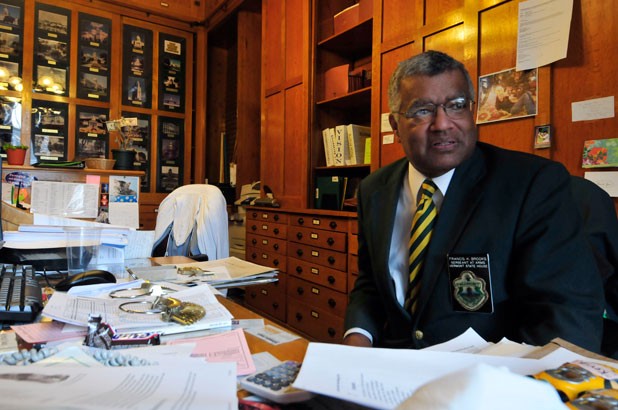 Francis Brooks, sergeant at arms of the Vermont legislature, has devised a simple way of describing the responsibilities of his job. “If the inside of the [Statehouse] is considered a town,” he explains, “then I’m the town manager.” That means he supervises everyone from the custodial staff to the Capitol Police Department.

Brooks’ “town” also includes a school system of sorts: the legislative page program. Each session, he’s charged with selecting 30 eighth graders from a pool of more than 150 applicants from across Vermont. For six months, these 13-year-olds don the requisite green sports jackets and serve as errand boys and girls, ferrying phone messages, bills, faxes and other important — and sometimes not-so-important — documents to state lawmakers and their staffs.

On the morning of Gov. Peter Shumlin’s inauguration last week, a gaggle of newly minted pages sat outside Brooks’ office in the Statehouse lobby, anxiously poring over a facebook — not the online version but a printed one that features the names and photos of all 30 senators and 150 representatives. Within days, these teens will need to be able to pick them out of a crowded room.

Brooks, 67, is a soft-spoken, bespectacled man with salt-and-pepper hair and a slightly stooped gait. Despite his advancing years, he still knows a thing or two about communicating with young people. Before becoming sergeant at arms four years ago, Brooks spent 32 years teaching chemistry and physics at Montpelier High School. He also spent 25 years as a legislator himself.

None of Brooks’ own children, now adults, ever applied to become pages, though he says his son spent a lot of time in the Statehouse while Brooks was in office. He recalls driving home one day and hearing a political ad on the radio. As Brooks reached over to change the station, his son said, “Hey, what are you doing? I was listening to that!”

“I hear that same kind of story all the time,” he says. As Brooks puts it, just being around the political process makes people’s interest come alive.

SEVEN DAYS: How do you go about selecting pages?

FRANCIS BROOKS: Very carefully! I have to select 30. Probably the first 20 or so are relatively easy because [of] some of the things we do to select them. That is, I always try to get a page from every county, so when you have a county that has only one or two [candidates], it’s relatively easy to concentrate on them and make sure they’re qualified. Then I try to have someone in the page program that represents something other than the standard educational system, meaning private school or homeschooled … I then count the number of males to females, percentage-wise, and if, let’s say, 30 percent of applicants are boys, then I try to select [only] 30 percent boys.

SD: Do you typically get more girls than boys applying?

FB: Oh, yes. It’s always been that way. I only can venture to guess that it’s not a “boy thing” initially. Once they get here, they love it.

SD: What’s the hardest job for pages to learn?

FB: Look at these poor kids who came here on Wednesday, and the place is immediately in full gear. They didn’t know where anything is in the Statehouse. They don’t know the names or … if I say, “Please take this to Representative Smith,” do they know who that is? To cram all that in is probably the most difficult. But they almost always have the willpower and intelligence and fortitude to conquer all that. By this time next week, they’ll be running this place!

SD: How do you get them over their initial nervousness?

FB: At the beginning you can hardly get ’em to say a word until they get used to the situation. With all of these people, that’s pretty overwhelming. We say [to them], “Walk into a room, be assertive and say, ‘I’m looking for…’ as if you’re in charge.”

SD: Seen much of a change in the pages over the years?

FB: Well, I had a somewhat different relationship with them when I was a legislator … I wasn’t their boss as such. I can say that I have not noticed a real difference once you tear [away] any of the exterior baggage or façade. Children are children.

SD: What’s the most important lesson they learn in the legislature?

FB: I think they get to see not so much that government is working, but to check out that there are human beings here and there’s an attractiveness — or maybe even a disappointment — when dealing with human beings. And I think this is what causes the most excitement for pages, who leave here, [and] most are injected with the political bug. Not necessarily to run for political office, but they’re interested to be around it, to hear about it…

SD: How’d your new pages do on their first day?

FB: Well, I’m still standing, and everybody else is, too.