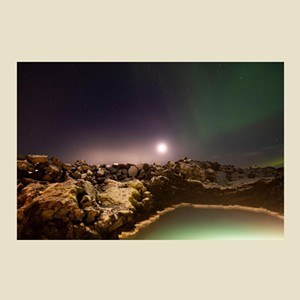 From an obsidian void of silence, blips of light come to life. A sort of acid-trip take on tubular bells drifts out of the dark like an alarm clock going off in a dream, followed soon by the soft wash of synthesizers. I release a breath I didn't realize I was holding as "Radio Silence," the first track on Page McConnell's new record, drifts by with all the austere loneliness of the last glacier slipping into the sea.

A haunting exploration of solitude, Maybe We're the Visitors is something of a sonic departure for McConnell, who is best known as one-fourth of Vermont's most famous band, Phish. With the jam-band titans, McConnell's dexterous piano, organ and clavinet work is a key element in the group's sound. He abandons all of that on his latest LP, instead opting to craft a record completely with synthesizer. It's a tool McConnell had largely avoided in his career before now.

"I always imagined that I would have synths," McConnell reveals in the album notes, written by Rolling Stone senior editor David Fricke. Unlike artists such as David Bowie, who famously would buy gear and immediately throw away the instructions, McConnell didn't want to use synthesizers until he truly understood both their complexities and their possibilities.

"I had to understand the gear, and it had to work with me," he told Fricke. "It was always my goal to get to this point — where the synths inspire me and the melodies."

McConnell has clearly reached that point. Over nine tracks of blissfully ambient electronic music, the Goddard College alum crafts an eerie world as beautiful as it is alien. The record itself is a lesson in sparseness; on each track McConnell shows incredible restraint and patience in his playing.

On "Terra Incognita," he lets a little light shine through. A beat processed to the point where it sounds like an idling engine runs steadily through the song, laying a foundation for McConnell's acute melodic sensibilities. With a deft hand, he fills spaces with care and precision. Maybe We're the Visitors plays like a puzzle solved slowly.

McConnell began work on the album following a vacation to Iceland just before the pandemic. The primal nature of the volcanic island nation — the wild beauty and panoramic landscapes — inspired him to turn to his synths. He even recorded some songs at a geothermal spa in a lava field, including the haunting "Moss Suite, Pt.1." The track would be right at home on the Blade Runner score.

The record marks a fascinating turn from a member of the institution that is Phish. Die-hard fans will insist this sort of eclecticism is part of the band's appeal, but it's safe to say there is nothing even remotely close to Visitors in Phish's catalog.

It's refreshing to see something new from a musician of McConnell's caliber and renown. But the quality and strangeness of Maybe We're the Visitors is such that it stands on its own, wholly apart from its creator's past.

Stream Maybe We're the Visitors on all major streaming services, or preorder the vinyl at drygoods.phish.com.