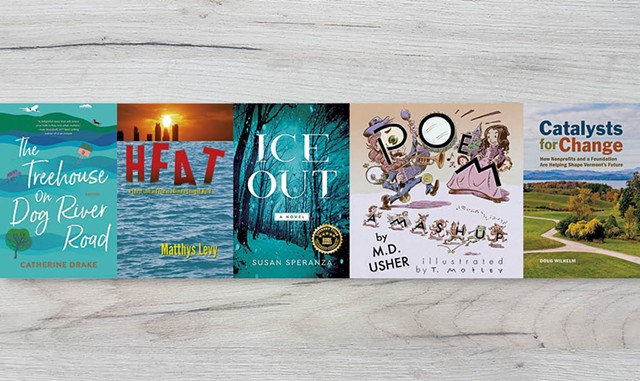 Seven Days writers can't possibly read, much less review, all the books that arrive in a steady stream by post, email and, in one memorable case, an army of spongy moths. (Ugh!) So this monthly feature is our way of introducing you to a handful of books by Vermont authors. To do that, we contextualize each book just a little and quote a single representative sentence from, yes, page 32.

The Treehouse on Dog River Road

Heading straight for Pinterest, she typed "Vision Board" in the search box.

Can you Pinterest your way out of an existential crisis? Twenty-eight-year-old Hannah thinks so. The protagonist of Catherine Drake's first novel, The Treehouse on Dog River Road, has taken a voluntary layoff at her Boston-based investment firm. She needs to clear her head, reevaluate her priorities and make a new plan. Time for a vision board!

Hannah's sister, Molly, and her husband, Ted, are college professors and research scientists embarking on a monthslong project in South America. They've asked Hannah to take care of their 6- and 4-year-old kids for the summer. Perfect timing! Their Waterbury, Vt., home offers stunning views of the mountains — not to mention views of the sexy carpenter who just moved in next door.

In the opposite place from her professionally flourishing sister and brother-in-law, Hannah doesn't know what she wants, only what she doesn't. A Green Mountain summer, a treehouse-building project and a friendly stranger seem like just the ticket to help her figure things out.

HEAT: A Tale of Love and Fear in a Climate-Changed World

What used to be paradise is now a dying landscape.

Albert Drake is distraught as he describes the view outside his Miami window. It's the middle of the 21st century, and the high-end retirement community he runs, his only source of income, is being destroyed by the climate crisis. He has moved all but eight residents to other communities far from the rising sea and "north of the heat zone." But now a huge hurricane is building off the coast of Africa, and Drake must move the remaining seniors as quickly as possible.

Author Matthys Levy draws on decades of engineering and climate expertise to craft his second novel. For more than 60 years, Levy designed structures with New York City firm Weidlinger Associates (now Thornton Tomasetti), and in 2007 he published Why the Wind Blows: A History of Weather and Global Warming. His latest novel follows a group of people facing heartbreak and finding hope as scrubber satellites try to remove carbon from the upper atmosphere and millions flee uninhabitable homes.

When Francesca reached the surface, she flailed, then anchored herself to the ice...

Francesca Bodin has what seems like an idyllic life: a loving husband, a bubbly 4-year-old daughter, a teaching job she adores and a home in the woods. But her lifelong quest for perfection in all things comes to a shattering end when her family plunges through lake ice on a snowmobile. Francesca is left gasping for air, her daughter missing. Her husband, triggered by another long-concealed trauma — the death of his twin sister — has abandoned them both to die.

Susan Speranza's third novel, Ice Out, is set in two locales familiar to the author: Long Island and Vermont. Part romance, part allegorical fantasy, the story leaps between the life-or-death urgency of Francesca's predicament and an exhumation of her past. Upon finally freeing herself from the lake, she encounters a group of women who were similarly betrayed and left to die. Torn between competing desires for salvation and revenge, Francesca wrestles with existential questions as she struggles to discern what's real and what's a dream — or a nightmare.

Beyond the classroom, few people read poetry. With POEM: A Mashup, University of Vermont classics professor M.D. Usher aims to remind readers of its joys.

His book presents a cento, he writes, a patchwork poem stitched together from many voices, similar to a DJ sampling artists and spinning their music into a fresh, cohesive whole. Usher pulls from the canon of English-language poets — plus one Roman, as befits a classicist.

T. Motley's graphic treatment amplifies enjoyment and elucidation. The letters of Lewis Carroll's "Jabberwocky" weave through the body of a fantastical creature. The phrase "Some wander lonely as a cloud," slightly adapted from William Wordsworth, floats among fluffy clouds. Frogs regard their watery reflections through spectacles formed from the letters in an Emily Dickinson poem.

Equally illuminating are Usher's pithy essays on the 21 sampled poets. Of Robert Frost, he writes, "By most accounts, no one liked him." Poetry may be equally unpopular, but Usher and Motley make a compelling case for giving it another chance.

Catalysts for Change: How Nonprofits and a Foundation Are Helping Shape Vermont's Future

Imagine having a qualified, caring midwife never leave your side for a 12-hour labor.

Providing more "qualified, caring midwi[ves]" was the founding purpose of the Lintilhac Foundation, former Boston Globe reporter Doug Wilhelm writes in Catalysts for Change: How Nonprofits and a Foundation Are Helping Shape Vermont's Future. The book explores how community-based organizations have influenced activism in Vermont with a focus on the Lintilhac Foundation, which Claire Lintilhac established in 1975 to bring nurse-midwifery back into the health care system through the University of Vermont Medical Center.

The foundation has since expanded to advocate for causes such as land conservation, clean energy and responsible journalism. Crea Lintilhac, daughter-in-law of Claire, writes in the introduction that "we tell stories of the expertise, strategic accomplishments, persistence, and dedication of these organizations, which have worked to ensure access to health and welfare for all Vermonters." Wilhelm uses an effective combination of interviews, stories and images to keep the book engaging across 11 chapters as he covers those missions.

Books The Treehouse on Dog River Road Catherine Drake HEAT: A Tale of Love and Fear in a Climate-Changed World Matthys Levy Ice Out Susan Speranza POEM: A Mashup M.D. Usher Catalysts for Change: How Nonprofits and a Foundation Are Helping Shape Vermont's Future Doug Wilhelm