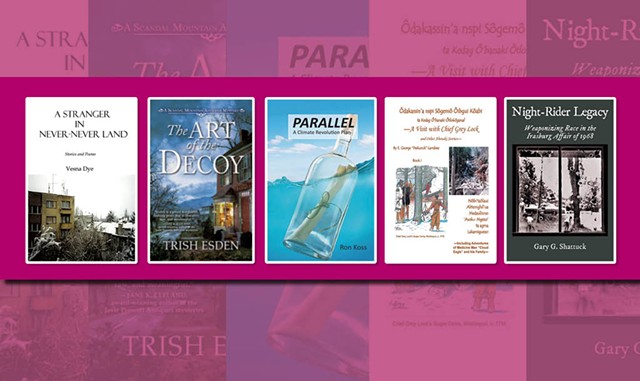 Seven Days writers can't possibly read, much less review, all the books that arrive in a steady stream by post, email and, in one memorable case, an army of spring peepers. So this monthly feature is our way of introducing you to a handful of books by Vermont authors. To do that, we contextualize each book just a little and quote a single representative sentence from, yes, page 32.

A Stranger in Never-Never Land

A narrow path up the hill led me to a mosque surrounded by several old stone houses.

A sculptor who flees from an island prison and survives in the wild. A young woman who "escape[s] into the wide world to become a poet." Nigerian students studying Croatian. A Muslim woman catching "The Last Bus" out of town just before an attack on her village in the Bosnian war zone.

These are some of the people we meet in Burlington author Vesna Dye's slim yet powerful collection of poems, prose reminiscences and stories that merge fact and fiction. Born and raised in Zagreb, Croatia, Dye immigrated in 1982 to the U.S., where she made a new home in California and then in Vermont. In a foreword, she describes herself as feeling "like a stranger in both of my homelands." But Dye is clearly at home in the world of words. She evokes her past in haunting images, suffused with the power of nostalgia: "Clear blue sky opens above young corn stalks. / ... / Your hair braided with sunflower petals."

The Art of the Decoy

Income from something like that could pay a lot of back bills.

Is every form of commerce cutthroat? Though PBS' "Antiques Roadshow" may portray the world of bric-a-brac, curios and memorabilia as a low-blood-pressure trade, it's rife with tension in Trish Esden's The Art of the Decoy. Set in the fictitious town of Scandal Mountain, the Vermont mystery centers on peripatetic freelance picker Edie Brown. Her family's antiques business is in trouble, as is her mother, who was recently convicted of art forgery.

Edie has run afoul of the law, too, for selling stolen property. But a call from her uncle alerts her to a cache of potentially valuable hunting decoys. Practically salivating over the first piece she sees, Edie sets her sights on snagging a decoy to get her family out of debt. When the collection goes missing, she becomes the prime suspect. The only way to clear her name is to dive deeper into the world of local relics, whose portrayal is likely inspired by the author's real-life antiques business.

So begins Chapter 6 of Ron Koss' impassioned plan for averting climate disaster. Cofounder of the first U.S. organic baby food company, Earth's Best, Koss presents a new paradigm he calls "parallel," denoted by the symbol "//." With it, he hopes to inspire "a mighty bucket brigade of small and large actions that add up to a transformation of how we live and consume on our Earth," he writes in the dedication.

Rather than propose the end of capitalism, Koss wants consumers to use their purchasing power to drive a parallel free market economy whose sole aim is to steward the planet. Banking, philanthropy, credit cards, lending and other activities would support decarbonization and ecological restoration.

Fledgling efforts already exist, Koss writes, such as credit cards that help consumers find carbon offsets for their purchases. He wants the daily news of species extinction, severe storms and rising seas to galvanize us on a huge scale.

Impossible? Crossing North America in five hours once seemed impossible, too, he reminds us.

A Visit With Chief Grey Lock and Other Abenaki Stories, Book 1

In order for Spirit to hearken to their prayers, women don't need to smoke the pipe.

Woodbury resident E. George "Peskunck" Larrabee is a Tribal Council member of the Abenaki Clan of the Hawk — and, as a friend's testimonial in his book notes, a former paratrooper and railway man, an expert on 18th-century wilderness survival, and an educator on Abenaki language and culture.

In this copiously illustrated volume, Larrabee uses traditional tales to educate his readers, opening with a prolonged visit to the camp of real 18th-century chief Grey Lock, who migrated from Massachusetts to Vermont and built a fortified town there. From the chief and his extended family, we learn about Indigenous hunting techniques (how does one catch a grouse using one's hat instead of a musket?), foraging, sugaring, warfare, smudging ceremonies and much more. We even learn that the Abenaki word for blackflies, gigue'ts'ze'gibsak, translates literally as "little no-neck ones." Stuffed to the brim with language and lore, Larrabee's book is a vibrant and engaging resource.

Night-Rider Legacy: Weaponizing Race in the Irasburg Affair of 1968

Every Vermont farmer owns a 30-30 rifle.

On the night of July 19, 1968, a white man shot up the Irasburg home of a Black minister and his family and that of a white woman and her two children. The Vermont State Police investigation of the attack, dubbed the "Irasburg Affair," focused initially on the crime's racial component. However, after troopers assigned to protect the family claimed to have witnessed a sexual encounter between the Black reverend and the white woman, a state prosecutor charged them with adultery, which attracted national media attention.

For Night-Rider Legacy, his sixth work of historical nonfiction, Shrewsbury author Gary G. Shattuck meticulously reexamined the Irasburg Affair and other incidents of the era that severely damaged the reputation of Vermont's largest law enforcement agency. A former VSP commander, Shattuck later served as Vermont's assistant attorney general and assistant U.S. attorney. Though his book explores policing, racism and inflammatory press coverage more than half a century ago, it seems particularly relevant in the post-George Floyd era.