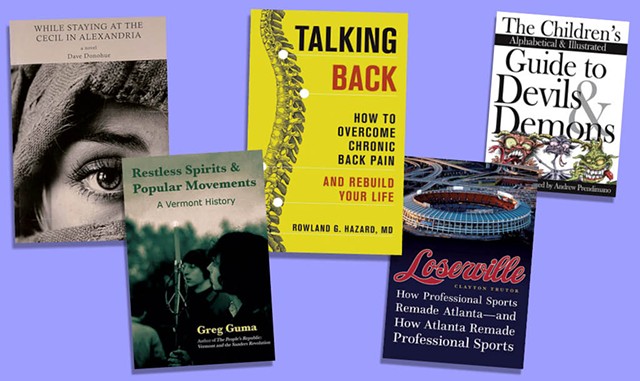 Seven Days writers can't possibly read, much less review, all the books that arrive in a steady stream by post, email and, in one memorable case, a snuggle of sloths. So this monthly feature is our way of introducing you to a handful of books by Vermont authors. To do that, we contextualize each book just a little and quote a single representative sentence from, yes, page 32.

While Staying at the Cecilin Alexandria

Whitmore noticed the man sit up a bit, listening to the literary references.

The world of 1970s Alexandria, Egypt, comes vividly to life in South Burlington author Dave Donohue's short novel, While Staying at the Cecil in Alexandria. Reworked from an old travelogue the author wrote about his experiences in the region, the story centers on several visitors staying at the grand Cecil Hotel. An homage to Lawrence Durrell's tetralogy The Alexandria Quartet, Donohue's novel similarly weaves a tale of four expats whose paths cross while sojourning in the ancient city. Their intersections gradually reveal their true natures.

Though the book is primarily a character study, the environment Donohue creates has just as much personality as the story's foursome. Alexandria bustles with activity, its streets full of captivating subjects. A peasant trains a baboon to shake down tourists for spare change. The harbor teems with vessels of all kinds. Sidecar motorcycles whiz down dusty avenues. And the central location, the Cecil, is an oasis of old-fashioned hospitality, classical aesthetics, and sumptuous food and drink.

The Green Mountain Boys used many types of force to impose their will...

Vermont's independent streak goes way back. In the fourth chapter of his history of the state, author Greg Guma details how a "struggle for sovereignty and self-government" drove the rebellious behavior of Ethan Allen and his Green Mountain Boys, leading to Vermont's stint as an independent republic.

Guma has written about the state and its politics for more than 50 years, first for the Bennington Banner and later as an editor of the Vanguard Press. He uses that experience to investigate the state's values — what he calls "the Vermont Way" — through the actions of its Indigenous people, revolutionary leaders, feminist pioneers, Vermont-born presidents and modern political figures.

The book is an expanded version of Guma's "Green Mountain Politics: Restless Spirits, Popular Movements," published online in 2017, and includes a Bernie Sanders-focused chapter that recaps and updates information from his 1989 book, The People's Republic: Vermont and the Sanders Revolution.

With detailed archival research — and Guma's own reporting — it's an engaging read that helps explain what makes Vermont Vermont.

Talking Back: How to Overcome Chronic Back Pain and Rebuild Your Life

There is no generic answer as to how much is the "right" amount of physical activity for everyone.

For more than 30 years, Dr. Rowland G. Hazard has helped patients disabled by chronic back pain. An emeritus professor of orthopedics at the Dartmouth Geisel School of Medicine, he pioneered a goal-achievement model of rehabilitation, in which patients take ownership of their health and objectives.

The first chapter engages readers with topics such as gauging how much they should physically be able to do, trusting their own knowledge of their bodies, and the fear of pain. The second helps them identify what they wish to achieve and chart a plan. Subsequent chapters address medical office visits, drugs, relaxation techniques, types of pain, and wellness.

Throughout the book, Hazard shares the experiences of more than 3,000 people who participated in his programs at the University of Vermont and Dartmouth-Hitchcock medical center between 1986 and 2018. In the preface, he writes, "I hope their collective voice helps you along your way to wellness."

Everyone, even you, makes choices to do something good or something bad.

In The Children's Alphabetical & Illustrated Guide to Devils & Demons, Burlington-based author-illustrator Andrew Prendimano personifies bad hygiene, impoliteness and impatience as literal monsters. By creating a compendium of devils and demons, he hopes that kids might recognize the real-life bad behavior these fictitious beings represent.

Many similar kids' books present taxonomies of mythical creatures. But Prendimano conjures up new beasts in this rogue's gallery rather than rehashing mermaids and dragons for the umpteenth time.

With gnashed teeth, forked tongues, jagged claws and bodies covered in glistening pustules, Prendimano's monsters are vividly realized and cleverly named for the abhorrent traits they embody. The listless blue "Ennuixxicuz" causes boredom and laziness "even though there are plenty of wonderful, creative and fun things you could be doing." Speckled green "Hummorousiqul" is the patron sinner of smart alecks. And purple, 10-armed dragon-worm "Wagglewagalyx" is the horned king of impulsivity.

In 1965, there were zero major professional sports teams in Atlanta; by 1972, there were four. The arrival of the last, the National Hockey League's Atlanta Flames, was the apex of civic leaders' decade-long effort to raise the city's national profile through pro sports.

But amid social and political turmoil, excitement for the teams burned out in Atlanta about as quickly as did the Flames, who were sold and relocated to Calgary, Alberta, in 1980. The move marked another low in the sports futility that led Atlanta Constitution writer Lewis Grizzard to dub the city "Loserville, U.S.A." in 1975.

In his new book, historian Clayton Trutor weaves together sports, politics, business and race to detail how Atlanta went from a sports desert to the first Southern city with teams representing all four major American sports leagues — and how it set the stage for today's uneasy marriage between sports franchises and city governments.