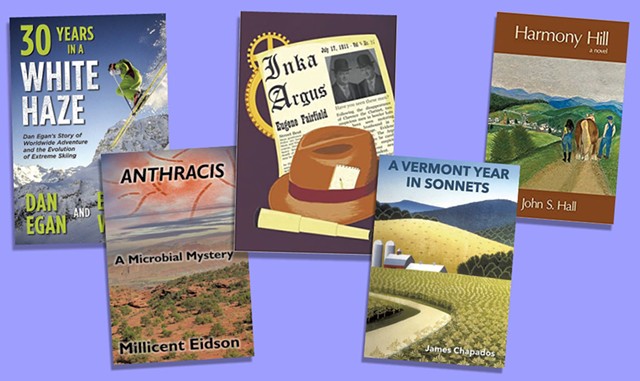 Seven Days writers can't possibly read, much less review, all the books that arrive in a steady stream by post, email and, in one memorable case, a banditry of chickadees. So this monthly feature is our way of introducing you to a handful of books by Vermont authors. To do that, we contextualize each book just a little and quote a single representative sentence from, yes, page 32.

A Vermont Year in Sonnets

The soundtrack of a small-town Independence Day parade is familiar to any Vermonter who's ever marched in a high school band or waved from an uneven sidewalk while troupe leaders attempted to wrangle banner-carrying scouts. The sirens — and screeching, depending on the band — herald high summer.

The sonnet "July" starts more quietly on page 31 of James Chapados' collection: "Up in the meadow on the hill bees hum // In the clover." Following the parade (our Page 32 quote), he returns to the tall grass, observing fireflies as "living constellations."

Such are the rhythms of life in northern Vermont, chronicled by Chapados through the course of a year. He takes the reader from his home in Eden to Martha's Diner in Coventry to the banks of the Winooski River.

The poet's reflections on some events, such as the parade or Town Meeting Day, are timeless. Others make it clear that the year being chronicled is 2020. The sonnet "Governor Scott" opens ominously: "When pestilence came to Vermont..."

Profit told Father that Mother must lern her duty to bless her husband every day of her life.

Take one highly disturbed drifter. (Page 32 is a fragment from his misspelled diary.) Add a pinch of anthrax bacteria that have been lying dormant in the arid southwestern soil for decades. Mix with some unsuspecting animals and people, and what do you have? The first in a new series of medical thrillers starring Maya Maguire, a young veterinarian who's just been hired as an epidemic intelligence service officer for the U.S. Centers for Disease Control and Prevention. Her first task: to stop a series of mysterious anthrax cases.

If a recent high-profile film had you wondering how well anthrax would really work as a murder weapon, Anthracis: A Microbial Mystery will answer your questions. Author Millicent Eidson is a doctor of veterinary medicine who teaches a course on zoonotic diseases at the University of Vermont Larner College of Medicine and has worked for the CDC and the New York and New Mexico health departments. Her expertise gives this intriguing "microbial mystery" a solid grounding.

30 Years in a White Haze: Dan Egan's Story of Worldwide Adventure and the Evolution of Extreme Skiing

"That was over 20 nautical miles in a small, open-cockpit dinghy—and he did it at 16 years old..."

It may seem odd to tease a book about extreme skiing legend Dan Egan with a quote about his brother's sailing abilities. But Egan, half of the U.S. Ski and Snowboard Hall of Fame duo the "Egan Brothers," has much to say about the role of family in his worldwide adventures. Those included more than 50 descents of mountains never skied previously.

30 Years in a White Haze begins with a near-death experience that Egan had in 1990, after 38 hours lost in a blizzard on Russia's Mount Elbrus. Leaving the mountain after that storm, which claimed the lives of 12 fellow climbers, was "the beginning of my adult life," he writes. He then details how the trauma affected every aspect of his existence thereafter.

Biographies of elite athletes often claim to be about more than sports. But Egan delivers on that promise with the same excitement and style he showed in his skiing.

A printing press like I could never dream of was whirring and banging down below...

A mystery is brewing for 13-year-old orphan Inka Pasternak. Publisher of the Avenue Argus, an independent street sheet made for and by the downtrodden folks of Old City, she takes notice when a popular street musician goes missing. With the tenacity of Nancy Drew and the cunning of Harriet M. Welsch, Inka investigates while still making deadline.

But Inka's world is not quite like our own. Old City is full of broughams, old-fashioned printing presses and vaudeville stages. And some of its Triple P denizens — panhandlers, performers and pickpockets — are modded out with cybernetic enhancements such as mechanical arms. In true steampunk fashion, The Inka Argus envisions a world that embodies both nostalgia and futurism.

Barre author Eugene Fairfield (real name Brian Wightman) creates a protagonist who's instantly endearing. Though the book is intended for young readers, Inka is charming enough to capture the attention of any mystery lover.

The spirited Morgans led the way with the Percherons pulling more than their share.

Jubilant "Jubal" Brown is a Vermont farm boy who's just trying to do right by his family and community. But farming is hard work, especially in the early 1940s. Through the detailed world-building of his historical novel, author John S. Hall shows that life on the titular farm is full of backbreaking labor and endless toil.

Jubal's mind races with thoughts of girls. He's happy with Polly, his main squeeze. But his undeniable chemistry with farm girl Maria occupies his thoughts as they work up a sweat with their chores.

Slowly, we get to know Jubal and the various people in his life. His uncle, Benny, has developmental disabilities but enormous strength. His father, Clyde, a former hooch runner and current alcoholic, listens to radio reports of the growing conflict in Europe with increasing paranoia. And his mother, Rose, does everything she can to keep her family afloat.

Harmony Hill brings well-drawn characters together in a coming-of-age story set in a fictional town that will ring true to Vermonters.