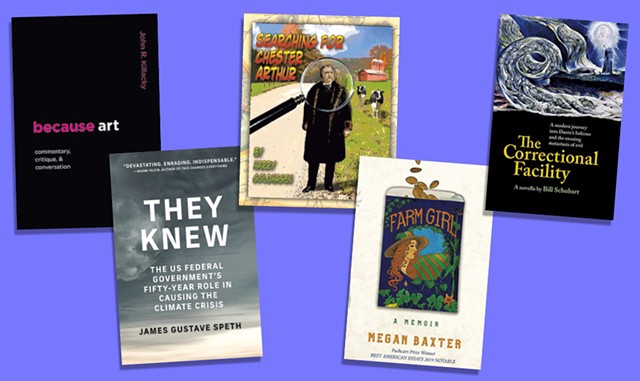 Seven Days writers can't possibly read, much less review, all the books that arrive in a steady stream by post, email and, in one memorable case, a colony of bats. So this monthly feature is our way of introducing you to a handful of books by Vermont authors. To do that, we contextualize each book just a little and quote a single representative sentence from, yes, page 32.

It was the biggest onion harvest the crew had seen, and we are all grinning...

A photo printed on the last page of Megan Baxter's memoir is captioned "The crew at Cedar Circle Farm [& Education Center], circa 2003." It's Baxter's favorite photo of herself, she writes — unposed on an old truck full of onions at the East Thetford farm at the end of a hefty harvest, with a huge smile and messy hair.

The Hanover, N.H., native's memoir recounts the year that began with her sixth summer working on the farm. Baxter juxtaposes the growth in the fields with the distance growing between her and her faraway fiancé, who'd fallen into addiction.

In this rich account of the rhythms of farming along the Vermont side of the Connecticut River — and a long, lonely winter in Portland, Ore. — the Pushcart Prize-winning essayist captures the pain of a tense reunion in an off-the-grid cabin and the hangover resulting from a tequila-fueled argument. Then she brings readers into a foggy cornfield at dawn, where "the world is reduced to rows of wet stalks."

Vermont boasts connections to many well-known historical figures. Fairfield author Harry Goldhagen wants his readers to know that U.S. president Chester A. Arthur, born in Fairfield in 1829, is one of them.

In his graphic novel Searching for Chester Arthur, Goldhagen traces the history and influence of our 21st commander in chief. Readers learn about Arthur's days as a lawyer, his rise to the vice presidency under president James Garfield and how he assumed the top office after Garfield's assassination in 1881.

In traditional comic-book panels, Goldhagen tells Arthur's tale with a colorful presentation of stylized documents and photographs, some historical and others original. He directs readers to Arthur-related historic sites and landmarks in and around Fairfield.

At one point, Goldhagen illustrates Arthur's obscurity relative to other presidents by depicting a day when he hit the streets of Burlington to see whether or not pedestrians could recognize Arthur from a giant cardboard cutout. Fewer than half could — but that was more, Goldhagen writes, than he expected.

In this collection of essays and interviews, Vermont state Rep. John R. Killacky (D-South Burlington), former executive director of the Flynn, writes about the confluence of art and politics — and the "empathic bliss" he experiences in the presence of his Shetland pony.

Like other writing in the book, the 2017 piece "The Gifts of a Pony Named Raindrop" is reprinted from a previous publication. Killacky reveals that he first fell for a pony named Raindrop as a youth in Illinois. These days, decades later in Vermont, he rides a pony of the same name from the seat of a two-wheeled cart. A former professional dancer who became disabled after spinal cord surgery, Killacky writes that Raindrop "allows me to dance and run again, reconnecting to my lost kinetic self."

The book's subjects of critique and conversation comprise a who's who of late 20th- and early 21st-century American art and culture, including composer John Cage, choreographer Bill T. Jones and cartoonist Alison Bechdel of Bolton.

Someone of nondescript sex steps from the far side of the ferry into view.

Is there something in Vermont's water that inspires local writers to try their hand at modern versions of Dante? South Burlington poet Seth Steinzor recently published the final installment of his verse take on the Divine Comedy. Now Hinesburg's Bill Schubart offers his Inferno in prose novella form.

Taglined "A modern journey into Dante's Inferno and the ensuing metastasis of evil," The Correctional Facility is narrated by a middle-aged scholar whose environmental research has "thoroughly discouraged me about our earthly prospects." Reeling from personal losses, he takes a "walkabout" in the Adirondacks, where he encounters his equivalent of Virgil — Walt Whitman.

The poet guides the narrator on a tour of the afterlife, which is no longer the Catholic hell but a vast "correctional facility" where dead souls prepare for rebirth by learning to comprehend the harm they did in life. With an urgent focus on nature and the climate crisis, Schubart finds clever illustrations of the endurance of evil in a secular world.

They Knew: The U.S. Federal Government's Fifty-Year Role in Causing the Climate Crisis

I summarized these conclusions in my Preface to the "Global Energy Futures and the Carbon Dioxide Problem" report.

James Gustave Speth, who chaired the Council on Environmental Quality during president Jimmy Carter's administration, lays out the case for the U.S. government's complicity in the current climate crisis in his new book.

In 2015, 21 youth plaintiffs sued the U.S. federal government, claiming that by advancing the climate catastrophe, it was depriving their generation of life, liberty and property without due process. Speth, who issued reports on the climate situation over the years for different administrations, goes full Bob Woodward and Carl Bernstein to investigate that claim, asking what the government knew and for how long.

The answers are predictably depressing. Despite testimonies from countless experts, often hired by the administrations themselves, each effort to combat the climate crisis has stalled. Yet Speth offers some hope as he witnesses the younger generations getting ready for a fight. Readers will be both enraged and motivated to action.