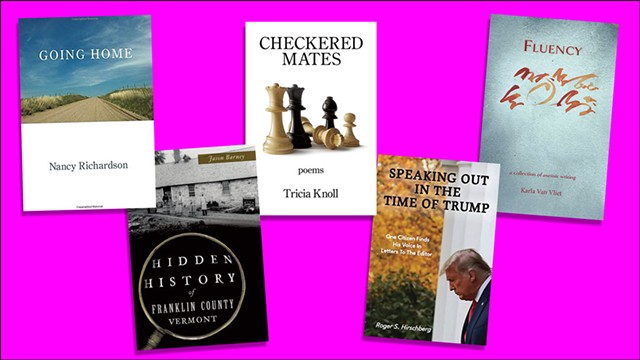 Seven Days writers can't possibly read, much less review, all the books that arrive in a steady stream by post, email and, in one memorable case, a grist of bees. So, this monthly feature is our way of introducing you to a handful of books by Vermont authors. To do that, we contextualize each book just a little and quote a single representative sentence from, yes, page 32.

Abenaki land was taken by American colonists in Swanton and by British Loyalists in Québec.

Jason Barney's short and easily readable volume covers a broad swath of Franklin County history. Starting with the retreating Laurentian Glacier in about 6,500 BC, it takes readers through Vermont's role in the American Revolution, the Civil War, the Great Depression and Prohibition — all the way to the arrival of the hippies and the communes they established in the 1970s. The book is peppered with interesting photos, including one of the construction of the original Missisquoi Bay Bridge between Swanton and Alburgh; there's also an illustration of the Atlas nuclear missile silos that were once scattered throughout the county.

A history teacher at Missisquoi Valley Union High School who was born and raised in Franklin County, Barney clearly loves local history and putting it into a national perspective. As he writes in the introduction, "I imagine it's a rare person who has enjoyed their job more than I have enjoyed mine."

Speaking Out in the Time of Trump: One Citizen Finds His Voice in Letters to the Editor

By his abusive use of Twitter ... Trump himself builds a case for an unhinged presidency...

If a positive arose from the polarizing Trump presidency, it might be that his conduct inspired previously apolitical types to engage in public forums. Granted, that could also be a negative, depending on your tolerance for social media. But mild-mannered Bondville dentist Roger S. Hirschberg chose a more genteel outlet than Twitter or Parler to express his exasperation with Trump: letters to newspaper editors.

Hirschberg's debut book, Speaking Out in the Time of Trump, consists of letters he sent to, and had published in, major U.S. newspapers, including the New York Times and the Washington Post, between 2017 and 2020. Each letter is accompanied by a short contextual commentary on the events that inspired it. Though the author's insights aren't especially revelatory, the compilation is a brisk and accessible chronology of a fraught period of American history.

Some artists believed Nietzsche // like I believe in postcards...

Friedrich Nietzsche wrote, "Out of life's school of war: what does not kill me makes me stronger." But what exactly does that mean? In "Simple Signs & Messages," excerpted here, poet Tricia Knoll addresses that question by pairing the abstract with the specific, philosophical with practical. A FEMA-trained emergency responder to Hurricane Katrina, Knoll chronicles hundreds of postcards she has sent to legislators to advocate for causes, including better health care, support for refugees and forest stewardship. Her ultimate request: "Make us stronger in love."

Throughout the 30 poems in Checkered Mates, her fifth published collection, Knoll combines the everyday and the unexpected to powerful ends. In one poem, directions for planting rose bushes echo lovers' limitations. In another, painter Salvador Dalí's drooping clock conveys an elder's disorientation. Knoll, now retired from a mostly non-literary career, has been composing poetry since she was 12, and it shows. Layers of meaning in each lyric or narrative poem invite readers to dive deeply into her world — and their own.

In Going Home, Nancy Richardson combines poems from her previous three collections with new work. The book is concerned first with the author's coming of age in the Rust Belt of Ohio, and later with her "pursuit of justice not always attained," according to the introduction. These prosy, narrative-based poems form a memoir of sorts, separated into seven sections. The third section, "Four Dead," serves as an anchor, describing the Kent State University shootings in 1970. The poet's working-class perspective and political awareness make for a refreshing read; instead of clichéd mythological allusions, Richardson invokes Philip Levine, Pablo Neruda, Studs Terkel and Langston Hughes.

"Door to Door" describes working for John Kerry's 2004 presidential campaign in language that hints at the failure and resignation to come. "Let these people / not be home // let the flyers / blow away quietly," Richardson writes. Her cynicism feels earned, after the earnest hope that begins the section: "We are here to save Democracy."

Fluency: A Collection of Asemic Writing

The river is that place in me, that sense of peaceful meditative attunement.

Artist and poet Karla Van Vliet's Fluency: A Collection of Asemic Writing is part essay, part art book. The focus of both halves is the asemic writing with which she adorns her watercolor-and-ink tableaux. Asemic writing has all of the aesthetics of traditional written language with none of the meaning. Essentially, it's beautifully crafted gibberish. Or, as Van Vliet writes, "asemic writing feels to me like ancient script ... [that] I cannot with my logical mind read."

Throughout, Van Vliet describes asemic writing as a natural and essential part of her artistic expression, one she uses to convey something ineffable about her relationship to the world. The markings look like inscriptions — or spells, as she refers to them. But they can impart only the meaning the viewer brings to them.

With poetic flair, the author describes her process with natural metaphors. Snaking rivers, snow-covered landscapes and that most mysterious of muses, the moon, are fodder for her inquisitive mind and skilled hands.