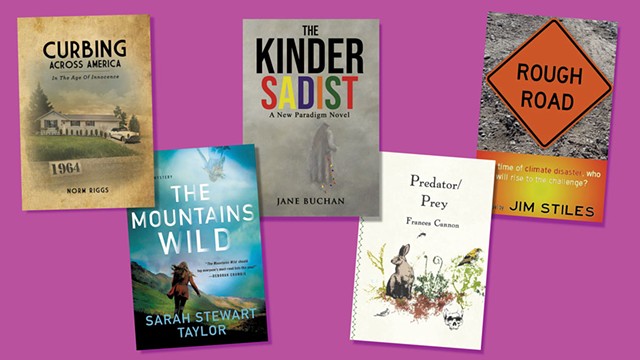 Seven Days writers can't possibly read, much less review, all the books that arrive in a steady stream by post, email and, in one memorable case, a maelstrom of salamanders. So this monthly feature is our way of introducing you to a handful of books by Vermont authors. To do that, we contextualize each book just a little and quote a single representative sentence from, yes, page 32.

"Hey, we've known for a long time that the world isn't safe for women."

Olivia and Bernadette have been "spirit-sisters" ever since the nuns paired them in the same hospital cot as newborns. When they were teenagers, Bernadette suffered a brutal attack that left both friends with lifelong trauma. Now middle-aged, the two women are living a peaceful life in Toronto, both in caring professions, when they learn of a murder with grotesque similarities to what happened to Bernadette. Olivia's cop boyfriend gets involved, and Bernadette starts seeing a stalker, suggesting that the perpetrators may still have her in their sights.

A former instructor at the Community College of Vermont, Jane Buchan has subtitled The Kinder Sadist "A New Paradigm Novel," which she defines as "reflect[ing] the values of community, partnerships, and the broad perspectives granted by multi-cultural, multi-racial perspectives." Indeed, the novel explores many viewpoints, including that of a killer. While the plot setup suggests a murder mystery to be solved by an intrepid detective, this is actually an inward-focused tale about how survivors of violence process, witness and heal.

I wanted to invite you in, but I know the taste / of these fierce, flash loves that turn bitter quick.

The slim literary collections known as chapbooks often fit in a back pocket. They enable writers, usually poets, to share a manageable, themed group of works that readers can absorb in pocket-size servings.

Vermont writer, artist and teacher Frances Cannon's latest chapbook is zigzag-stitched through its crinkly vellum jacket. Her illustrations grace the cover and final page. You will want to put Predator/Prey in your pocket to savor slowly. You may also do this because Cannon's poems are rich with discomfort.

Almost every page reveals a deeply personal example of how life renders us both predator and prey, sometimes simultaneously. The threats are diverse: men, both known and unknown; domineering lovers of any gender; self-doubt and aging; grudges that feed on us over time.

As a whole, the poems eloquently portray an accumulation of psychological bruises that every woman will recognize — and survive. One jarring exception, which revisits an actual headline-grabbing murder, feels out of place for its lack of firsthand perspective and its brutal ending. Cannon wields more power in her intimate depictions of vulnerability threaded through the quotidian.

Curbing Across America in the Age of Innocence

Our goal was to each collect 100 houses an evening, so we had to move briskly.

Now living in rural Vermont, Norm Riggs spent his younger years in Iowa. His often-funny memoir, published last fall, is set in the summer of 1964, when Riggs and college buddy Dave embarked on a cross-country trip with an unusual moneymaking mission. En route to the West Coast, the pair spent their days painting addresses on the curbs in front of suburban homes, returning later to solicit "donations" for their "community improvement" work. The project was largely successful, though not without mishap. Riggs acknowledges that being white, clean-cut frat boys helped the duo's cause.

The author places his story in the broader context of an America on the precipice of enormous political and social change. "1964 was a watershed year, a turning point from which the nation could never turn back," he observes in the preface. This framing elevates Riggs' "age of innocence" storytelling, as do his evocative descriptions, particularly of the natural world.

As we headed south and then west, the land opened and rolled, turning into the Ireland in my mind, green fields, little cottages tucked into the folds of the hills.

It's 2016, and Maggie has been informed of a new lead in the cold case of her missing cousin, Erin. Then it's 1993, Erin has just gone missing in Ireland, and Maggie travels from the United States to look for her — to no avail. Sarah Stewart Taylor's propulsive, atmospheric novel moves between the two time periods, while also providing flashbacks to the girls' childhoods that reveal Maggie's love for and frustration with her flighty cousin. The two were raised like sisters, but the differences in their characters are stark.

Modern-day Maggie, a Long Island cop, is determined to help the Irish police track down Erin and other missing women who may be connected to her. Stewart Taylor is a skilled storyteller who, having studied Irish literature in Dublin, is invested in capturing the country and its diaspora. The next novel to follow Maggie's adventures, a fresh mystery that again takes her to Ireland, will be published this summer.

Tom may be gaining on Elaine, but climate catastrophe is gaining on both of them — and it's not happening slowly.

The two are high school seniors at the start of Jim Stiles' debut novel. With other students in their Climate Change Adaptation class, Tom and Elaine travel north from Massachusetts for a school project, seeking a place likely to remain habitable as the Earth heats up. The students zero in on Amos, Québec, as the place for their research on building an REC (radically efficient community).

Later in the story, with school assignments behind them, Tom and Elaine settle south of the border in the Green Mountain State. Stiles, who lives in St. Albans, studied environmental science at Marlboro College and civil engineering in graduate school at Massachusetts Institute of Technology. "Thanks to people like Tom," he writes in the prologue, "Vermont has become one of the great success stories coming out of the Bad Times."