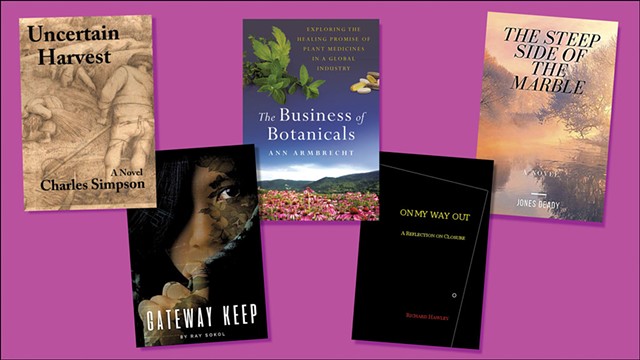 Seven Days writers can't possibly read, much less review, all the books that arrive in a steady stream by post, email and, in one memorable case, a richness of minks. So this monthly feature is our way of introducing you to a handful of books by Vermont authors. To do that, we contextualize each book just a little and quote a single representative sentence from, yes, page 32.

The Business of Botanicals: Exploring the Healing Promise of Plant Medicines in a Global Industry

In the 1970s, herbalist Rosemary Gladstar and Drake Sadler founded Traditional Medicinals, bagging and selling Gladstar's teas to fund a trip to Mexico. Today, you can get those teas at Walmart. Ann Armbrecht is a student of Gladstar's who coproduced the documentary Numen: The Healing Power of Plants with her husband, former Savoy Theater owner Terrence Youk. In The Business of Botanicals: Exploring the Healing Promise of Plant Medicines in a Global Industry, Armbrecht examines what happens when the traditional lore of healing plants becomes a multibillion-dollar business. As she puts it, "Can the life force of a plant find its way into products manufactured according to the requirements of capital?"

With her crowdfunded Sustainable Herbs Program, Armbrecht visited farmers and producers enmeshed in the global herbal supply chain, from the U.S. to Poland to India. She presents her findings in a lively, thought-provoking narrative, writing, "I discovered that claims of being natural were often far from true." Rather than being simply an exposé of the "business of botanicals," Armbrecht's book asks hard questions about how to keep that business closer to its roots.

The Steep Side of the Marble

Lily narrowed her gaze on her mother, whose posture had gone the way of a dying flower.

There is no sharper eye on a woman than that of her daughter, and The Steep Side of the Marble revels in the conflicts of that relationship — camaraderie one moment, ire the next. This debut novel centers on mother and daughter Dar and Lily, opening in the immediate aftermath of Dar's divorce from Lily's father. Lily is smart, sharp-tongued and growing up quickly; Dar is reckoning with her troubled familial relationships and her sexuality. The story fills out with other family members, mostly female, as Dar and Lily attend a family reunion on a tea plantation.

The book was born of Vermont author Jones Deady's own reckonings with his Southern homeland, its beauty and its insularity and intolerance. His writing is strong at a sentence level and downright thick in sensory detail as the novel winds toward daunting family secrets.

On My Way Out II: A Reflection on Closure

Last night's NBC news included a finding that American high school graduation rates have risen to eighty per cent — and this was presented as a positive finding.

Ripton author Richard Hawley is not going gently into that good night. Not yet, anyway. Born in 1945, the novelist and retired headmaster is chronicling his aging process in a series of diaristic memoirs of which this is the second, covering 2014 to 2017. That includes the rise of Donald Trump: "Are there really millions of American people in this 'base?'" Hawley asks incredulously in a 2016 entry.

It may be tempting to write off the author as an exemplar of the genteel liberalism of yesteryear, the equivalent of a Victorian gentleman contemplating modern trends from his settee. Hawley has a young daughter from an extramarital relationship — about which he speaks with refreshing candor — and we watch him navigate her world of water parks and Taylor Swift like a slightly bemused visitor from another land.

But Hawley is too broad-minded and subtle a thinker to be truly out of touch. Even as he acknowledges that he tends to "[assume] the continuity and rightness of liberal democratic life from my cozy outpost in Ripton, Vermont," he peers beyond his bubble, expressing his findings with an elegance that makes for good reading.

"You on the lookout for assassins or a raging husband?"

A sociology professor emeritus at the State University of New York-Plattsburgh, Charles Simpson is carving a new path as a novelist. But the underlying theme of Uncertain Harvest is in his wheelhouse. The Burlington-based writer and activist has worked on development and food insecurity issues; the not-implausible villain of his book is an agrochemical giant aggressively pushing genetically engineered seeds that grow for a single season, forcing farmers to buy new ones every year. This profit-motivated monster will mess with Mother Nature in other ways, too. Think pollinators. Think Earth's entire, interconnected food system.

Uncertain Harvest posits an almost dizzying matrix of science, politics and corporate hegemony, yet in the foreground are engaging individuals with relatable foibles. There are even romantic and sexy subplots.

Simpson's narrative, if a bit leisurely at times, steadily ramps up — fueled by murders, malfeasance and truly frightening technology.

Once the fighting started honor demanded that justice be served by one more act of revenge.

That E Ray Sokol is an eager student of science fiction is obvious from his debut novel, Gateway Keep. Throughout his dense mini-epic, the Colchester author drops references, subtle and otherwise, to the likes of Star Wars, Star Trek and Dune, liberally adapting quotes and concepts from such works to display his affinity to the pillars of the genre.

Gateway Keep is set long after aliens make first contact with Earth. Spoiler for sci-fi noobs: That rarely goes well. In the intervening centuries, the world has plunged into a feudal dark age; science is practiced like magic, and aliens exert shadowy control over humanity's fate. It's the sort of classically sprawling setup that George R.R. Martin or Philip Pullman could spend decades playing around in, to the delight (and torture) of their fans.

Sokol's grand ambition is admirable, and his genuine affection for his genre comes through in these 400-plus pages, despite inconsistent pacing and sometimes-confusing exposition. If his future attempts can harness that energy into a more focused approach to storytelling, his books might boldly go where ... well, you know.