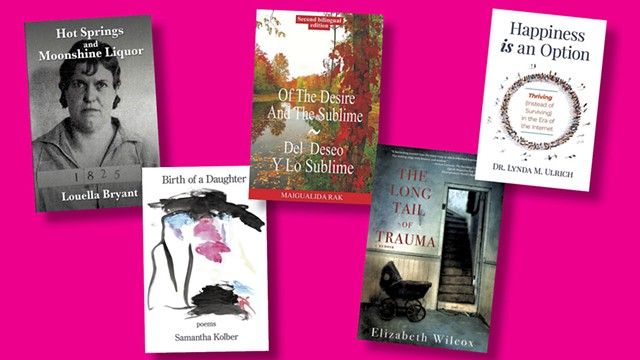 Seven Days writers can't possibly read, much less review, all the books that arrive in a steady stream by post, email and, in one memorable case, a creep of tortoises. So this monthly feature is our way of introducing you to a handful of books by Vermont authors. To do that, we contextualize each book just a little and quote a single representative sentence from, yes, page 32.

Hot Springs and Moonshine Liquor: A History of Illegal Whiskey in the Shenandoah Valley

They preferred to drink liquor because they knew the ingredients — they had made it themselves.

Lincoln writer Louella Bryant's memoir/cultural history, forthcoming in late December, abounds in small parcels of vividness. The smell of the air in early 20th-century Covington, Va., home to a prosperous paper mill and generations of Bryant's forebears, was so rank and inhospitable that "breathing was a conscious effort," she writes. "The air felt thick and sticky, as if a celestial chef were boiling up a vat of rotten cabbage just overhead."

The paper mill was the town's putative economic engine, but a shadow economy built on moonshine thrived just beneath the surface, and Bryant's family profited from it. At the height of Prohibition, her great-uncle Shorty, a bootlegger, once burst into her mother's childhood home, breathless from outrunning federal agents. Bryant's grandfather, a foreman at the paper mill, stuffed Shorty into the spare tire compartment of his Model A Ford and drove him 290 miles north to Harrisburg, Pa., to lie low. Bryant weaves her bizarro family lore into a portrait that is frequently as entertaining as it is illuminating.

Birth of a Daughter

in front of her, eschewing

Titles such as "False Labor at 26 Weeks," "Breastfeeding Dyad" and "My Toddler's Scrambled Eggs" reveal the overarching theme of Montpelier poet Samantha Kolber's debut chapbook, Birth of a Daughter: a mother's changing physical and metaphysical selves.

The sparse and clinical list poem "False Labor at 26 Weeks" evokes the tense vigilance of an expectant mother. The indentation and halting rhythm in "The Missing Poem: Birth" telegraph a disorienting birth experience. The refrain "I am marked" in the poem of the same name drives home the realization of undeniable — and unstoppable — transmutation.

Birth of a Daughter is not a collection of poems about Samantha Kolber's child. Rather, it's about Kolber herself experiencing and examining the various losses that go hand in hand with new life.

Of the Desire and the Sublime/Del Deseo y lo Sublime

You tenderly take my hands

And gaze at me placidly.

Venezuelan-born Vermonter Maigualida Rak is a Spanish tutor with a degree in English as a second language from Saint Michael's College. She is also a poet. Her latest book of poems, marked "second bilingual edition," suggests she is a hopeless romantic in both languages. Opposing pages of the book present a poem first in Spanish, then in English. Even to someone with minimal skill en español, it appears nothing is lost in translation.

Rak's verses give new meaning to "romance language"; her vocabulary is wistful and passionate by turns. Every single poem is about love. Phrases such as "feverish silence," "devastating loneliness," "infinite fulfillment" and "throbbing closeness" evoke both heaving-bosom bodice rippers and the forward sensuality of, say, John Keats. Rak has no use for irony or cynicism; she is wrapped in velvet and strolling a field of wildflowers.

Happiness Is an Option: Thriving (Instead of Surviving) in the Era of the Internet

Our many years of adventure had taught me that we can't be happy all the time, but in almost every situation, we can find something to be grateful for.

Lynda Ulrich had no journalism experience in 2014 when she launched her good-news-only, zero-advertising media outlet, Ever Widening Circles. But Ulrich's sunny disposition and strict avoidance of gloomy and depressing news don't reflect naïveté about the world. She and her husband, Chuck Verderber, both dentists, are seasoned international travelers who've seen their share of misery — and learned from it, Ulrich writes, that the world isn't as frightening, dangerous or depressing as the media often portray it.

Happiness Is an Option is a primer on how to achieve a more healthy and balanced worldview, one that celebrates human progress and goodness. In 2020, when it's too easy to bemoan the dearth of good news, this St. Albans dentist is filling that cavity with inspiration and hope.

The Long Tail of Trauma

Violet was an attractive girl, dark, with tidy ringlets and the deep set, forlorn eyes of her mother.

Fairlee writer Elizabeth Wilcox has had a journalism career that spanned the world. But one of the great enigmas of her life, she writes in this memoir, was right at home: her English-born mother, whose erratic, attention-seeking behavior often frustrated her.

In search of better understanding, Wilcox studied the psychology of trauma, which her mother experienced as a 3-year-old torn from her parents during World War II. From that research and her mother's oral history emerged this book; Wilcox uses techniques of memoir and historical fiction to tell parallel stories of her mother and grandmother. She reveals how early separations reverberate through generations, "unearthing a palimpsest of maternal history."

In her preface, Wilcox asks readers to keep in mind "all those families ... separated at national borders, detained in refugee camps, or who, unlike my own family, still endure prejudice and structural racism." It's a timely read in light of the revelation that hundreds of migrant parents and children separated at the U.S. border have yet to be reunited.