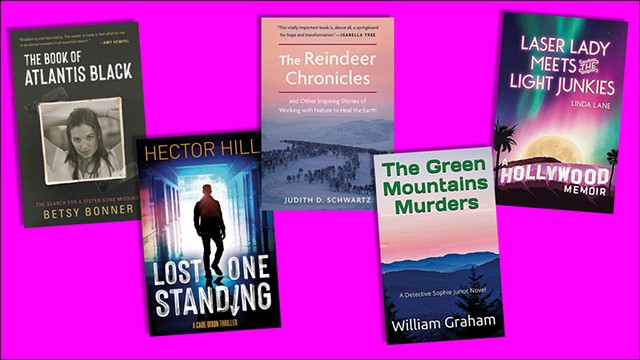 Seven Days writers can't possibly read, much less review, all the books that arrive in a steady stream by post, email and, in one memorable case, a zeal of zebras. So this monthly feature is our way of introducing you to a handful of books by Vermont authors. To do that, we contextualize each book just a little and quote a single representative sentence from, yes, page 32.

Inclusion here implies neither approval nor derision on our part, but simply: Here is a bunch of books, arranged alphabetically by authors' names, that Seven Days readers might like to know about.

The Book of Atlantis Black: The Search for a Sister Gone Missing

Her rules about stealing were clear in her mind.

The Book of Atlantis Black opens with a death: the author's sister's death, in a hotel room in Tijuana under mysterious circumstances. It sounds like something straight out of fiction, but instead it's the object of Betsy Bonner's intense focus in this memoir-biography hybrid.

Bonner depicts her sister, Nancy — who later changed her name to Atlantis Black — as a messy, creative, damaged person on a path to self-destruction. Bonner's attempts to understand her sister's complicated priorities and ethical codes — such as the one governing shoplifting, mentioned in the quote above — don't lead to clear answers. If anything, the story of Atlantis gets more mysterious as it proceeds. But Bonner, a poet who lives in southwestern Vermont, is the right writer to lead us down the dark and twisty path.

Vermont has no lack of fictional sleuths or of readers eager for them. Stowe author William Graham enters the fray with his mystery series focused on detective Sophie Junot, who struggles with depression as she works to unravel webs of small-town intrigue.

This novel, the first of four, offers not a single book-length whodunit but a series of distinct murder cases, with victims ranging from an antiquarian bookseller to the fictional governor of Vermont. Among the colorful players are a Thomas Pynchon-esque reclusive author, a spying housekeeper, a scheming tennis pro, secretive nuns, and rural journalists with and without ambition. Uniting them all is Junot, a tough cop dealing with dark thoughts and ambivalence about the baby that she and her wife are expecting.

It's tough to imagine any Vermont detective handling this much mayhem, but fans of short-form mysteries will appreciate the story's lightning pace.

Maybe his therapist was right: focusing on the positives in life really can make all the difference.

Imagine you find yourself in a position to save the lives of those who marginalized you by risking your own safety. What would you do? This is the scenario facing Cade Dixon, the teenage protagonist of Highgate author Hector Hill's YA thriller Lost One Standing.

Originally conceived as a screenplay, the fast-paced novel centers on the book-smart, blue-collar New England prep school student, whose brains, MMA skills and intimate knowledge of campus infrastructure come in handy when his wealthy classmates are held hostage by a group of armed (and delightfully snarky) men.

Misfit hero Cade is likable for his advocacy of the little guy; less so for his invasive ritual of staring at his crush from the attic above her classroom. Hill could benefit from a bit of copyediting (he mentions Cade's age — 17 — four times in the book's first dozen pages), but teen and adult adventure fans are likely to enjoy the ride.

In February 1972, Linda Lane was a clown with prospects. She had just agreed to be the harlequin-in-residence at a Los Angeles nightclub when someone gave her a 6-inch-long cylinder and showed her how, at just the right angle, she could make a tiny holographic cannon float in its center. The nightclub lasted barely two months, but Lane's infatuation with holography became the animating drama of her life.

She developed a screenplay, Revelation II ("I asked myself, what would be the most astonishing vision imaginable? The answer was simple: the Second Coming of Christ"), and spent the next few decades gallivanting around Hollywood, New York and San Francisco in search of someone to produce it. The Burlington resident's long, weird memoir, which mostly goes down like a bowl of Froot Loops, involves, in various proportions, Salvador Dalí, Mylar, disappointment, astrology, Richard Harris, the Chateau Marmont and a curious flea named Gerald that becomes trapped in human earwax.

In true Vermont fashion we shared a potluck meal and sat around a circle in a yurt.

When's the last time you heard good news about the state of the Earth? Southern Vermont journalist Judith D. Schwartz, the author of two previous titles about water scarcity and soil restoration from Chelsea Green, fully acknowledges the severity of the climate crisis in The Reindeer Chronicles. But she wants to give readers something more upbeat to think about than impending doom.

The book presents a series of absorbing case studies of grassroots efforts to "heal the Earth." We learn how people are revivifying plains in China and deserts in Saudi Arabia; how they're herding reindeer in Norway and cattle in Washington. (One common thread is a new, holistic approach to grazing animals.) Throughout, Schwartz stresses the value of listening, consensus building and acting from hope, not fear. While those principles may seem like distant pipe dreams in the current political climate, they're dreams worth keeping. "Earth repair," Schwartz writes, "...is the inverse of apathy and an antidote to despair ... We can all find a garden to tend."