Page 32: Seven Books to Watch Out For 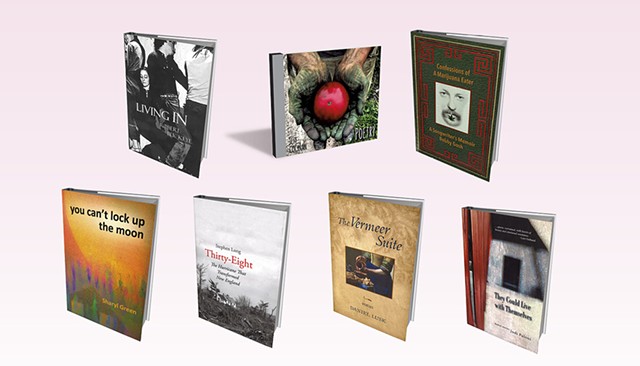 Seven Days' writers can't possibly read, much less review, all the books that arrive in a steady stream by post, email and, in one memorable case, a colony of trained ants. So this monthly feature, "Page 32," is our way of introducing you to seven books by Vermont authors. To do that, we'll contextualize each book just a little and quote a single representative sentence from, yes, page 32.

"Tuesday night, it's hot and muggy, Detroit is burning, and no one in the project works anyway, so some guys decide to hit the N&T Grocery, but Cosbey's made it out, he doesn't need it."

Middlebury author Robert Buckeye is a tricky one to pin down, and that literary slipperiness is on full display in Living In. The book is a compendium of essays, criticism, fiction, metafiction ... and other literary forms yet unnamed. Living In is shot through with the spirit of progressivism and artistic risk taking; though many of the short selections concern film, Eastern Europe or both, Buckeye hasn't met a subject he's reluctant to address. That means the book isn't for everyone, but those who dig it will likely really dig it.

Here's something you don't see — or hear — every day: a handsomely printed, self-published, double-disc set of spoken-word poetry. The excerpt above comes not from page 32 but from track 32 of this unusual collection of more than 80 poems, read by the author himself. In that poem, "Fire Works," Plattsburgh resident Cochran draws parallels between colorful Fourth of July explosions and the silently spectacular blooming of a patch of lilies. Cochran certainly makes the most of his opportunity to read, rather than to type, his poetry, investing his delivery with a panache that would delight any drama coach.

Confessions of a Marijuana Eater: A Songwriter's Memoir

"The lead trumpet player was so wasted that he found a scooter somewhere and rode it straight through a large plate glass window, cutting his arms."

Confessions offers many tales from the road, as you'd expect from this author: a lifelong piano player, singer and songwriter. Now 80, Brookfield-based Bobby Gosh has performed with countless jazz and pop stars, and penned hundreds of songs for film, radio, TV and other musicians — including one that hit gold. But the memoir also marks Gosh's bold coming out as a longtime marijuana user. While he doesn't dismiss the realities of drug abuse, he stresses the plant's connections to creativity and health. In straightforward prose, Gosh shares his fascinating life and fervent conclusions.

You Can't Lock Up the Moon

"Jamaria had been through the metal detector at the prison twice before."

In this passage, young Jamaria, the protagonist of the middle-grade novel You Can't Lock Up the Moon, enters the prison where her mother is incarcerated. First-time novelist Green writes not just to share a story but to connect with and empower a population that's surely larger than we realize: children of incarcerated parents. Young readers are invited to join Jamaria as she attempts to figure out the meaning of her conflicting emotions.

"What [hurricanes] do during their lifetimes — whether they kill people, destroy bridges, and flatten forests or spend their days simply churning up the ocean that feeds them — depends partly on chance but mostly on the weather systems around them."

Nearly 80 years ago, the "storm of the century" plowed through the Northeast, killing hundreds and demolishing forests and property throughout northern New England. Long's marvelously researched book investigates not just the hurricane but its complex fallout. A Corinth resident and forestry expert, the author digs into the ecological, economic and personal impacts of what is still the biggest storm ever to hit the region.

Long will present and read from the book on Thursday, April 28, 5 p.m., at the Vermont Folklife Center in Middlebury; and on Tuesday, May 24, 7 p.m., at Bear Pond Books in Montpelier.

Prolific local poet Lusk has found painterly inspiration for his latest book. The 18 poems that constitute The Vermeer Suite were inspired by the paintings of 17th-century Dutch master Johannes Vermeer; full-color reproductions of them accompany the poems. Relatively little is known about Vermeer's life, so Lusk uses the poet's art to complement that of the painter and the biographer, crafting emotional and narrative responses to some of the world's most renowned paintings. The line quoted here is from "Girl," a poem about, as it happens, Vermeer's best-known work, "Girl With a Pearl Earring."

They Could Live With Themselves

The 12 linked stories in the author's second collection are all set in the small fictional town of Stark Run, Vt. In Paloni's literary world (as in the real Vermont), residents of all stripes often find themselves interacting in unexpected ways. Those interactions form the book's narrative spine. As the excerpted sentence illustrates, Paloni demonstrates a gift for capturing the unique voices of her diverse characters.