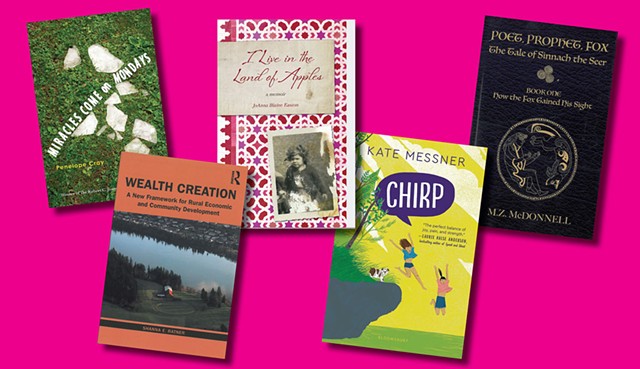 Seven Days writers can't possibly read, much less review, all the books that arrive in a steady stream by post, email and, in one memorable case, a passel of opossums. So this monthly feature is our way of introducing you to a handful of books by Vermont authors. To do that, we contextualize each book just a little and quote a single representative sentence from, yes, page 32.

Today the artist wants to paint in blue. But he is the red painter. The artist paints in red.

This debut collection from Shelburne writer Penelope Cray defies categorization. Walking the line between poetry and short story, Cray explores a variety of topics and forms, together with her wide-ranging cast of mysterious characters.

Our page 32 quote comes from a meditation on creativity and an artist's identity. Meteorites and personified balloons make multiple appearances in these pages. The Easter bunny is killed off. Body parts become objects of love and ire. Unafraid of the bizarre, Cray will surprise you, unsettle you and even make you squirm with each turn of the page.

While every line here reads as deliberate, the intended message is far from obvious. It's an adventure to follow Cray's lantern through the landscape of her imagination without worrying too much about what it all means.

Cray has been published in journals including Middlebury College's New England Review; readers can watch a video of her reading from Miracles Come on Mondays at greenmountainsreview.com.

I Live in the Land of Apples

I gave up on my mother early, he [Easton's twin brother] beat his head against her stony heart.

Charlotte writer JoAnna Blaine Easton named her memoir for her father's ancestral village: Mazraat el Toufah ("apple orchard") in the mountains of Lebanon. "I am his child," she writes of her second-generation-immigrant father, praising his "amber-eyed vision that cradled me." The seventh child born to this father and an Irish Catholic mother, Easton remembers her mother less fondly, as the woman who essentially abandoned her and her twin brother to nuns for their first three weeks of life.

The experience of "feeling unmothered" helped launch Easton on a "life as a seeker," she writes. Her seeking has included studies of yoga and Jungian philosophy; travels in Europe, where Easton met Frau Engels, the spiritual mother or "motherangel" who fostered her artistic instincts; and long-time involvement in the arts. Rather than narrate her life chronologically, Easton takes a circling, lyrical approach, following intuitive associations and interspersing her remembrances with her own poems and quotes from the thinkers she admires. It's the portrait of a woman whose seeking has borne fruit.

Poet, Prophet, Fox: The Tale of Sinnach the Seer: Book One: How the Fox Gained His Sight

"The Faeries are punishing us for some secret crime known only to their vicious kind."

Achieving greatness rarely comes without struggle. Just look at the story of Sinnach the Seer.

Described as a "queer mytho-history of ancient Ireland," M.Z. McDonnell's 2019 novel concerns a persecuted child who is seen by the world as the girl Muirenn but whose true self is a boy named Áedán. He fulfills his destiny as the powerful Druid prophet Sinnach, facing challenges in the human and faerie worlds along the way.

As McDonnell, an ecologist and herbalist, explains in their author's note, the novel is an amalgamation of facts rooted in scholarly research and products of the author's imagination. "I wove together my understandings of Irish mythology, archaeology, folklore, linguistics, druidism and early medieval Irish history to create a more nuanced and layered story," they write.

Not familiar with Old Irish names and terms? The book includes a glossary and pronunciation guide for smoother reading.

Poet, Prophet, Fox is an engaging and entertaining story that demonstrates the strength of a person's true nature when they refuse to be bound to an assigned identity.

Mia thought about what Daniel had said about the farm needing to grow to survive.

Plattsburgh, N.Y., author Kate Messner — yup, she's married to WPTZ meteorologist Tom Messner — has developed a reputation for tackling subjects that books for middle-grade kids typically avoid. In The Seventh Wish (2016), she wrote about heroin addiction. Her latest novel, Chirp, addresses sexual abuse, grooming and the #MeToo movement. If that sounds grim or disturbing, fear not: Messner has wrapped a sensitive, non-graphic treatment of those topics in a fun, upbeat story that tweens are bound to eat up.

Twelve-year-old Mia, newly returned to Burlington from the big city, is eager to help her beloved grandma's cricket farm thrive. A retired entomologist, Grandma hopes to sell crickets to the public as a "superfood." (In her acknowledgments, Messner thanks Middlesex's now-closed Flourish Farm, which had a similar mission.) But is someone trying to sabotage the cricket queen? To save the farm, Mia draws on new friends, local maker spaces and the power of a female entrepreneur network. Along the way, she gains the confidence to face a dark secret from her past. Grandma's business may be buggy, but Messner's message about trusting your instincts and speaking up is rock solid.

Each business or partner must benefit from the value chain or they will not continue to participate.

The former Mel King Community Fellow at the Massachusetts Institute of Technology argues for the consideration of community assets such as social, natural, political and intellectual capital as part of a reinvention of capitalism that leaves no one behind.

Released by academic publisher Routledge in November 2019, Wealth Creation isn't exactly a breezy beach read. The font is tiny and tight, and the lay reader may want to keep a highlighter handy to note novel concepts. Chapters delve into questions such as "What is a wealth creation value chain?" and "How do ownership and control change the game?"

As Ratner writes in the preface, "If you are looking for a framework that will help you articulate and actualize your drive to reshape our world toward a more sustainable future, you have come to the right place."