by Margot Harrison and Pamela Polston 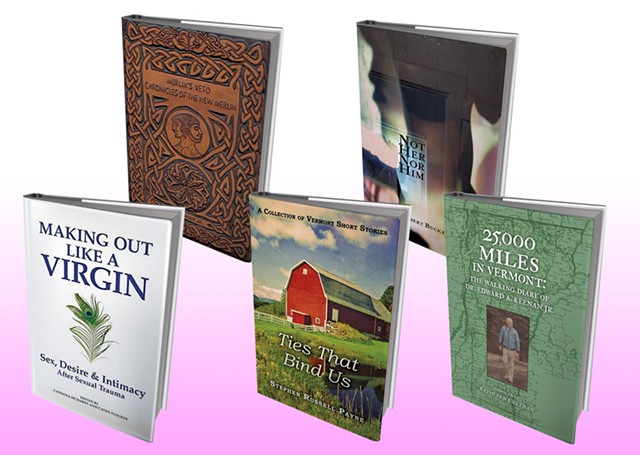 Seven Days' writers can't possibly read, much less review, the number of books that arrive in a steady stream by post, email and, in one memorable case, a herd of testy wildebeests. So this monthly feature, "Page 32," is our way of introducing you to five books by Vermont authors. To do that, we'll contextualize each book just a little, and quote a single representative sentence from, yes, page 32.

Not Her Nor Him

"She says, no, as though she has lost something, says no, as if she needs to hear it again, convince herself that she means it, but as much as his fingers seek her out, her body answers back."

The prolific Robert Buckeye, who splits his time between Middlebury and Bratislava, had a collection of essays and fragments in our April installment of "Page 32." He returns with this volume of three novellas — each exploring the winding byways of male-female relationships, each resolutely experimental in its prose. Each novella has a vividly imagined setting, too: One takes place in Vermont; another spirals out from a jazz performance in a Montréal hotel bar. The title work brings readers all the way to 1931 Berlin, where a young Jewish woman's interactions with her psychoanalyst are layered with unsettling Oedipal implications. In hypnotic, deliberately repetitive prose, Buckeye evokes not just personal neuroses, but a diseased society on a downward slide toward fascism. "To live is to be complicit," the heroine reflects.

"The general practitioner, who beat his projected time by two and a half hours, said future walks will be limited to 50 miles. After that distance, he said, it becomes work."

Just before his 80th birthday, on November 7, 1999, Edward A. Keenan Jr. completed an extraordinary goal: to walk every road in Vermont (except interstate highways). His daughter, Kathy Keenan, chose to commemorate his remarkable hobby in a book. 25,000 Miles compiles her father's diary entries, newspaper articles about his walks, presentations he made to various groups and other documentation. Burlington-born Edwards earned his undergraduate and medical degrees at the University of Vermont. In 1951, he moved with his wife, Ione, to Essex Junction, where he remained for 67 years. Keenan adopted the practice of long-distance walking during his medical career, but pursued it in earnest after his 1987 retirement. His diaries make note of the towns, weather conditions and points of interest — including wildlife — along the way. Many of these observations are (literally) pedestrian, but the book is peppered with articles that flesh out the life of a Vermonter uniquely devoted to his state. Keenan died in 2011.

Making Out Like a Virgin: Sex, Desire & Intimacy After Sexual Trauma

This wellness-oriented essay anthology has multiple Vermont connections. Co-editor Catriona McHardy teaches at the Community College of Vermont and spent years as Planned Parenthood of Northern New England's vice president for education and training. Two contributors are Burlington-based: psychotherapist Kevin Gallagher and Sarah Mell, a familiar face in the city's theater community. (Our page 32 quote comes from Dubai author Lynnette E. Harper's essay "Breathing Compassion.") Grim as the anthology's subject is, these essays prove surprisingly rich in joyful sexual frankness and humor. They live up to their billing as "stories in which people have started to own their bodies, to resuscitate and reclaim their lives," as Vermont College of Fine Arts faculty member Sue William Silverman writes in the foreword.

"She gasped in disgust at the sensation of his energy mixing with hers, and suddenly felt ill."

A. Pauly Jr.'s bio describes him as "a modern day shaman who draws universal wisdom teachings from all world traditions." In 2010, an afterword to this book tells us, he had a dream in which "a fully formulated novel and its title play[ed] out before me like a movie." That dream became Merlin's Veto, the tale of a young girl whose own dreams prove prophetic. While she explores her place in a lineage of benign, nature-based magic stretching back to the wizard Merlin of ancient Breton lore, her brother takes a darker path. The Cabot author's novel comes with a blurb from Lynn Andrews (Medicine Woman), one of Pauly's mentors, who describes it as "empowering."

Ties That Bind Us: A Collection of Vermont Short Stories

"We were in love but just as she couldn't leave her home in New York, I couldn't abandon Joe in Vermont."

Stephen Russell Payne is a fourth-generation Vermonter from St. Johnsbury whose day job is surgeon and clinical assistant professor at the University of Vermont College of Medicine. But he's also been a writer, he claims, since Vermont poet Galway Kinnell visited his seventh-grade English class. In addition to fiction, nonfiction and poetry in various publications, he has one novel, Cliff Walking, and a bio of Burlington western-swing legend Rick Norcross under his belt. Payne's latest is a slim volume of 10 short stories. In them, like his mentor Howard Frank Mosher, Payne unspools vivid tales from the Northeast Kingdom with the authority of residence. Fiercely independent rural characters are so frequently considered "a dying breed" as to seem cliché, but in this aptly titled collection Payne draws relatable human portraits with affection, respect and depth.

The original print version of this article was headlined "Page 32: Short Stops in Five Volumes"

Arts News Not Her Nor Him Robert Buckeye Spuyten Duyvil 25 000 Miles in Vermont: The Walking Diary of Dr. Edward A. Keenan Jr. Kathleen J. Keenan Making Out Like a Virgin: Sex Desire & Intimacy After Sexual Trauma Catriona McHardy Cathy Plourde Merlin's Veto: Chronicles of the New Merlin A. Pauly Jr. Ties That Bind Us: A Collection of Vermont Short Stories Stephen Russell Payne