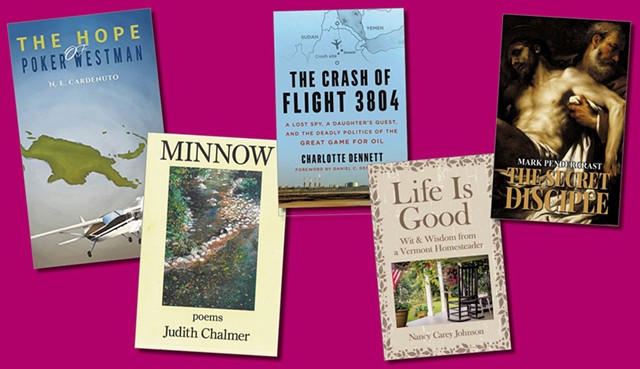 Seven Days writers can't possibly read, much less review, all the books that arrive in a steady stream by post, email and, in one memorable case, a maelstrom of salamanders. So this monthly feature is our way of introducing you to a handful of books by Vermont authors. To do that, we contextualize each book just a little and quote a single representative sentence from, yes, page 32.

The Hope of Poker Westman

Family was always my biggest problem, and here I was, walking into the arms of one that wasn't even related to me.

Twelve-year-old Timothy "Poker" Westman got his nickname from the game his pilot father was playing when he was born. But a hard-to-reach dad is the least of his problems. After Poker's mom dies, father and son relocate to the Indonesian island of Papua (here called by its former official name, Irian Jaya), where Dad has a new job as a transport pilot. The all-American kid learns to deal with rats, lizards and malaria while finding a new home in the close-knit expatriate community.

Vermonter N.E. Cardenuto's bio mentions past residence in Irian Jaya, and it shows. After an awkward start, the story hits its stride as Poker discovers his new world. The fast-paced, kid-friendly novel introduces young readers not just to an idyllic island setting but to Papua's legacy from World War II and colonial times. As Poker wonders why expats and indigenous people have such different standards of living, so will the reader, and Cardenuto offers no pat answers.

The birds hang, round as apples, no more than an arm's distance up.

In 2017, Judith Chalmer told Seven Days she planned to complete her second poetry collection following her retirement that year as executive director of arts and disability nonprofit VSA Vermont (now called Inclusive Arts Vermont). Chalmer checked that task off her list in February when she released Minnow, her follow-up to 1995's Out of History's Junk Jar: Poems of a Mixed Inheritance.

Divided into sections with austere titles such as "Mirror," "Practice" and "Sense," Minnow contains 39 poems illuminating topics such as deep love, Judaism and mindfulness.

The poet's appreciation for the natural world is evident on nearly every page. "Autumn," for example, evokes a nature lover's version of Skeeter Davis' ballad "The End of the World," with loons feeding, fog breaking and lichen curling, their activity unaffected by the narrator's longing. Fans of the late Mary Oliver may find a local favorite in this Green Mountain State scribe.

The Crash of Flight 3804: A Lost Spy, a Daughter's Quest and the Deadly Politics of the Great Game for Oil

As the daughter of a diplomat, I couldn't help but feel sympathy for them, especially with my personal knowledge of what had transpired under the shah.

How many people can say their dad was basically a real-life Jack Ryan? If Charlotte Dennett had simply chronicled the postwar counterintelligence work of her father, a now-famous American diplomat and spy, it would have been an absorbing read. But what makes the Cambridge lawyer and investigative journalist's latest book so compelling is how much deeper and broader she digs than personal memoir.

In The Crash of Flight 3804: A Lost Spy, A Daughter's Quest and the Deadly Politics of the Great Game for Oil, Dennett attempts to unravel and reconcile with the 1947 death of her father, Daniel Dennett, in a mysterious plane crash. He had been assigned to the Middle East to study the proposed route of the Trans-Arabian Pipeline. Through meticulous research and reportage — including observations from her own days as a reporter in the region — Dennett uses the crash to examine the brutal and byzantine politics of oil in the Middle East. Equal parts Thomas L. Friedman and Tom Clancy, the book is a remarkable achievement whose personalized insights on geopolitics are both gripping and sobering.

Life Is Good: Wit & Wisdom From a Vermont Homesteader

I found myself wondering if human ashes looked anything like what I had concocted, and I began praying Dad didn't look at them.

If this quote from Nancy Carey Johnson's 2019 essay collection sounds sketchy, it's all in good fun. Six years after her mother died, Johnson, a Brooklynite turned Vermonter, finally claimed her ashes from the funeral home on behalf of her father, who couldn't bring himself to do so. Johnson promptly stowed the cremains in a safe spot, only to forget where that was.

The Poultney-based author, songwriter and hemp farmer describes herself in the introduction as "an accidental writer." Her book evolved from a response to a Facebook friend who, disgusted by her news feed of regurgitated memes and hateful political posts, asked friends simply to post about their days. Johnson obliged — and her friends gushed over her prose. She turned her daily reflections into short essays, which she calls a cross between the work of Erma Bombeck and Chicken Soup for the Soul. Light and pithy, Life Is Good is warm, comforting and easily digestible, like the aforementioned broth.

Jesus leaned forward and took her hand. "I do not know exactly," he said simply. "But you must have faith."

The latest work by Colchester-based Mark Pendergrast is a slim volume of what can only be described as Bible fan fiction. Pendergrast has written 10 nonfiction books on topics ranging from Coca-Cola to repressed memory, so it makes sense that his first foray into adult fiction is based on years of research. Told from the point of view of Mary Magdalene and the disciples Simon and James, the story makes the case that the resurrected "Jesus" who emerged from the tomb was not actually Jesus but Jeremiah, a secretive and devoted follower of Christ.

Pendergrast depicts Jesus as a thoughtful, burdened man who is determined to earn the devotion of his followers. "Sometimes my spirits are as empty and as dry as the winds from the deserts," he tells Mary Magdalene. "At such moments I cannot give more." His followers, too, gain personal characteristics here that texts like the Bible don't allow for.

For those who believe the Bible to be the word of God, the book will undoubtedly be offensive. But those who are interested in the history of Christianity without being particularly attached to its sanctity may find it an engaging read.