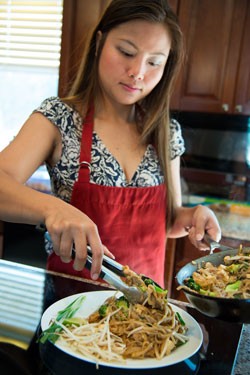 Spicing things up has been a recurring theme in Kae and Bill Alexander’s relationship. The couple met three years ago in Thailand, when Vermonter Bill was in Bangkok as a freelance web designer. Kae prepared him basil-flavored pad krapow at her Chon Buri restaurant, one of three seafood eateries she owned in the Bangkok region.

“I make it with same heat as for a Thai person,” Kae Alexander remembers. Despite Bill’s reddening face, “He not tell me about so hot. Then I said, ‘Next time you come to eat, I promise to make not so hot for you.’” Bill became a regular over his three-month tenure in the city, and a romance was born despite the pair’s mutual language limitations.

Soon Vermonters may start a love affair of their own with Kae Alexander’s spicy cooking. She opened her take-out eatery, Thai Catering of Vermont, at the couple’s Shelburne home on July 28. Disappointed with the less-than-authentic Thai food she’d tried in the United States, Alexander was determined to introduce Vermonters to the real thing. Now they can order from Thai Catering of Vermont’s moderately sized menu and pick up weekday lunch or dinner.

Her life as an at-home caterer is a far cry from the one that Kae, née Pangthanamaneerat, was living when she served her future husband that first krapow. The accomplished 30-year-old also has a degree in interior design and owned a real estate firm in Thailand.

When Bill Alexander returned to Shelburne, he and Kae stayed in touch while he did a web redesign for her company. What Bill didn’t know was that the woman he was communicating with wasn’t Kae; it was her English-speaking older sister. “When we meet together, I say ‘Yes, yes, yes.’ Everything yes! He think I can speak English, but no,” admits Kae Alexander, who has been studying the language at home since she arrived in the States.

On a return visit, Bill Alexander learned of his lady love’s de facto Cyrano. From then on, to guarantee he was talking to the right woman, the pair communicated via Skype, with Kae Alexander using Google Translater and a Thai-to-English dictionary.

She conducted her interview with Seven Days in a similarly tech-assisted manner, occasionally typing a Thai word into her tablet before sharing the English translation.

A successful businesswoman who owned four homes, Kae Alexander was in no hurry to relocate to the U.S. from Thailand. But she was ready to start a family with the man she’d grown to love long-distance.

She gave Bill an ultimatum: She would consider moving to Vermont if he would first spend some time living in Thailand. They purchased a Spanish-style home together on the coast in Samut Prakan, where she owned another restaurant. Kae Alexander still keeps a photo of the home in a frame labeled “Dreams.” Bill agreed to stay there for six months while Kae continued to work late nights, running her businesses and cooking. They visited temples and, as Kae describes it, “We build everything new. We live together, and we love so much. I tell him I need a strong family: heart for heart, not papers for papers.”

After just three months in the house together, she was ready to join Bill in Vermont. They wed on December 29, 2011, and relocated to a rental cottage in Castleton, where Bill had a consulting job.

Almost immediately, the new bride was eager to start cooking again, frustrated by the required wait for a work permit and Social Security number. She started Thai Catering of Vermont in February with a clear goal: to expose her new neighbors to authentic Thai food without pandering to the American palate. “They very good people; like a lot,” Alexander says of her original customer base in Castleton. “They know Thai food more. They closer to New York.”

Now, back in the couple’s permanent home in Shelburne, Kae Alexander is learning about the personality of Chittenden County diners. She usually cooks only Monday through Friday, while her husband works in southern Vermont, but her opening day was an exception. On the Saturday of the Shelburne Museum Art and Craft Festival, Alexander set up a small tent on her front lawn, right across the street from the museum. She cooked a limited menu in a wok on a hot plate. By late afternoon, a crowd had gathered to watch Alexander prepare her fried pad Thai.

Alexander’s regular menu boasts more authentic takes on dishes familiar to Vermonters — such as that pad Thai — along with dishes rarely seen beyond the Gulf of Thailand. A number of those are Thai comfort foods more often cooked in homes than in restaurants. Pad nor mai woon sen, which Alexander pronounces as “pad nomee,” is chief among them.

The sugary, soy-based stir-fry is the Thai equivalent of a meatloaf used to hide vegetables. Alexander says her own mother cooked it to trick her into eating garlic and other vegetables she didn’t like when she was a young child. At her restaurants in Thailand, she pulled the same maneuver on young customers. “Kids come and say, ‘Ooh, very nice,’” she says, widening her eyes. It remains to be seen if the bamboo dish will play as well with American youngsters, but adults are sure to enjoy the tender shoots, sweet, roasted whole garlic cloves and chunks of scrambled egg, all mixed with carrots, mushrooms, scallions and cherry tomatoes.

Kai jeow omelettes are often served as a side dish in American Thai restaurants. At Thai Catering of Vermont, they’re a main attraction. Alexander starts by taking a fist-size portion of lean pork from her big black refrigerator. On her marble countertop, she places the meat on a small cutting board and begins to chop frenetically. Once it looks coarsely ground, she buries a single carrot stick in the pile and chops until the pork is mixed with tiny flecks of orange. She breaks two eggs in a bowl and whips them with a squeeze of fresh lime, chopped onions and scallions until they’re foamy. Then she adds the pork mixture, soy sauce, Squid brand fish sauce and powdered chicken stock. She heats oil in her wok until it steams and quickly throws in the egg mixture, shaking it and making it dance across the pan.

Once it’s finished cooking, Alexander tosses the omelette on a pile of freshly steamed rice. The crisp outside opens up to an airy, soufflé-like interior. The rich, slightly oily dish bursts with the meaty chunks of pork and sweet, slightly charred onion. One is barely enough.

Next, Alexander prepares another dish often seen as a side or starter — som tam. The name of this green papaya salad translates into English as “sour pounded.” That’s because it’s made in an old-fashioned stone mortar and forced full of flavor with a matching pestle. Alexander starts by grinding a few cloves of garlic in the deep bowl. Bit by bit, she adds vegetable after vegetable, pounding fresh lime, bird’s-eye chiles, fish sauce and palm sugar into the mix. Completed, her version of the dish is uncommonly appealing to the eye, with a white base of papaya matchsticks dotted with bright-red cherry tomatoes and marbled green balls that turn out to be Thai eggplants.

Though som tam is often used as a cooling side in American Thai restaurants, it’s really intended as a dish of its own. Alexander says she prepared the dish with a milder dose of heat than she would for a Thai person. Served with a quartered hard-boiled egg and a few slices of cucumber, it leaves a pleasantly prickly fire on my lips for almost an hour after I’ve finished it; the spice is perfect, and the flavors aren’t overbearing.

Alexander says that next time I try the som tam, she’ll serve it the way she did at her restaurants in Thailand — with fried chicken, eggs and pork, a presentation all her own. She’s excited to introduce Vermonters to different regional types of Thai cuisine, including northern-style delicacies from the Chiang Mai area. Alexander cooks four regional variations of tom yum soup, the Thai restaurant staple. Her rich, bright-red Bangkok version strikes a beautiful balance of sour and spicy with a little help from fat chunks of fresh galangal, a more complex relative of ginger.

For now, most of Alexander’s customers are locals who happen to pass her home and see the makeshift sign advertising Thai food. But she’d like that to change; for four months, the Alexanders have been looking for a sit-down restaurant space in the Burlington area, with no luck. “We have to find somewhere we can open,” Kae Alexander says. “We need customer seat so they can really sit and have some music — I like music, too.”

Until then, diners hungry for a taste of true home-cooked Thai food can head to Alexander’s home and pick some up. The man who inspired her move across the globe can attest to its quality: “That’s how I’ve gained 30 pounds,” Bill Alexander says with a groan.