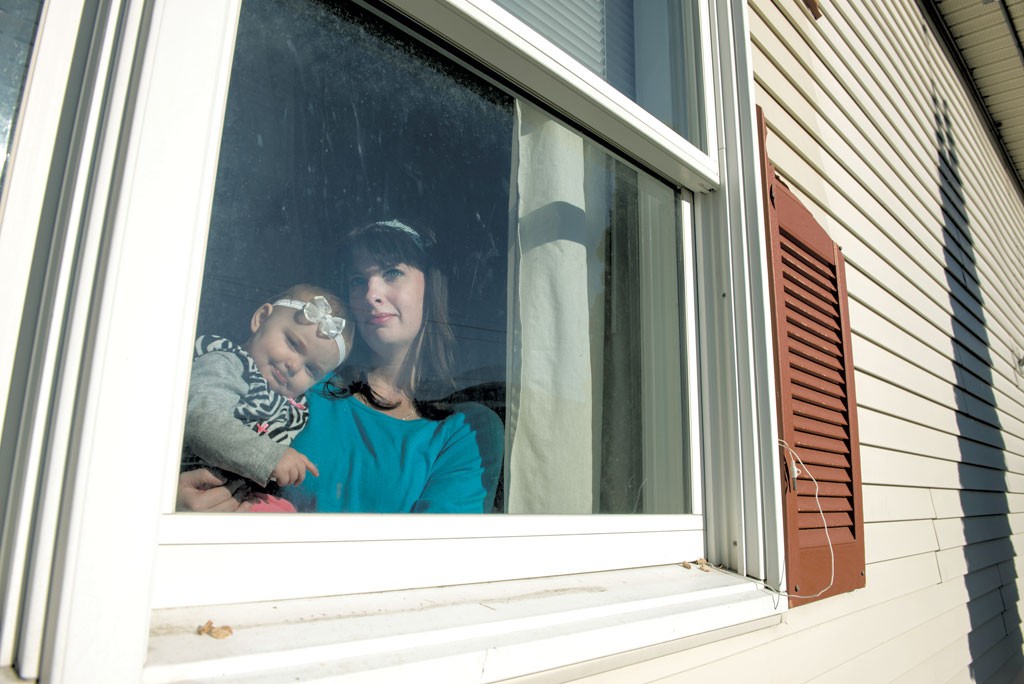 Wendy Pelkey-Grant was going to be released from prison in October 2013, almost six years after she killed her abusive husband during a confrontation in their West Rutland home. Her grown daughter used her own savings to secure a two-bedroom apartment outside of the city, where they planned to live together.

Pelkey-Grant, 49, looked forward to a quiet, anonymous life filled with trips to the doctor and the grocery store, check-ins with the probation office, and little else.

Yet 13 months after her release date, prison officials are refusing to let Pelkey-Grant join her family on the outside. She is one of more than 240 inmates who remain behind bars because the Vermont Department of Corrections finds their proposed postprison accommodations to be unacceptable, even though overcrowding costs the state $17 million every year.

After first telling Pelkey-Grant's family to find her an apartment in Rutland County, the DOC abruptly reversed course and is now forbidding the convicted felon from living anywhere in Rutland County.

The decision reveals a disagreement within the DOC: The agency's Rutland field office supported Pelkey-Grant's return to Rutland, but the central office vetoed it. That prompted her to file an unusual lawsuit asking a judge to reverse the central office's decision, which led to a Chittenden Superior Court hearing.

"DOC has abused their discretion," Prisoners' Rights Office attorney Kelly Green argued during the hearing for Pelkey-Grant. "Discretion requires thought. You have to weigh options, investigate options, and that hasn't been done here. She has incredible support that we don't often see for offenders. They have put time, money and effort to find a place they thought would be acceptable."

DOC Commissioner Andy Pallito declined to comment on the case. But he said his agency has ultimate authority in determining where prisoners can live when and if they are released before serving out their sentences.

Scene of the Crime

Pelkey-Grant was home in West Rutland on the night of her crime in April 2008. Her husband, Sean Grant, was arguing with his wife's then-21-year-old daughter, Alyssia Pelkey, according to police records. When his stepson, Eric Hall, 18, tried to intervene, Grant grabbed his throat. As Pelkey, Hall and Pelkey's boyfriend all struggled with Grant, Pelkey-Grant walked upstairs and grabbed a revolver, according to media reports.

In addition to fearing for her children's safety, Pelkey-Grant said her husband had abused her for years, and court records indicate she sought a restraining order against him in 2004.

"This was not a one-night thing," Alyssia Pelkey testified recently. "The cops were called a lot to my house."

Prosecutors initially charged Pelkey-Grant with second-degree murder, but agreed to a plea deal on a charge of voluntary manslaughter. In 2010, Pelkey-Grant was sentenced to six to 15 years in prison. With credit for time served, she was eligible for release in the fall of 2013.

In prison, she was cooperative and even mentored other inmates. DOC notified her she would be eligible for furlough after serving her minimum sentence, and for the duration she would be released and monitored by probation officers. But, like all inmates who are eligible for probation, parole or furlough, Pelkey-Grant could only leave prison if the DOC approved her future digs.

Finding decent housing is hard enough in Vermont. But for released prisoners, it has to be "suitable," too. In an interview, Pallito said the DOC evaluates a broad range of factors before approving housing options.

Corrections officials look at the dwelling's proximity to victims, for example, and to any negative conditions that contributed to their incarceration. Additionally, the DOC requires any cohabitants be willing to report the prisoner should he or she violate conditions of release.

The agency has found that a safe, stable housing environment — in which both the public and the released prisoner feel safe — is crucial to a successful release.

"Residence is a direct corollary to recidivism," Pallito said. "We do have a lot of factors, that I recognize. I also recognize that we have a recidivism mandate we need to get to." State lawmakers have mandated that the DOC lower its recidivism rate to 30 percent by 2017. The current rate is 41 percent, which is down slightly from recent years.

Pelkey-Grant's family began planning for her release months in advance. Alyssia Pelkey took the lead. First she asked Rutland probation officers whether her mother could leave the area and start over in Addison County with a clean slate. But the Rutland DOC office rejected the idea, preferring that Pelkey-Grant remain close enough that they could keep an eye on her.

So Pelkey and her fiancé found a two-bedroom apartment in Mendon, a quiet town sandwiched between Rutland and Killington. They scraped together everything they had for a security deposit and first month's rent, and signed a one-year lease.

A staffer from the Rutland probation office inspected the home, assuring that no liquor, drugs or weapons were inside, and confirmed the landlord had been informed that a violent offender was about to move in.

Landlords often retract housing offers upon hearing such news about potential tenants. But Pelkey's landlord said she had no problem with it. A Rutland probation officer gave a favorable report, and the apartment won the DOC's preliminary approval.

"He said he thought it was perfect for her to come live with us," Alyssia Pelkey testified recently.

Then, just a few weeks before Pelkey-Grant was scheduled to leave prison, the DOC notified her that they had received a complaint: A member of the victim's family felt that Mendon was too close for comfort. The person, whom lawyers and court documents did not identify, lives off a stretch of Route 4 that Pelkey-Grant would pass every time she made the 10-minute trip to Rutland for shopping or appointments, the DOC said.

In response, Pelkey and her fiancé mapped out circuitous routes — some of which would take more than an hour — so Pelkey-Grant could get to the city without using Route 4. "I would drive two hours every way to get my mom where she needs to go," Pelkey said.

Pelkey-Grant has no record of violence outside the shooting of her husband, and has never threatened or had any communication with anyone in Grant's family since the incident, lawyers said.

"They were concerned about their safety and what could happen," victims' advocate Ashley Fisk testified recently. "They were afraid of what she is capable of. They had real fear."

Not everyone in Sean Grant's family is opposed to Pelkey-Grant living in Mendon. His father, Terry Grant, said he has no problem with it. "I'm a Bible-believing Christian, and I believe God is forgiving of my sins unconditionally, and he expects me to do the same," Terry Grant testified.

"Wherever she decides to live is fine with me," he continued. "I was angry and bitter and all that stuff, but me and the Lord worked it out."

Rutland County is currently off limits to Pelkey-Grant. But in the past year, no one has been able to find her a DOC-approved home elsewhere, either. Corrections officials have reached out to landlords who sometimes rent to recently released inmates, to no avail. Pelkey-Grant spent months on the waitlist for a transitional housing program in Chittenden County.

"We are her support system," Alyssia Pelkey testified, noting the family has limited resources. "We are very close. We do not let a lot of people in because our situation is embarrassing. All we have is family."

In a later interview, Pelkey, now 27, said her family felt powerless dealing with the DOC. "It felt like we were being toyed with a little bit, because we don't have money to pay people to look into it for us or anybody in our family who is important. We didn't have any leverage, and they could do whatever they wanted."

At a cost of $58,000 annually, Pelkey-Grant has remained at the women's Chittenden Regional Correctional Facility in South Burlington. Meanwhile, the state's prisons are packed, forcing the DOC to pay $17 million a year to house up to 660 of Vermont's overflow inmates in various Kentucky and Arizona prisons. Vermont pays the privately owned Corrections Corporation of America to take the inmates off its hands.

Critics of private prisons have urged the DOC to abandon the contract and find ways to reduce the overall inmate population.

DOC officials have long countered that they aren't to blame — judges are sending them more inmates than the state has given them space for. Yet there are currently 241 inmates like Pelkey-Grant — more than 10 percent of the Vermont prison population — who are eligible for release but remain incarcerated because the DOC doesn't like where they plan to live.

Vermonters for Criminal Justice Reform says the DOC should get out of the housing game, saying they are far too quick to reject inmates' housing plans.

"That's the opinion of people in jail, that they're being denied for arbitrary reasons," said VCJR leader Suzi Wizowaty, a former state lawmaker. "Many of them do have potential housing options that would take them."

Pallito recently told a legislative committee that were he ever mandated to end his contract with CCA and bring out-of-state inmates back to Vermont, he would immediately release the housing-strapped prisoners to make room.

State law gives the DOC enormous latitude on the conditions they can impose on released inmates. And until her maximum sentence expires in nine years, the DOC will control Pelkey-Grant's life.

In the next few weeks, Judge Helen Toor will release a written decision on Pelkey-Grant's request to live in Rutland. Earlier this month, she rejected Menzel's suggestion to dismiss the lawsuit, cutting his argument short.

"The DOC is not above review," argued Green, Pelkey-Grant's attorney. "It's just an agency like any other agency. They have discretion, but they can't abuse it."