Package Deal: Taking a reading on a publishing trend 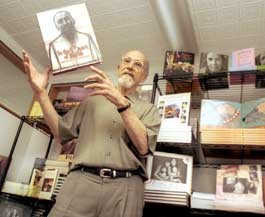 Burlington writer Chris Tebbetts has made the submission rounds. Determined to break into the young-readers’ market, he spent two years sending picture-book texts to publishers and stories to magazines. Then a New York friend who had penned an entry in the Sweet Valley High series suggested that he contact 17th Street Productions. A few months later he had snagged a contract to write the first four novels in a series about time travel for mid-grade readers.

Like most successful writers, Tebbetts used contacts and savvy to bypass the “slush pile,” where many publishers toss manuscripts they get from unknowns. But his story has a twist: 17th Street Productions doesn’t publish anything. Rather, the company is what’s known as a “book packager” — a slippery category that includes pretty much anyone who makes a book happen without holding its copyright or riding on its profits.

Book packagers can be craftsmen, professionals or fly-by-night operators. In 1980 their presence in the industry was already strong enough to warrant the creation of the American Book Producers Association, which represents its members’ concerns to publishers and the media. Today New York University offers a course in book packaging alongside its offerings in publishing. Yet the field remains unfamiliar to most.

Book packaging calls up images of the assembly line, or of books tarted up in pretty wrappers, like cosmetics or candy bars, to conceal a lack of substance inside. To readers worried about the “McDonald’s-ization” of the publishing industry, the rise of book packaging seems an obvious culprit — one reason why many packaging companies prefer to call themselves “producers” or “content specialists.” But the truth is that the term “packager” is almost as flexible as “publisher.”

So what’s the difference? Like agents and publishers, packagers often develop content — helping authors produce their original work, or enlisting them to write on assigned topics. Unlike publishers, however, packagers take on neither the rights to the work nor the cash burden of putting it on bookstore shelves. Instead, they make a mutually beneficial arrangement with a publisher, who bankrolls the project and gives it all the advantages of a marketing and distribution network. In return, the packager is usually responsible for developing, editing, designing and printing the book — all services traditionally handled by publishers.

Why do publishers use packagers? “They can contain the costs of a project that way; they can increase their capacity without increasing their overhead,” says Stephen Morris, president of Chelsea Green Publishing, Inc. in White River Junction. Although Morris hasn’t used the services of packagers, he says the trend is strong across the industry and is by no means limited to publishing juggernauts like Random House and Simon & Schuster.

Packaged books tend to be labor intensive. In books with lots of photos or graphics, for instance, using a packager relieves the publisher of the need to hire additional designers for a single job. Look at the copyright page of a fancy illustrated book on cooking or golf, for instance, and you’re likely to see a “producer” credited. Illustration-rich reference book series are perfect book-packaging candidates.

Many packagers make their money by repackaging familiar content in reader-friendly forms — hence the unflattering “fast-food” comparison. But some packagers deal exclusively with original work. A visit to the Burlington office of Verve Editions, an independent book production firm owned by Gary Chassman, puts to rest the notion that “packaged” books are invariably more, well, packaged than others.

A former publisher as well as a veteran of Burlington’s independent book-selling scene, Chassman founded Verve in 1993 in order to “collaborate with outstanding authors, artists [and] photographers… to create distinguished publications conceived to reach the widest possible audience,” he says. A shelf in his College Street office displays books on subjects ranging from Vietnamese cooking to Vermont author Stephen Huneck’s absurdist take on his dog’s brain. Most of these volumes look like high-end coffee-table books.

But Chassman explains that he selects projects not just for a look but for a “vision” — a marriage of images with original and compelling content. As examples of this approach, he points to such Verve titles as Sacred Legacy, with its crystal-clear reproductions of Edward S. Curtis’ photographs of Native Americans, and In the Spirit of Martin, which draws together decades of artwork inspired by the life of Dr. Martin Luther King, Jr.

While Chassman himself conceived the idea for In the Spirit of Martin, he generally develops projects that authors and artists bring to him. How does his role differ from that of a literary agent? “I retain control of the creative aspects and make sure the author has final authority,” he explains. When Verve shops projects to publishers, most of the creative work has already been done: A “dummy copy” showcases the book’s concept and layout. “We offer publishers original intellectual property,” Chassman says. “Not only do they conserve their resources [by working with us], but they get a product they can’t get anywhere else.”

Chassman’s company is a far cry from book-packaging firms that employ writers to produce run-of-the-mill content they already know publishers want: 5000 words explaining the stock market to sixth-graders, say, or 30,000 words on how to build a deck that won’t collapse. Writer’s Market Book of FAQs advises aspiring writers not to try to sell their services to these book packagers, who are usually looking for team players and seasoned pros.

But for writers like Tebbetts, who want to build a track record, approaching a packager can make sense. Packagers typically pay authors fixed fees — that is, no royalties — and require them to work on tight schedules. With only six weeks to produce each 35-40,000-word novel, Tebbetts says, “It’s a boot camp for writers. But if you need to learn that habit of writing every day — and you have to — this is a great way to do it.”

Since Tebbetts’ series is set to be published by the Puffin imprint of Penguin Putnam, editors representing both publisher and packager guide him in establishing the novels’ plot and tone: “The first draft they asked me to do was character-driven; then the publisher suggested that it get more action-oriented,” he says. Still, he adds, “I’ve been pleasantly surprised at the degree to which they want the series to come from me.”

Unlike most writers for established series, Tebbetts will see his name on the cover of the finished books, and he’ll receive royalties and sub-rights in addition to a flat fee. Most importantly, he knows that “this could be a stepping-stone to getting my original ideas published.”

There’s another way to do it. An Internet search for the term “packager” is likely to call up hundreds of tiny enterprises eager to help you self-publish — for a fee. If you’ve got a manuscript, these companies promise to end your search for a publisher and turn you into an “independent publisher” with full control over the content, design, print-run and marketing of your masterpiece.

But you may find yourself shelling out anywhere from $2000 to $20,000 for the privilege of seeing yourself in print, with no guarantee of a return. Unlike the vanity publishers of yore, self-publishing companies don’t take the rights to your book and leave you in the dust with a bill and a handful of “courtesy copies.” The profits are yours to reap — if you can find them.

Some of these packagers offer hard-nosed advice on the realities of the market. Others tell you to expect failsafe profits from the modern miracles of “print on demand” technology and Web advertising. But if you really want to see yourself in print, Chassman points out, it’s probably cheaper to assemble the team of professionals you’ll need yourself.

Barre author Thomas Davis concurs. After successfully self-publishing a book of local history, he considered using a packaging company to bring out his political mystery novel, The Governor’s Man. But a talk with the packager convinced him that “I knew more about marketing than they did.” He ended up employing local printers and graphic artists instead.

Packaging services tout success stories, like that of James Redfield’s The Celestine Prophecy, a self-published work of New Age philosophy that was picked up by Warner and became a fixture on The New York Times best-seller list. But for every Celestine Prophecy, there are hundreds, perhaps thousands of glossily packaged pet projects gathering dust.

What unites the shady self-publishing industry with the staid packagers of reference works is the do-it-yourself element they bring. With the aid of packagers, says Morris of Chelsea Green, “you could start a publishing business with nothing but an office and a phone.” Hence book packaging “isn’t a threat to independent publishing; it’s part of what makes it possible.