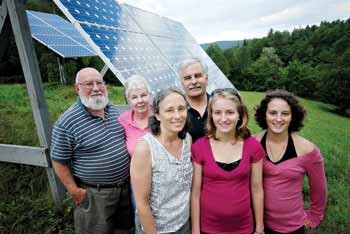 The Wolfe home in Strafford, though nestled in a peaceful Vermont valley, isn't exactly quaint. With solar panels and accompanying wind turbine, the domicile looks more like something out of California, or a sci-fi novel, than small-town New England. Outside, you'll find more reflective surfaces than on an artic glacier. Inside, there's another kind of energy brewing: Three generations of Wolfes live here, and all six members of the household are active environmentalists.

Nine years ago, Jeff and Dori Wolfe moved to Vermont from Illinois to start Global Resource Options, a solar-installation and -distribution company, out of their Strafford home. The business name has since been changed to groSolar - spelling intentional - and taken off. Now based in White River Junction, the company is picking up large-scale solar distribution contracts from Canada to the Caribbean, while maintaining a regional following for solar installations.

But while their business was rapidly expanding, on the homefront the Wolfes were consolidating. In 2001, Jeff's 77-year-old parents, Fred and Lorry, moved in with the family - not just to visit, but to stay. The Wolfes' multi-age story offers both an alternative take on the American dream and a lesson for anyone trying to walk the talk in a Hummer-lovin' culture.

On a recent Sunday afternoon, a reporter joins the family for a group interview on their back porch. GroSolar president Dori, 47, unwraps a loaf of zucchini bread. Jeff, also 47, brings out a tray of water glasses. His mom Lorry sidles in with two small rounds of local cheese. Jeff and Dori's daughters, Jessica, 18, and Sarah, 16, sit across a wooden table from their grandmother. Dori and her father-in-law Fred plop down in hanging hammock chairs.

Cutting a hunk of Brie, Lorry kicks off the discussion with a reflection on her activist heritage. "I've been at this since the 1970s," she muses. Fred, who has a white beard and an unflagging grin, nods his approval while rocking back and forth in the corner.

"Wait, wait," Jeff interrupts. "You were active before that, in college." His mom graduated from the Bethlehem, Pennsylvania, Moravian College for Women in 1952.

Oh, right. For a half-century, Lorry and Fred have been preaching peace around the world as well as in their backyard. In 1956, they traveled in post-war Japan, "when Tokyo still had dirt roads." Since then, they've been to more than 30 countries. Over a lifetime of living in small New England towns, they've served on a host of municipal boards and commissions. These days, Fred is a justice of the peace and a Strafford zoning-board member; he and Lorry volunteer at the local Universalist Society of Strafford and the Lions Club. "I've always been politically active," Lorry reflects, stressing that she considers herself more a Progressive than a Democrat. "We both tried to raise the kids with an awareness of what was going on in the world," she says.

Whatever the older couple did, it rubbed off. Sitting across the table, their son Jeff suggests that, while he came to environmental awareness on his own, his upbringing encouraged and nurtured that passion. The oil embargo of the 1970s "awakened in me a concern for the planet," he says. "And I found a ready and willing audience in my parents."

In the intervening three decades, Jeff has established himself as a renewable-energy pioneer. He and Dori, former college acquaintances, married in 1984. At the time, they were both working in the heating, ventilation and air conditioning field. In 1998, they moved to Strafford and launched their business. Nine years later, groSolar has grown to include more than 40 employees. Today, Jeff also chairs the photovoltaic division of the Washington, D.C.-based Solar Energy Industries Association and regularly advises Vermont legislators on renewable-energy matters.

Dressed in pink shirts like their grandma, Jessica and Sarah appear to be carrying on the family's environmental commitment, albeit indirectly. Jessica is currently working for her parents, having joined the payroll this summer. Earlier this year, she spent six months singing and "chopping wood" in Georgia - the country, not the state - on a trip sponsored by Village Harmony, a Vermont-based music association specializing in cross-cultural exchanges. She'll be a freshman next year at Wesleyan and plans to take courses in Russian, music and math.

Sarah treads on the artsy side of the civic spectrum. Accessorized with pearl earrings and a shiny watch, she recalls acting in a show her mom put on in the mid-'90s called "Save the Earth." Now, in addition to penning the annual Strafford Christmas pageant, she dances - sometimes with her dad - with the progressive, Sharon-based Flock Dance Troupe. Sarah's productions "vary from . . . classical theater to having an environmental message," Jeff observes. "It's one of the things that attracts her to the theater, to get the message out through the arts."

Do the younger Wolfes ever feel intimidated by their radical heritage? "I just hope I can follow through with it," Sarah says with a sigh. But according to Jeff and Dori, she and her sister are socially aware by their own volition. To illustrate Jeff's claim, he recalls that, just before the American invasion of Iraq in 2003, the whole family went to a protest in Washington, D.C. When Jeff decided to attend a subsequent demonstration, he didn't expect his offspring to accompany him. "You never know if you're dragging your kids along," he notes. "But when they say, 'Yes, yes, yes!' and they drag their friends along, you feel like you're having an impact."

But, adds his eldest, protesting isn't the ultimate measure of responsible citizenship. The family's other commitments bear that out. Jeff, for instance, happens to be a certified presenter of An Inconvenient Truth, Al Gore's Oscar-winning documentary about climate change. Dori has served on the board of trustees and festival committee of SolarFest, an annual renewable-powered music festival in Tinmouth. Just this April, the family helped organize a local action in solidarity with Bill McKibben's Step It Up push for sensible federal climate legislation. Plus, the clan preserves food and makes its own fruit and dandelion wine. "I'm more about living sustainably," young Jessica reflects, "doing what I can to grow my own food . . . living more locally."

Listening to this family yak on its country porch, you might think they were living an effortless, fossil-fuel-free fantasy. But according to Jeff and his parents, a quick run-down of family accomplishments doesn't convey all the hard work and sacrifice behind them. Fred and his wife were both "children of the Depression," says the New Jersey native. "That taught some hard lessons that I don't think we've ever forgotten." Pennsyl-vania-raised Lorry adds a favorite adage: "Make it do, do without."

Their son Jeff may be a successful CEO, but he, too, understands that basic impulse toward conservation. Growing up, his parents helped him cultivate an appreciation for activities such as gardening and animal husbandry; they preserved food not just for fun but to save money. When he was a senior in high school, his folks replaced electricity with kerosene in their Massachusetts home for a year. "The other kids in my school used to call me a cannibal," he reports with a chuckle.

"We were the only ones for conservation" in a Republican district, adds his mother. "They thought we were crazy."

"I thought we were crazy," Jeff mutters.

Sarah pipes up, "How come I didn't know about this? This sounds like Little House on the Prairie!"

Despite their progressive philosophies about life and work, the Wolfes are not dogmatic about their moral and political orientation. Lorry points out, for example, that she used to be a Republican in the '70s before switching parties. And even though Jeff and Dori heartily supported the Vermont legislature's 2007 comprehensive energy bill - which Governor Douglas vetoed - they're not anti-nuclear per se. The controversial Vermont Yankee nuclear facility in nearby Vernon, Jeff points out, is vital to Vermont's short-term energy future. As a family, he says, "We've been on many different sides" of political issues. "It depends on what we think is right."

Even the Wolfes' house - never mind its "alternative" image - speaks to Jeff's philosophy. A few years back, when they began installing solar panels and a wind turbine, the family decided to hook up to the municipal power supply rather than run the system "off the grid." While Jeff expresses fondness for "simpler, less centralized" energy systems, his mantra doesn't translate to an "anarchistic, government-is-bad" attitude, he says.

"If you want to make the biggest difference, you have to do it mainstream," adds Dori.

Jeff concurs. "If it's alternative, it'll never become the mainstream," he flatly declares. "I rarely feel that I'm out on the edge of something."

Like their parents, the Wolfe girls don't consider themselves particularly alternative, at least relative to their classmates. "There's nothing we have to do differently, it's just an awareness," Jessica explains, adding that she knows a neighboring family living three generations deep - and off the grid. Then she adds, "The only thing that's different about us is that we have power when everyone else doesn't" - this house gets the majority of its power from sunshine.

Ironically, the most radical thing about the Wolfes could be their nightly din. Most American families cram three generations together only for a Thanksgiving meal. By contrast, this family dines together regularly and appears to enjoy the ritual. Dori recalls that, for a few years, they even shared cooking duties - think "Brady Bunch" meets Shaker Colony. Now, Lorry makes meals during the week. Tonight, Dori is whipping up red-cabbage coleslaw, potato-leek stir-fry and a summer-squash medley courtesy of the family's weekly Community Supported Agriculture share from a Thetford farm.

True to their flexible philosophy, however, Wolfe leadership doesn't make meal attendance mandatory. As Sarah, who got her start making mac 'n' cheese, notes, "It's more that there always is a dinner you could come home to."

As a few southerly, white clouds roll in overhead, the Wolfe family's porch cools off. Meanwhile, its members have loosened up considerably. At the table, Lorry is helping herself to more cheese and crackers. Jeff, who has snagged a hammock chair, rocks back and forth next to his wife.

Communal life is "not going to be all roses," resumes Dori after a pause. Just as her in-laws pitched in over the years with family chores and child care, she'll help her daughters. "We know there'll be a time when we'll have to give back," she suggests. The sentiment is intergenerational. "We don't feel like a burden," says Lorry, "because we're contributing."

Then Jessica perks up suddenly in the middle of the room, and everyone's body language responds in kind - a fitting choreography for a family that seems to operate on the same wavelength. "Maybe some day . . . " the young woman muses, "it'll be a four-generation family?"

The others tense up. Jeff's face pales. "Is there something we should know?" he asks nervously.

Jeff exhales and settles back into his hammock chair. Then Dori warns sharply, "Don't rush it!"