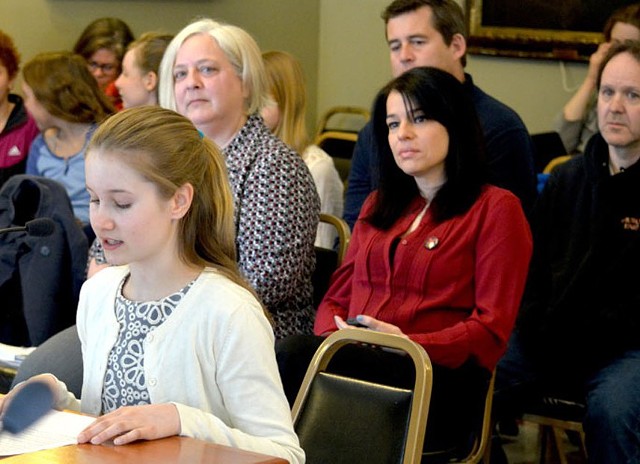 On the first Sunday in October, Burlington will be one of 130 cities around the world to hold its first-ever global march for elephants and Rhinos — thanks to Vermont Commons School seventh grader Taegen Yardley. The Charlotte kid has been interested in elephants since she helped run a bake sale to raise money for The David Sheldrick Wildlife Trust in 2012. Since then, Taegen has read articles and watched documentaries about how the animals are killed for their ivory in Africa.

Last spring, local activists Laurel Neme and Ashley Prout McAvey asked Taegen to testify at the Vermont Statehouse in support of a bill to ban the sale of ivory in Vermont. After that testimony, a woman from the nonprofit Elephants DC suggested Taegen participate in the Global March for Elephants and Rhinos in Washington, D.C. Taegen decided to organize a march locally instead.

To spread the word, she enlisted representatives from 14 different schools to tell their classmates about the march. In the weeks leading up to the event, Taegen and her friends have held an elephant T-shirt-making workshop at Davis Studio and created tusks out of papier-mâché, wire and pool noodles for marchers to carry. Organizing the event has taught her more about elephants, Taegen says, but it's also given her leadership skills. "It's been a really amazing experience."

The Global March for Elephants and Rhinos takes place on Sunday, October 4, at Burlington City Hall on Church Street. Marchers gather at 11 a.m., the march starts at 11:30 a.m. and a rally at City Hall follows at noon. For more information and optional preregistration, visit ivoryfreevermont.org.

An earlier version of this article misstated the recipients of money raised by Taegen as being Ivory Free Vermont. The money actually went to The David Sheldrick Wildlife Trust