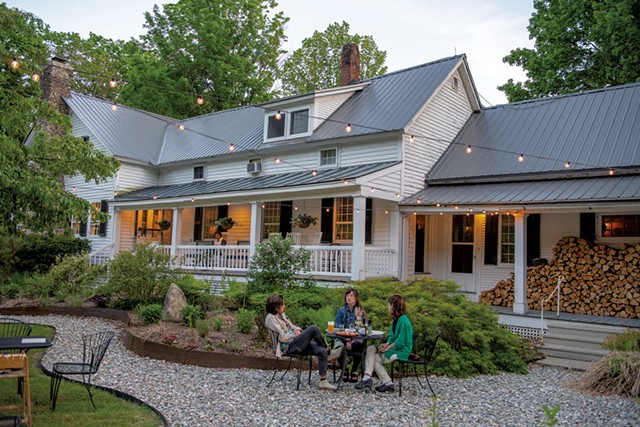 As soon as Jason Kirmse and Kate Baron closed on the purchase of the former Mary's Restaurant and Inn at Baldwin Creek last summer, the couple and their two young sons ran straight to the creek on the Bristol property and jumped in for a swim.

Kirmse spent the next few months clearing debris and cutting back foliage that had obscured the waterway, a rippling ribbon over rocks and around curves southeast of the inn, which they renamed the Tillerman. The couple created a path down to the rocky bank so guests could easily access the natural feature.

"I feel like this creek is a real draw that we haven't really marketed much," Baron said during a recent tour of the grounds. "You can actually get in it. You can fish in it. You can explore it."

"We wanted it to feel really unique and kind of quirky and eccentric." Kate Baron tweet this

The Tillerman's owners have embraced many such discoveries as they've spruced up the property, a 38-year fixture for locals and travelers, and made it their own. Inside, they ripped out carpeting and restored the original wood floors. They refurnished the six guest rooms, blowing a breezy West Coast vibe into the sprawling 1797 New England farmhouse. Whimsical, vibrant artwork by Baron's mother, Torrey Baron, adorns nearly every wall and inspired the Tillerman's logo and website illustrations.

"We wanted it to feel really unique and kind of quirky and eccentric and not corporate," Kate Baron, 47, said of the décor. 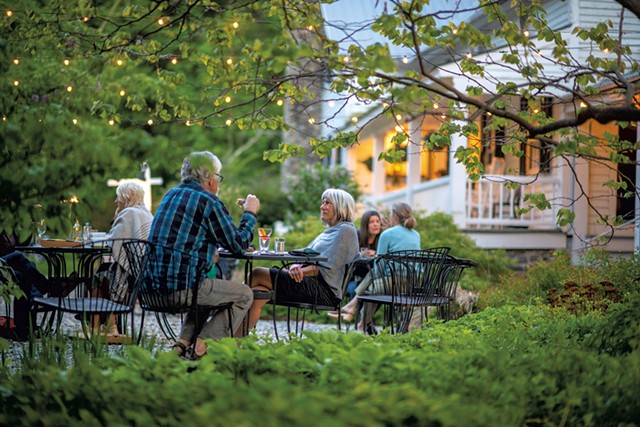 The restaurant veterans from California overhauled and opened up the kitchen to enhance the communal experience. Baron and Kirmse turned the former front dining room into a parlor and added a 16-foot maple farm table, which — they're proud to admit — they got for a steal at $800 at an estate sale.

Mary's Restaurant pioneered the state's farm-to-table movement when Doug Mack, a founding member and first president of the Vermont Fresh Network, opened it in 1983 with his wife, Linda Harmon, helming the inn. I had heard accolades about the place but never made it there before it changed hands. On an unusually warm spring evening in mid-May, I arrived for an overnight stay. 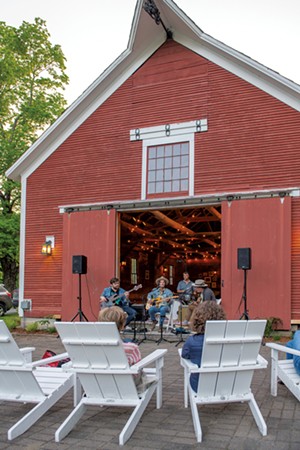 The inn hosts live music every Wednesday, and the weather allowed that evening's trio — Michael Chorney, Lowell Thompson and Pat Melvin — to set up at the open door of the big barn across from the restaurant's loose-stone patio. By the time my husband and I arrived for dinner, a crowd had moved to the Adirondack chairs facing the barn, and the patio tables were full.

The owners' 7- and 9-year-old sons, Oliver and Henry, played on the green under a big magnolia tree's fragrant white blooms. The inn's well-tended gardens would soon burst with color. Around the grounds, firepits occupy different "zones" where guests can gather: in the garden, outside the barn, near the creek.

My husband and I slowed down with drinks on the porch while waiting for our table. I sipped the Ward Eight, a blend of rye whiskey, citrus and pomegranate molasses, which was lighter than it sounded and sparked my appetite.

The Tillerman's menu is focused and seasonal. Most main dishes emerge from the wood-fired oven that dominates the open kitchen, overseen by chef Justin Wright. The restaurant sources everything from as close to Addison County as possible. The greens and produce come from Footprint Farm in Starksboro or Last Resort Farm in Monkton. Pizza crusts are made with Elmore Mountain Bread's milled flour. 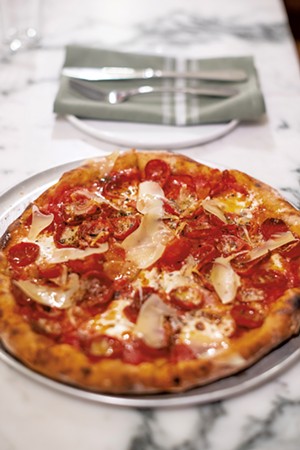 My husband and I dug into an antipasti plate with burrata from Maplebrook Farm in North Bennington, charcuterie from Barre's Vermont Salumi, slabs of speck, olives and breadsticks made from leftover pizza crust dough — the perfect foundation for the savory balance of flavors. We shared a Caesar salad of Little Gem lettuces, expertly dressed and topped with anchovies.

Anchovies reappeared atop the wood-fired broccoli rabe, doused with crispy bread crumbs and chile flakes. The Fungi pizza packed a pungent punch with slabs of Bayley Hazen Blue cheese from Greensboro's Jasper Hill Farm amid the mixed Blue House mushrooms from Ferrisburgh, enhanced with roasted garlic. I finished the meal with a smooth, creamy and not-too-sweet panna cotta topped with rhubarb right from the inn's garden.

My husband went home to Burlington to stay with our dogs, who aren't allowed inside the inn, while I headed upstairs for a night in the spacious and serene Ramona room. It has a European-style en suite bathroom, with the pedestal sink in the room itself and the toilet and clawfoot tub/shower in a separate space behind a door. The Tillerman stocks Ursa Major soaps and toiletries, made in Vermont.

The owners outfitted each guest room with Saatva mattresses, Brooklinen sheets and duvet covers, and plush towels befitting a five-star hotel. My king-size bed was so comfortable that I quickly grew drowsy while checking my email. I cracked one of the inn's original windows to let in the cool night air and fell asleep to the sound of the flowing creek. 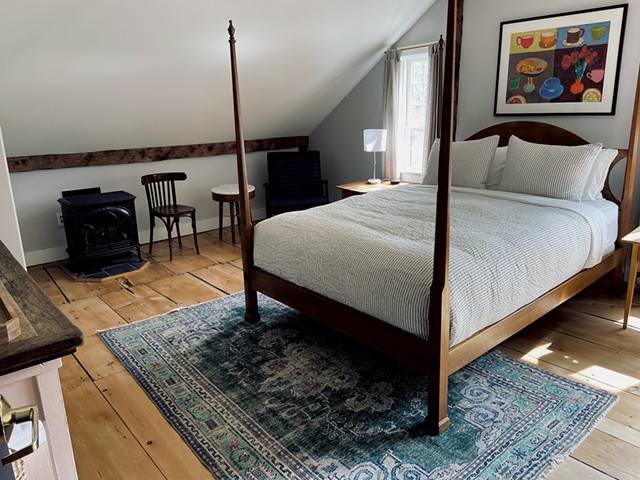 The Ramona's bathroom is one of just two in the Tillerman that haven't had a recent update, which the owners plan to do. Many of the guest bathrooms already boast elegant tiling and modern fixtures. The North Country room, for example, offers a sophisticated king suite with a gas fireplace, sleek bathroom and small sitting area with built-in twin beds facing head-to-head under the slanted ceiling. Also ideal for traveling families, the Keepsake room has a separate sunny nook with bunk beds.

Tracy and Dennis Iannelli, Boston residents and longtime Stowe visitors, stayed at the Tillerman the night after I did. The Bristol inn quickly made their list of special places in Vermont, Tracy said.

"The property is spectacular," she enthused by phone a few days later, marveling over the quality of the food and the charm the owners have infused in the place. "It was just so well thought through. They did so much in such a short amount of time. It's astounding. And their sign [in front] that says 'eat, stay, celebrate' — that's their vision, and they're nailing it."

Baron grew up in Armonk, N.Y., and Kirmse in Fort Lauderdale, Fla. They met in northern California and lived there for 20 years. Kirmse owned restaurants, and Baron worked as a chef and in sustainable food systems. In early 2020, facing skyrocketing real estate prices and increasingly intense wildfires, the couple sold their stake in the restaurants and prepared to move to Spain. They had airline tickets and were arranging their visas just as COVID-19 shut down most of the world and ground international travel to a halt. 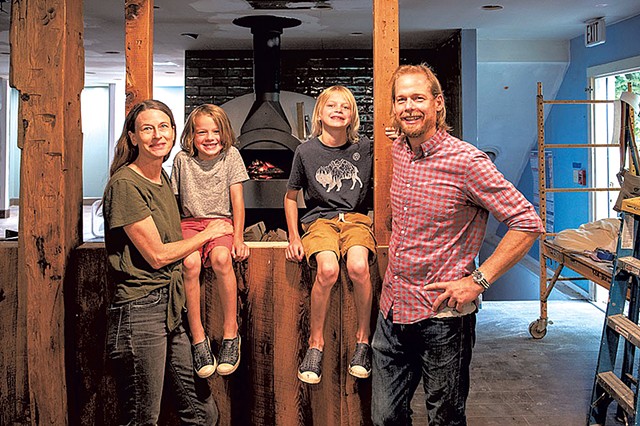 So they shifted their attention to Vermont, where the culinary and political culture seemed like the right fit. They packed up the car and kids and drove east to scout out possibilities. In November 2020, the Mary's property went up for sale.

The sellers accepted another offer, but that deal fell through. When the Bristol inn came back on the market, Baron and Kirmse figured they'd try again. They closed on the property last June, moved into the innkeepers' house a few dozen feet from the Tillerman and welcomed their first guests last fall.

Baron conceived the name of the inn long before she ever set foot in Bristol, she said. Growing up, she played the Cat Stevens album Tea for the Tillerman on repeat, and her love for it never wavered. Stevens, who later became a Muslim and changed his name to Yusuf Islam, performed in San Francisco in 2016. Kirmse bought his wife a front-row ticket so she could go to the show while he stayed home with the kids.

Stevens was playing over the parlor speakers on the morning of my stay, when I found a locally anchored breakfast spread on the long dining table: hard-boiled eggs from Kenyon's Farm in Waitsfield, banana bread baked with Elmore Mountain Bread's flour, yogurt from Rogers Farmstead in Berlin, housemade granola and rhubarb compote from the inn's crop. I brewed a French-press pot of coffee from Burlington-based Brio Coffeeworks and dipped my peeled eggs, which had flavorful, bright-orange yolks, into fresh-flaked Maldon salt and chile flakes. 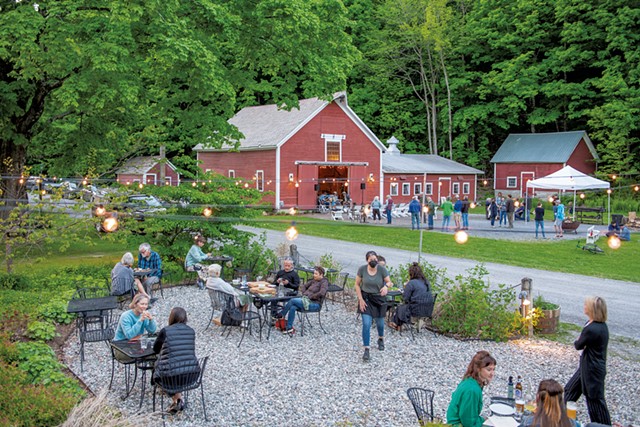 With the heart of Bristol just three miles down the road, there are plenty of nearby places to explore, and I planned to visit a few on my way out of town. For edible treats, head to Downhill Bread, Jones the Boy Bake Shop, and the new Minifactory café and market launched by locally famous jam maker V Smiley. For gifts, don't miss the Vermont HoneyLights store.

Before I left, Baron and Kirmse showed me the spot at the front of the inn where they plan to plant a flower bed and kitchen garden. They aim to grow herbs and specialty vegetables such as Jimmy Nardello peppers. Off the inn's southern side, facing the creek, they'll add an arbor, where they hope to host more weddings — two are scheduled for this summer and fall. They've cleared the rustic barn, which is wide open inside and has original beams, for events, as well.

Baron aims to use a small space off the restaurant as a mercantile shop, selling products such as loose-leaf "tea from the Tillerman" made with the inn's own herbs. Beyond the garden, along Route 116, Kirmse planted 20 sugar maple trees, which will take at least a decade to mature.

The couple's commitment to the buildings and the land is clear. Baron's description of Cat Stevens' music fittingly applies to this 200-year-old property: "It just always stood the test of time."