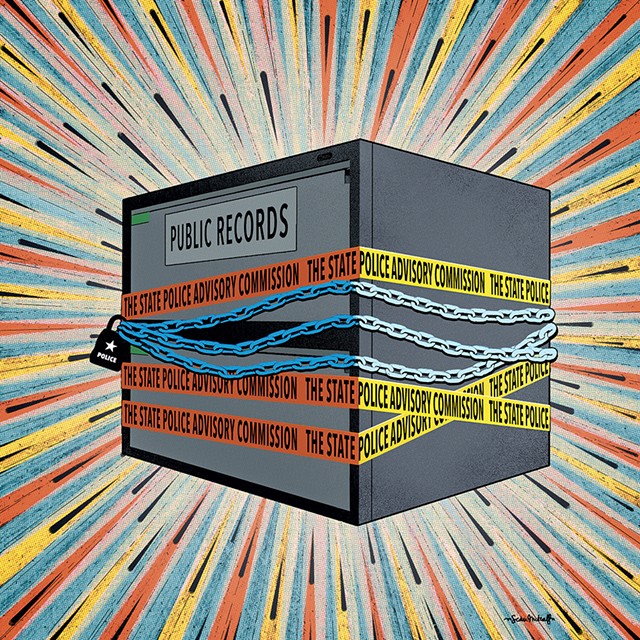 The Vermont State Police held a press conference in February after one of its troopers killed an armed suicidal man on the side of Interstate 89 — the third fatal shooting in six months. A reporter asked Col. Matt Birmingham: Is it time to empanel a civilian oversight group for the state police?

"We have one. It's been in place many years," Birmingham replied and gave a shout-out to the State Police Advisory Commission.

By law, SPAC has the ability to serve as a powerful independent regulator of the state police. Tasked with advising the commissioner of public safety on internal investigations, grievances and promotions, its members have access to internal affairs records and can refer state police cases to outside legal authorities and release information to the public.

But critics of the commission note it operates in secrecy and serves as little more than a rubber stamp for departmental disciplinary decisions.

"It's a black box," said American Civil Liberties Union of Vermont staff attorney Lia Ernst, who said she failed to persuade SPAC to release records of a recent internal affairs investigation of a trooper who was eventually fired. "The public is left in the dark."

Seven Days first examined SPAC's work in February 2013, observing that it "conducts most of its business behind closed doors and releases almost nothing about its own findings."

In the intervening five years, numerous high-profile fatal shootings in Vermont and across the country have increased tensions between the public and law enforcement. Recent studies suggest Vermont troopers disproportionately target minorities for searches during traffic stops.

Yet nothing about SPAC has changed.

SPAC has not released any findings in the past five years, and the minutes from its deliberations read remarkably alike.

I attended one of the group's bimonthly meetings last Thursday on the second floor of the Department of Public Safety's Waterbury headquarters. Officers kept my driver's license at the front desk while a staffer escorted me through locked doors to a tiny conference room, where I took the sole extra seat along a wall.

I was the first member of the public to attend a SPAC meeting in a year and a half.

Everybody else who showed up — five members of the board, along with Col. Birmingham, Commissioner of Public Safety Tom Anderson, and Lt. Julie Scribner, who heads the state police internal affairs unit — sat around a conference table.

For three minutes, the commission members engaged in idle chitchat and approved minutes from the previous meeting. Then they voted unanimously to go into executive session. An amiable Birmingham escorted me out of the room to the first-floor lobby, while everyone else remained. An hour later, I was allowed back inside, where I listened to talk about the state police budget and the recent gun-control bill-signing ceremony. Five minutes later, Sheahan ended the meeting.

That's how SPAC sessions usually go, according to minutes from the past few years.

Technically, anyone can petition the commission with a complaint related to state police conduct. In October 2014, Brattleboro attorney Sharon Annis went with a client, Walter Zawalick of Guildford, who wanted SPAC to investigate a case that he claims ruined his life.

Four years earlier, Zawalick had driven to the state police barracks in Brattleboro to report that a woman had attacked him. He told Trooper Kurt Wagenbach that it was not a fight. He had recorded the encounter and asked the trooper to listen, according to Zawalick's complaint to SPAC.

Wagenbach refused to listen, and, after speaking to others involved, concluded that the altercation had been a mutual fight, according to Zawalick's complaint. He charged Zawalick with domestic assault. As a result, Zawalick was fired from his security job at a local hospital.

Four months after his arrest, prosecutors listened to the recording — and dropped the charges, according to Zawalick's complaint.

Zawalick and his lawyer wanted the trooper investigated and potentially disciplined. But the group ruled that Wagenbach's actions "were neither negligent nor derelict."

"They listened to us very politely and did nothing at all," Annis said. "It just got buried. I found it pretty shallow. It's not worth it. You're not going to get anywhere."

Of particular concern to SPAC's detractors is the involvement of Sheahan, a partner at the Burlington firm McNeil Leddy & Sheahan.

Sheahan isn't just any attorney; she's a go-to lawyer for Vermont cops who have been accused of mistakes or wrongdoing. She represented the Brattleboro police officers who shot and killed a suicidal man wielding a knife inside a church in 2002. She was the lawyer for Bennington police officers accused of racially profiling a black man whose conviction for drug dealing was overturned by the Vermont Supreme Court. Sheahan does not represent the state police.

"Stevie Wonder can see that is a conflict of interest," said Mark Hughes, cofounder of the advocacy group Justice For All, referring to the blind musician. "If the State Police Advisory Commission has responsibility for reviewing alleged police misconduct, and Nancy has a responsibility within her practice for defending law enforcement officers, it is absolutely problematic."

In an interview after last week's meeting, Sheahan said her experience is an asset.

Sheahan said that SPAC "starts from a belief" that investigations are "confidential," out of concern for the privacy of troopers. A reporter can't even discover which cases are being discussed.

Some recent cases that haven't been made public include: Stephen McGranaghan resigned from state police last year after he and another trooper set an illegal fire on his property in Stannard; trooper Christopher Brown, who fired upon the suicidal man on the side of the highway, shot a man in the leg three years earlier; in September 2017, another trooper pulled over a speeding rabbi, held him at gunpoint and handcuffed his family.

Did the commission find wrongdoing or recommend discipline in any of those incidents? Do commissioners ever disagree with findings by the state police internal affairs unit?

Nationally, the trend is an increase in transparency. Groups that oversee police have won new powers in recent years, according to the National Association of Civilian Oversight of Law Enforcement.

"Years ago, police chiefs were so against any kind of oversight," said Liana Perez, the association's director of operations, who sits on one such board in Tucson, Ariz. "Now they're embracing it. They feel it's another tool for them to build bridges with their communities, because they need those bridges to do their work."

In a recent interview, Vermont's Col. Birmingham said he, too, believes in greater scrutiny of law enforcement.

"It can't be any other way — we answer to the public," he said. "I think what they do is important," he said of the State Police Advisory Commission. "SPAC doesn't get enough attention."

He noted that other groups watch over the police in Vermont, too, including the legislature, selectboards and city councils.

In fact, most Vermont police agencies operate without any oversight. Only Burlington and Rutland have civilian commissions that monitor local police. "I don't think we have any tools in place that are doing the kind of oversight we should be doing," said Burlington Police Commission chair Christine Longmore.

Burlington police leaders update the commission on some internal investigations, but commissioners have no say, Longmore said. Cases involving anything remotely serious are deemed confidential personnel matters outside the scope of the group, she added.

The commission often discusses relatively trivial matters, such as members of the public complaining about cops being rude, or confused interactions between cops and New Americans.

Perez said civilian oversight groups need muscle to be effective. Some groups, including bodies in Seattle and San Francisco, now have subpoena power over police. The organizations need active members with no conflicts of interest, Perez said. And they must have transparent meetings and release reports to the public.

"The community shouldn't have to file a public records request to know what your oversight entity is doing," Perez said.

In Vermont, even that won't cut it.

Last week, Seven Days filed a public records request with Sheahan, asking for the results of all internal Vermont State Police investigations and any SPAC findings or reports since January 2017.

She rejected the request, saying the records are confidential.