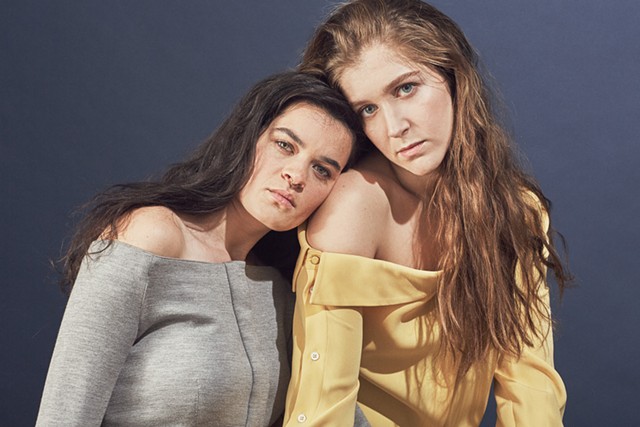 Hana Elion and JJ Mitchell operate their band, Overcoats, with an integrated process that seems to go far beyond the norm. The two share an identical worldview and artistic vision that manifests in their creative process. Throughout Overcoats' debut album, Young, their voices blend into harmonic perfection, disappearing into one another like shadows. The same can be said of the duo's songwriting. Their soulful, folk-tronic tunes are wholly collaborative endeavors. There are no "Hana" songs or "JJ" songs — only Overcoats songs.

The Brooklyn-based duo met while attending Wesleyan University and developed their project in the school's thriving live music scene. Before making a name for themselves off-campus, they ended their senior year with a victory at the school's battle of the bands. Aside from an unnamed band that featured a female member, Overcoats were the only female act on the bill, which they believe speaks to the harsh conditions for women in that particular scene — and the music industry in general.

Overcoats play on Saturday, April 29, at the Higher Ground Showcase Lounge in South Burlington. Seven Days recently caught up with Mitchell and Elion by phone.

SEVEN DAYS: Everything I've seen and read about you characterizes the two of you as being incredibly close. I've seen terms like "near-telepathic" used to describe your relationship. Is that true?

JJ MITCHELL: I feel like that makes it sound otherworldly or kind of alien. I think that a lot of female friendships experience something similar. It's almost like a sisterhood.

It comes in handy when we're singing or when we want to write a harmony. It also just means that we're on the same page about what we want out of life and the way we see the world. It's just really special to go through the world with someone you see eye-to-eye with.

HANA ELION: We finish each other's sentences and have similar ideas. We get each other tour presents. The other day, we had an hour in the airport, so we went off and got each other gifts. We literally got each other the exact same gift.

HE: Solid perfume. Not only that, it was the same exact...

JM: Scent. We both got each other rose-scented solid perfume.

SD: Do you ever have stylistic disagreements? How would you work that out if you did?

HE: Maybe there were a few things when we were recording [Young], but usually [by] talking things through, we end up agreeing. I can't think of anything where I've really disagreed.

JM: We might disagree once in a blue moon about a note at the end of a line. It's so minimal. I think that we do workshop lyrics: We'll be like, "Can we make this lyric more honest and ugly than it is?" But when that kind of thing happens, it's a team effort. It's never a fight.

HE: When we're writing together, there's no such thing as us disagreeing, because that can't happen. We know that it's right when both of us feel it. I remember when we were working on our first song, "Little Memory," and going through 50 kick-drum sounds [with producer Myles Avery], JJ and I both jumped at the same one. And they all sound exactly the same.

SD: Speaking of "Little Memory," JJ said in an interview for Wesleyan's music blog, Aural Wes, "When we wrote 'Little Memory,' those were dark times." Are you comfortable elaborating on that?

JM: I think that we started writing "Little Memory" when we were both questioning our romantic relationships, the way that our family dynamics were, [and] the way that our mothers related to our fathers. When we were feeling sad and sort of lost in the winter of our senior year, we wrote [it] as this healing process.

HE: I think "Little Memory" was a really important step for us because ... that was the first moment when we were like, "Wow, music is something that can help us make sense of our lives."

SD: Has your process changed much between "Little Memory" and the freshest tracks on Young?

SD: What are some things you miss about the Wesleyan music scene? What do you not miss?

JM: Wesleyan was an amazing place for live music. Every evening you could go somewhere on campus and see other student bands. [We] have trouble articulating what we don't miss, but there was a certain pressure to make a particular kind of music — and also to not take yourself too seriously. To have pride in your work and to self-promote was sort of not cool. And I think that hindered us at the beginning.

HE: What that translates to is a culture where you're not supposed to advocate for yourself. And that's really fucked, because then there are no women in music at Wesleyan. You can't be too cool, but you can't be not cool enough. There was a lot of pressure to fit a sort of laissez-faire attitude about it.

SD: Most songwriters have one song that's like the favorite child. Which one is your special baby?

HE: It changes a lot for me. I'll have a special baby one week, and then I'll have a different [one] the next week. It's funny — the family metaphor — because that's what our album is about. "Father" opens the album, and "Mother" ends it. So they really are like children to us. I think "Kai's Song" is really speaking to me right now. It's bound to change in the next couple of days.

JM: We used to have a thing [called] "new song high." We [only] wanted to sing the last song we had written.

SD: All of the songs from your first EP are also included on Young. Have they changed in any way?

HE: They've been changed a little bit in arrangement and definitely in production. It feels like a lot more change to us than it probably will to listeners. We really wanted to bring those songs into a new space and almost kind of treat them as brand-new songs. We had to start from scratch on all of those songs, so it felt like they were [made] in the space of the album. They've been given an upgrade.

The original print version of this article was headlined "Double Vision"