Outright Vermont Expands Its Reach to Queer Kids in Vermont 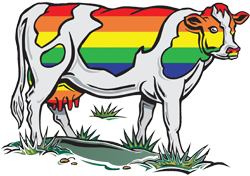 “Earmark.” Nothing sounds sweeter to a Vermont nonprofit than a guaranteed federal appropriation to fund a specific project. Rep. Peter Welch requested 29 of them last year as part of the federal budgeting process, for local organizations ranging from the Chittenden County Transportation Authority to the Northern Forest Canoe Trail.

Of 9297 projects nationwide that won $10.2 billion in earmarked funds, one of the surprise recipients was Outright Vermont, the Burlington-based queer youth advocacy organization. It’s the first time Outright, or any Vermont organization serving the LGBTQ community, has ever been awarded a federal earmark.

In August, the nonprofit will receive the first installment of a $100,000 appropriation that will be doled out over the next three years.

The money will allow Outright to expand its anti-bullying work, which currently accounts for one-third of the small nonprofit’s $240,000 annual budget, to parts of the state that don’t typically get the message.

Demand for Outright’s anti-bullying presentations has exploded over the past two years. During the 2008-2009 school year, Outright presented 78 programs to 2200 people. Last year, the organization reached 4000 people through 151 presentations.

The spike is due to more and more schools requesting the anti-bullying programs, says Outright Executive Director Melissa Murray. Administrators are beginning to realize that gender-based bullying is a much more insidious problem than previously thought, she says.

The numbers speak for themselves. The most recent Youth Risk Behavior Survey found that 14 percent of the 11,427 Vermont teens polled had been bullied in the previous month. The statistics are even higher for youth who identify as LGBTQ — 36 percent report being the target of harassment.

While not all of that abuse can be attributed to sexual orientation or gender identity or expression, almost all the students participating in Outright’s workshops say they have experienced bullying in various forms. “It’s the first time for some of them that they’ve acknowledged it to other people,” says Saben Littlefield, who runs the organization’s anti-bullying campaign.

The presentations have had audiences ranging from eight students to 200, depending on the schools’ needs. One popular activity involves an exploration of the gender spectrum. Students are asked to think of the most stereotypically masculine and feminine celebrities. They are pressed to describe what makes these celebrities masculine and feminine, respectively. The group then talks about how realistic these gender ideals are. The exercise is meant to show youth that there are many different ways of expressing masculinity and femininity, Littlefield says.

Welch is sold on the process. “Vermonters need to look no further than the tragic 2003 suicide of Essex eighth grader Ryan Halligan to understand the horrific consequences of juvenile bullying and harassment,” he says. “In the seven years since, we have made strides in raising awareness of this endemic problem — but we have not solved it.”

The federal funds will also allow the organization to create more permanent programming for LGBTQ youth in Rutland and Brattleboro. “The hope is that the earmark will be a foundation,” Murray says, “and we can hire someone else in one of those underserved communities.”

On April 7, 2009, Vermont became the fourth state to legalize same-sex marriage, after a historic vote in the legislature. Now what? Former Outright Vermont director Lluvia Mulvaney-Stanak ponders that question in a guest op-ed this week. One answer: that organization's anti-bullying efforts in local schools. Meanwhile, The Vermont Freedom to Marry Action Committee is supporting candidates who stood up for marriage equality -- Republicans included. In this issue, too, we profile new Flynn Center executive director John Killacky and NECI executive chef Tom Bivins -- both of them happily married...to men. In an interview, "Endora" tells us what goes down at the gay refuge Faerie Camp Destiny in southern Vermont. And speaking of "camp," don't miss the PRIDE calendar, or your Saturday will be a drag.