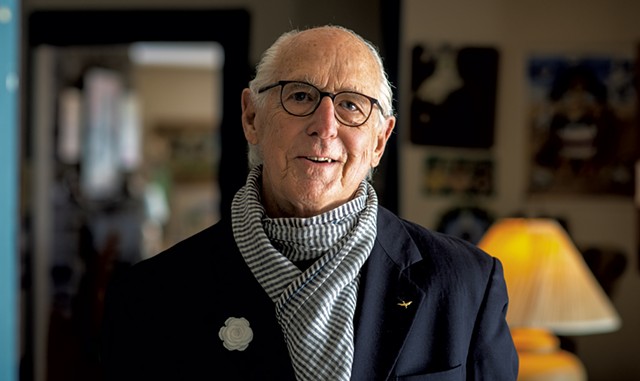 The first time William F. Brooks Jr. retired, in 1993, it was after 25 years in banking. At the end of December 2021, he stepped down as executive director of the Henry Sheldon Museum of Vermont History in Middlebury. And so concluded a second career.

At 79, Brooks is still open to possibilities. "In my transitions, something always comes up," he said in a phone interview from his home in New Haven. He was referring in part to the other nonprofits he led or worked with prior to his decade at the Sheldon Museum. Those include what's now called the Frog Hollow Vermont Craft Gallery, then headquartered in Middlebury, and the Calvin Coolidge Presidential Foundation in Plymouth.

"In my transitions, something always comes up." Bill Brooks tweet this

Even during a pandemic, it can't hurt to keep your options open. But the Sheldon Museum might be a hard act to follow because it merges Brooks' primary passions: history and art. And if those don't seem like logical follow-ups to working in finance, well, they weren't, exactly.

We queried Brooks to learn more.

Let's start with where you're from.

I was born in Cambridge, Massachusetts. My father was from there; my mom is from Middlebury. They met when he was going to Harvard [University] and she was at Radcliffe [College]. But I grew up in Washington, D.C., where my dad was a lawyer and lobbyist. So, I had an early exposure to art at the museums.

Where did you go to college?

I went to Kenyon College in Ohio, a private men's college. I was in Air Force ROTC, so I served four years [after college]. Then I was a banker in D.C. and Maryland.

And then there was a big shift. What led you to art?

I had dated a woman whose mother collected folk art. We broke up, but my interest in art continued. [At first] I was particularly attracted to shore bird decoys.

So you went back to school...

I got a master's degree in American folk art studies — it was a two-year program through New York University and the American Folk Art Museum. My first internship was at the Shelburne Museum. When I graduated at age 50, I found there weren't too many jobs.

Yet you found some.

I worked for the Virginia Lynch Gallery in Rhode Island for a year. Then there was an opening at Frog Hollow. I knew Vermont because my family had a camp in North Ferrisburgh, where I'd spent time as a child. So I applied. I ran [Frog Hollow] four or five years. We had three galleries by the time I left.

Then I went to the Coolidge Foundation as the development director. I was there eight years and raised a couple million dollars. And then, in 2012, there was an opening at the Sheldon Museum.

So, back to Middlebury.

What qualities do you have that helped you lead a nonprofit museum?

[After] I went to New York in 1993, I went to annual folk art festivals there. I was introduced to GRACE [Hardwick-based Grass Roots Art and Community Effort] and served on the board for about 10 years.

From my experience at Frog Hollow, I had the marketing element — promoting Vermont artists and makers. And I'd had success at the Coolidge, raising money and cultivating donors.

I hope I brought these skills to the Sheldon Museum.

In a recent Addison County Independent article, reporter John Flowers noted that you've "always sought to make history come alive." What are some examples of temporary exhibitions at the Sheldon that illustrate this?

The bicycle exhibit ["Pedaling Through History: 150 Years of the Bicycle," 2016]. When I lived in Maryland, I came to Vermont for 10 years in a row to bike with Vermont Bicycle Tours. So, I had a personal connection with that one. And Glenn Eames [of Old Spokes Home in Burlington] has such a wonderful collection.

Wendy Copp's costumes and our clothing collection ["Fashion & Fantasy at the Edge of the Forest," 2013]. I invited Wendy to go through our collections and incorporate items with her extraordinary nature-inspired costumes.

There are all these wonderful children's book authors here. We had an exhibit celebrating the power of books and Vermont artists ["Draw Me a Story — Tell Me a Tale: Vermont Children's Book Illustrators & Authors," 2017].

You initiated a number of exhibitions yourself, right?

Yes, but the Sheldon Museum is a team effort. I couldn't operate without the team and 80 to 100 volunteers. And I can't say enough about Mary Manley, who's been associate director for 23 years.

The Sheldon is a community-based museum — the oldest in the country, in fact, according to the website. What's the difference between that and a town historical society?

A historical society is largely run by volunteers and focuses solely on the town. The Sheldon has thousands of works on paper, such as silhouettes of Charity [Bryan] and Sylvia [Drake], a 19th-century same-sex couple who lived in Weybridge. Those were featured in the Smithsonian’s National Portrait Gallery.

At the museum, we have greater resources. We have thousands of artifacts, including an archival documentary collection in the research portion of the building.

What else is in those archives?

We also have a lot of original art — watercolors and other works on paper. There's a great deal of material that has never been seen by the public.

Sometimes the direction of the museum has changed according to the director. I came along and had a greater interest in art.

The pandemic obviously has been very hard on museums. What particular challenges has the Sheldon had, and what has gotten it through?

We've benefited lately by the market because of our investment portfolio. We got several [federal Paycheck Protection Program] loans. We didn't have to lay off people. The Vermont Humanities and Vermont Arts Council have been very supportive. And the public has responded.

We had a number of outside events in the summer — for example, a celebration of [founder] Henry Sheldon's 200th birthday.

But I was the only one working [in the museum] for a year and a half, and there was an unfortunate insect manifestation in a textile storage area that had to be dealt with. We've also had to raise funds to replace our elevator and more than two dozen historic windows.

The museum closed in March 2020 and reopened in July 2021. Now it's closed again, and I don't know when it can reopen. It's a crapshoot.

We've tried to respond online, too. We upgraded the website and [hosted] Zoom presentations. The pandemic has offered a great opportunity for exposure. But it's hard to raise money — there are so many things offered online for free now. The challenge, always, is meeting the budget.

A quarter to half a million dollars.

Yes. I recently bought a sculpture at Studio Place Arts [in Barre].

Besides acquiring more art, what are you looking forward to in this retirement?

The original print version of this article was headlined "Making History"