Outdoor Artworks in the South End Signal the Hop Is Nigh 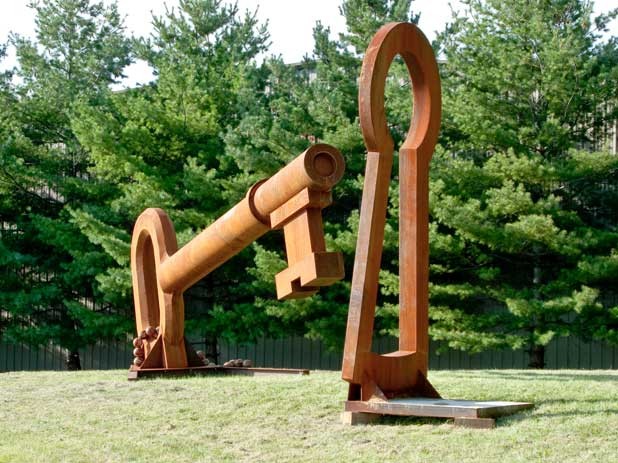 Want to get a jump on Burlington’s South End Art Hop? Then skip along Pine Street and Flynn Avenue to view the outdoor sculptures that have been sited in advance of the September 11 to 12 extravaganza.

The 20 public pieces included in this year’s Hop vary widely in scale, shape, material and level of aesthetic achievement. The uneven quality of the works reflects what Art Hop Chairman Mark Waskow describes as a “very egalitarian” selection process. It’s simple: Anyone who pays the $45 registration fee will have his or her work displayed.

“We don’t reject things for any reason, aesthetic or political,” Waskow says. “That’s what makes the Art Hop so wonderful.”

A few pieces, such as John Clarke’s “Egg” and “Dancers,” are quite elegant. This slender pair of 5-foot-tall carved wooden figures curves and twists rhythmically in the VCAM office at 208 Flynn Avenue. Male and female partners are readily recognizable in “Dancers,” while “Egg” abstracts their forms into a softly geometric composition.

In James Irving’s “Divided,” an 8-foot-tall metal arc resembling a giant stand pipe is dramatically bisected by a polished shard of granite that is itself split into halves. Because of its industrial look, this sleek sculpture appears right at home outside the Public Works Department on Pine Street.

A couple of pieces might easily be overlooked, due to their size, location or both. “Leary’s Last Lines” will bring a smile to Hoppers who recall the high priest of LSD — assuming they know to look above and to the left of the entrance to the South End Arts and Business Association at 180 Flynn Avenue. That’s where the roughly 120-square-inch plaque by James Teuscher hangs.

At the other end of the visibility spectrum looms David Tanych’s 1-ton, two-part steel behemoth that will gobsmack drivers or bikers as they approach SEABA’s office. It consists of a stylized mega-key, which also resembles a cannon, standing on a grassy knoll about 20 feet from an equally oversized lock. “Unlocked” is as amusing as it is monumental.

Tanych hauled the piece on a flatbed trailer from his home in Kirby to its temporary site on SEABA’s grounds, where it was hoisted into place by a crane. The artist says it took him about 120 hours and $2000 to cut, bend and weld steel beams into the desired shapes. “I’d love to sell it,” Tanych says of the work.

He’s also represented at the Art Hop by “My Penny,” a rust-colored disc the size of a cable spool. It looks much better on Tanych’s website, where it’s photographed in a snowy field, than it does in the shadowy spot it now occupies outside the Burlington Electic Department on Pine Street.

“Irie” by Randy Abar perhaps best expresses the festive spirit of the Art Hop. This frontal silhouette of a 5-foot-tall carnival dancer is posed on one black metal foot in front of Sondik Supply at 716 Pine Street. The crazy-haired figure wears red, yellow and green striped pants and holds wind chimes in its left hand. But what’s that in its right hand? A menorah with a suspended flap of green felt? Viewers can decide for themselves.

Want to hop to it?

The South End Art Hop is Friday and Saturday, September 11 & 12. Retail venues around the South End are selling “Art Hop Hero” buttons for a minimum $5 donation to help support this year’s event. A guide to sites and events will also be available shortly before the Hop. For more details, see the Seven Days Calendar or www.seaba.com.