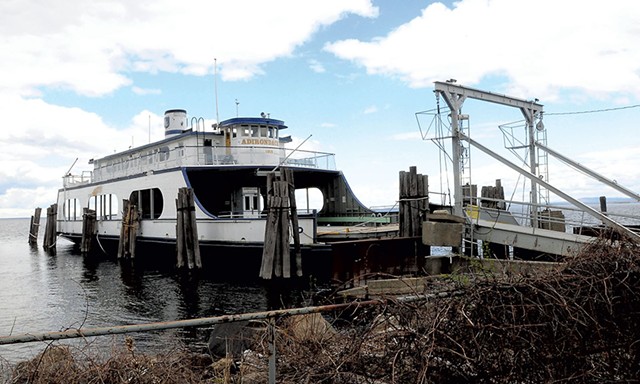 The Lake Champlain Transportation Company's plan to sink one of its retired car ferries in Burlington Bay foundered this week in the face of rising opposition.

Despite winning approval from state environmental regulators, the proposal to scuttle the 108-year-old Adirondack stirred up fears that the sunken vessel could further pollute the lake.

The company and state officials on Tuesday withdrew their joint application for a permit that the state Department of Environmental Conservation had already approved in March. Environmental groups had appealed, raising the prospect of a lengthy legal battle over something the company viewed as a philanthropic endeavor.

"We've concluded, in consultation with the transit company, that in light of the rising tide of public opposition, the cost of the project due to the appeal of the lake encroachment permit, and the pending review by the City of Burlington, that it is best not to move forward," Laura Trieschmann, the state's historic preservation officer, said.

The state Division of Historic Preservation was a co-applicant for the state permit because the sunken Adirondack would have become the property of the state. Proponents argued that the vessel would have become a draw as a dive site while preserving the historic ferry.

Instead, the Addy, as she is known, will be scrapped, Trieschmann said. John Paul, port engineer for Lake Champlain Transportation, declined to comment Tuesday.

The ferry operated for 65 years on the lake, mostly as a summer shuttle between Burlington and Port Kent, N.Y., where she now sits awaiting her fate.

In Montpelier, lawmakers who were powerless to retroactively block the permit nevertheless lambasted it. They are now considering a three-year moratorium on such sinkings.

The proposal had faced further review by the City of Burlington, whose Harbor Commission held a hearing on the plan earlier this month and had another one scheduled for June. The city was still determining whether it had jurisdiction over the sinking, which was to take place in 70 feet of water about a mile off Burlington's shoreline.

Trieschmann, however, said a city ordinance against abandoning vessels in the bay made it clear the project would have required a waiver from Burlington's harbormaster.

"As people learned more and more about it, the opposition was increasing," Trieschmann said. "As we've said from the start, if there is strong opposition to this, we will not go forward."

The Vermont Natural Resources Council and the Lake Champlain Committee appealed the DEC permit, citing concern about potential contaminants. The company had already begun removing engines, oil tanks and other potential contaminants from the ferry. Trace amounts of lead paint and PCBs were still expected to remain in the 150-foot-long vessel, however.

"It just never made any sense to us to use the lake to sink anything, let alone anything of this size." Jon Groveman tweet this

"It just never made any sense to us to use the lake to sink anything, let alone anything of this size," Groveman said Tuesday. "This never seemed to serve the greater public good."

The project's backers initially claimed it enjoyed wide support but in recent weeks seemed to realize the tide was turning.

"It's still a 50-50 proposition at best at this point," Paul acknowledged to skeptical lawmakers.

Jonathan Eddy, co-owner of Waterfront Diving Center in Burlington and the project's chief booster, said he was frustrated that the permit was appealed at the "11th hour" following what he considered a robust public outreach effort. He decried what he called misinformation about the project being spread in the press and on social media.

While people were right to worry about potential contamination, regulators concluded there was no significant risk to the environment, Eddy said.

"I get it. We're spending $2 billion, or whatever the figure is, to try to clean up the lake, and then some jamoke wants to go sink a greasy old boat in it," Eddy said. "But that's not what's happening."

The Adirondack was built in Jacksonville, Fla., in 1913. Lake Champlain Transportation purchased it from a Philadelphia company in 1954. A decline in demand on the Burlington-Port Kent crossing, combined with mounting maintenance needs, caused the company to retire the double-decker car ferry in 2019.

"The traffic in Burlington has dwindled over the last 10 or 15 years, and it's gotten to the point where it cannot support three boats anymore," Paul said during the sole public meeting on the project.

The company, which was founded in 1826 and purchased by the Pecor family in 1976, has two higher-volume, year-round ferry crossings at narrower points in the lake at South Hero and Charlotte. The company hasn't run the Port Kent crossing since retiring the Addy and doesn't know whether the route will ever resume, Paul previously told Seven Days.

In 2017 the company began exploring options for repurposing the aging vessel. The most expensive — at $1.3 million — was to pull it from the water for public display. Converting it into a floating restaurant was another possibility, but a slip would likely have cost $100,000 per year.

"You'd have to have a pretty good business model to make that work, and that doesn't seem to be there for the Addy," Paul told lawmakers.

The vessel doesn't quite have the "panache" of the 1906 paddle-wheel steamer Ticonderoga, on display at the Shelburne Museum just a few miles south, he noted.

Selling the ferry for use elsewhere would carry significant transportation costs, estimated at $158,000. The ferry would have to be cut in half to fit through the 60-mile Champlain Canal connecting the lake to the Hudson River, the company estimated. That really left only two options — selling it for scrap for $70,000 or doing the work needed to sink it for $170,000.

Some assumed, erroneously, that the company sought the scuttling to save money, Eddy said. "This is a true gift from LCT to the people of Vermont and the Champlain Valley," he said of the plan to create a dive destination.

Once cleaned, filled with cement, towed offshore and sunk south of Lone Rock Point, the ferry was to become part of the Lake Champlain Underwater Historic Preserves, a network of protected shipwrecks.

It would have joined 10 wrecks — nine in Vermont and one in New York — managed as dive sites by the Lake Champlain Maritime Museum. The Vermont Division of Historic Preservation, which maintains and markets historic sites including the Ethan Allen Homestead and the Bennington Battle Monument, had actively promoted the project. Trieschmann has said the state is exploring adding existing wrecks to the preserve system.

The DEC had concluded that public benefits outweighed any negatives, noting that virtually all contaminants would be removed from the vessel. Staff agreed the project would "take diving pressure off more fragile wrecks" and preserve "maritime cultural resources."

The permit would have required that the company follow the EPA's ship-scuttling guidelines, including removing oil and diesel fuel tanks, asbestos, and loose paint. Test results showed some lead in paint samples, as well as trace amounts of PCBs below the 50-parts-per-million limit in the 2006 federal guidelines.

The VNRC and the Lake Champlain Committee argued the DEC's analysis downplayed the contamination risks and overstated the benefits to a small group of people with the resources to dive.

"We understand they are meeting best practices in terms of removing toxins and other pollutants from the vessel, but we don't think they're going to get all of it," Groveman told lawmakers.

Lori Fisher, executive director of the Lake Champlain Committee, took issue not only with the proposal itself, but with the public process. The sole public meeting was one organized by the company on March 5, 2020, at the Burlington Police Department. Fisher noted that it took place on the cusp of the pandemic and most attendees were from the diving community. A video from the hearing shows the vast majority of the 60 or so attendees raising hands in support of the project.

"That is not a public outreach effort. That was an exclusive group," Fisher said.

A DEC environmental analyst, Misha Cetner, stressed during the session that since the 30-day comment period for the permit hadn't yet started, he would also be "scheduling a public information meeting on the draft permit itself" in Burlington in the future.

A few days later, Gov. Phil Scott declared a state of emergency due to the pandemic, and the project was paused. The DEC never held a public meeting.

Asked to explain why not, Commissioner Peter Walke referred to a document listing news coverage from 2018 and 2020, a Division of Historic Preservation web page about the proposal, and other public outreach. Fischer said her organization, which is dedicated to the lake's health, didn't ask for another public meeting because it didn't learn of the comment period in time.

Some lawmakers lamented that they didn't know about the proposed sinking until the permit had been issued. Rep. Jim McCullough (D-Williston) said he was frustrated that the legislature was "late to the dance" on the issue "all because of a very willing administration to take care of certain companies." Ray Pecor Jr., who used to run the company, and his son and current owner, Trey Pecor, have both donated to Scott's campaigns. Trey Pecor gave the aspiring governor $4,000 in 2016 and $2,000 for his 2018 reelection. He could not be reached for comment.

McCullough's commentary didn't sit well with Walke, who said he was taken aback by what "felt like slanderous comments" aimed at his staff, who had "faithfully applied the law and science to make those permitting decisions."

McCullough later said he was neither impugning staff nor accusing the administration of showing favoritism toward political donors. He meant only that the Scott administration was siding with business interests over "the public trust of waters," he said.

The exchange highlights how polarizing the debate had become over a project that seems to have hidden in plain sight for years. Lawmakers made plain their displeasure with the plan.

Rep. Seth Bongartz (D-Manchester), who has dived to three of the lake's historic wrecks, said making a contemporary vessel part of the historic preserve struck him as fake. "I feel like this is insulting to the notion of Lake Champlain wrecks as being part of a true historical museum in their own right," Bongartz said.

Susan Evans McClure, executive director of the Vergennes-based Maritime Museum, said scuttling vessels was common until the mid-20th century, when awareness of the environmental impacts led to regulations. Many of the 100 or more wrecks in the lake, including the preserved tugboat U.S. La Vallee, sunk in 1931, were scuttled, she said.

The Addy is clearly a historic vessel even if "being a continuously used double-ended car ferry isn't something that gets everyone excited," she said.

The Pecor Family Foundation is one of the museum's chief benefactors, having donated about $70,000 to its capital campaign over the last decade, according to its tax filings. Evans McClure said the museum does not discuss individual donors.

While disappointed in the project's demise, Trieschmann said she chose to focus on what could still be a positive outcome.

"We didn't get to sink the ferry for a new preserve," she said, "but we've got the potential to open up new sites that we hadn't thought about."

The original print version of this article was headlined "State, company drop plan to sink an old ferry in Burlington Harbor"