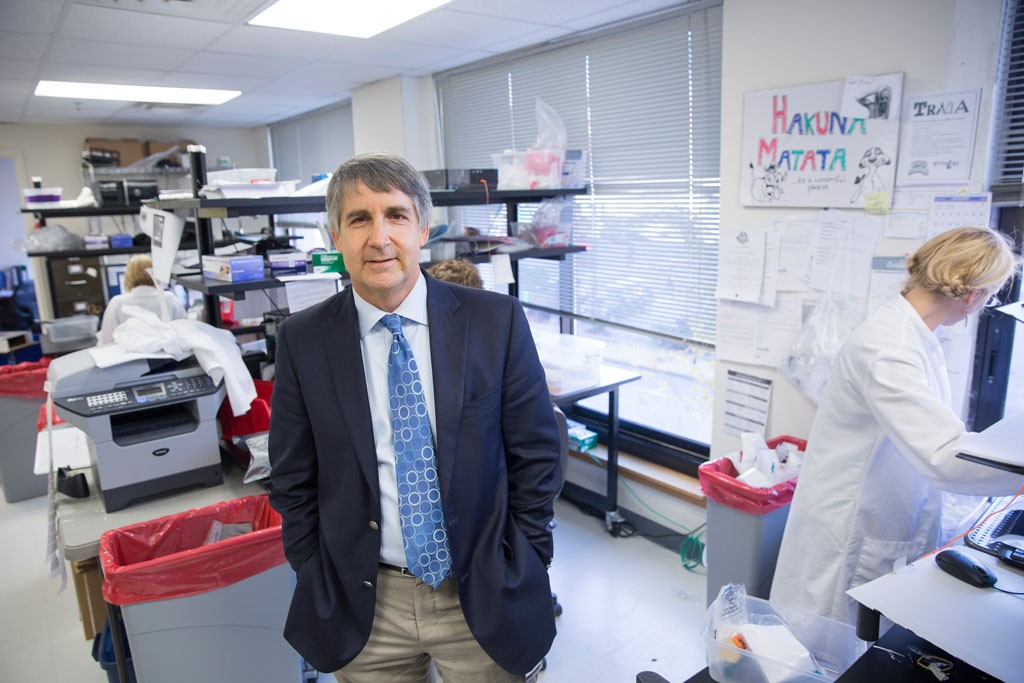 The UPS delivery was causing a bit of a stir in the cramped drug-testing laboratory in downtown Burlington. Workers in white coats clustered around the packages, removed sealed plastic bags from cardboard shipping boxes and sorted them into blue buckets.

Six hundred specimen cups — capped plastic shot glasses of urine — arrive most weekdays between 10 a.m. and 11 a.m. at Burlington Labs' second-floor testing facility in the Courthouse Plaza building. They are screened for a host of drugs such as cocaine, marijuana and heroin, and whoever ordered the tests — doctors, probation officers, homes for individuals in recovery — gets same-day preliminary results.

The work is clinical and can appear routine, even boring. But employee Alicia Sherman, an account executive, knows what is at stake. "Each cup of pee is someone's life," said Sherman. "This affects how their treatment is going to go."

Sherman is well acquainted with drug testing. For more than 15 years, she abused prescription pain medications, cocaine and heroin. She had to pee in cups many times — often while someone else observed. In fact, her urine used to be tested at this very lab.

Many employees at Burlington Labs are "in recovery" — including CEO Michael Casarico, who cofounded the company with his wife in 2006. Casarico said drug addiction problems led him to his calling: helping people get clean. He said his company's mission — providing friendly, walk-in specimen collection sites and fast, accurate results — increases the chance for successful treatment.

In a blue blazer and slacks with cropped hair and an easy smile, Casarico, 50, hardly looks like the party boy. But his substance abuse started when he was a young teen experimenting with alcohol. By his senior year in high school, he had tried cocaine. His drinking and drugging continued throughout his years at the University of Vermont, from which he graduated — "barely," he said — with a degree in political science in 1989.

Casarico maintained his hard-drinking and cocaine-snorting ways after college, and he said the behavior destroyed his first marriage. To appease his wife, he quit cocaine, but they wound up separating anyway, in August 1996. He quickly turned to drugs again, and this time it escalated to heroin — which he'd never tried before. He eventually sought help at Maple Leaf Farm (now called Maple Leaf Treatment Center), a rehabilitation center in Underhill. In November 1996, he checked himself in.

Maple Leaf not only worked for Casarico, he found himself drawn, post-rehab, to the substance-abuse field. He got a job at Act One, the detoxification program in Burlington, where he spent many nights sitting with heroin addicts. "I fell in love with helping people like that," he said. He later became a probation officer, working with "people who would not be in trouble with the law if it were not for their addictions."

The idea to start a drug-testing service came from that experience: One of Casarico's parolees tested positive for cocaine on an instant-read dipstick but swore he was clean. The man was sent back to jail until two weeks later, when a more accurate test exonerated him. 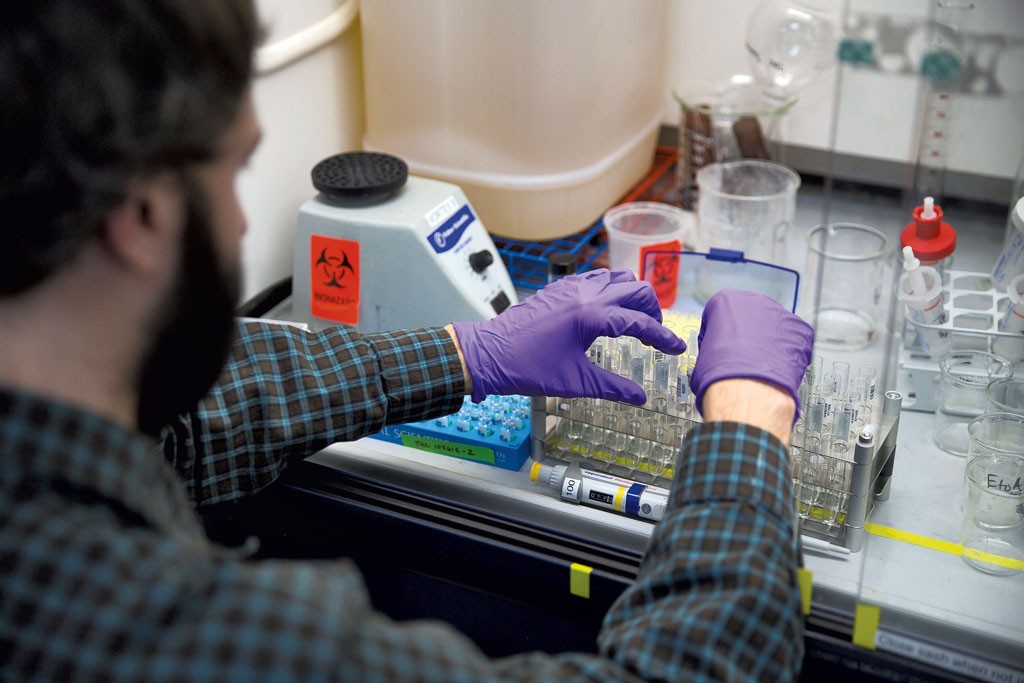 "I thought I could do it better than it was being done," Casarico said. "I didn't want anybody sitting in jail."

In 2006 Casarico and his second wife, Jodie, decided it was time to start Burlington Labs. He quit his job as a state drug-court coordinator, and they used savings to buy a desktop analyzer and rented a tiny third-floor office on Pearl Street. "I personally drove around to potential customers and told them about what Jodie and I were doing," Casarico said.

Business was slow at first. "Maple Leaf Farm was our first substantial client," Casarico said. The center began sending between 30 and 35 specimens a week, which was just enough for the fledgling lab to break even. Casarico said he and Jodie were so determined to keep Burlington Labs going, they would have taken outside jobs to pay the bills. "This was not a venture that was born out of wanting to make money," Casarico said, "though we thought we could make a living."

Two years later, in 2008, the company opened its first walk-in collection center in Burlington. By 2011, it had 11 employees but was still processing specimens in a single analyzer. Now there are three.

"In the four years since, our growth curve has exploded," Casarico said.

And its testing services have become more sophisticated. The $30 screening process, carried out on three analyzers that can hold multiple specimens each, is just the first step now.

In addition, most specimens undergo a confirmation process, which detects the presence or absence of specific drugs. Although it takes another two days and costs $50, the analysis can test for buprenorphine, for example, a drug used to wean people from opiates. Some addicts sell their buprenorphine to pay for heroin, and there is a market for it because the prescription medication eases heroin's withdrawal symptoms.

"Anyone ordering buprenorphine wants to make sure you are following through on your treatment," said logistics coordinator Kaitlyn Booth. Burlington Labs can tell from the test results exactly how much buprenorphine has been consumed or whether the client has scraped a bit of the pill into their urine instead of taking it. It's the most-requested test at the company.

The company brochure focuses less on science and more on its "compassion in action." The Casaricos committed to investing 10 percent of the company's pretax profits in causes that foster community health, which has generated nearly $500,000 since the lab launched.

"The more successful they are, the more they have been investing in recovery," said Gary De Carolis, executive director of the Turning Point Center of Chittenden County in Burlington. His organization, a 10-year-old nonprofit that offers a safe place for people in recovery to go during the day, has been one of 17 beneficiaries. Burlington Labs has made gifts totaling $30,000 to recovery centers in the state, including $10,000 to help open a center in Newport.

"It is just a wonderful organization," De Carolis continued. "I don't know what we would do without it."

The company's newest investment is a chauffeured van that provides rides for Addison County residents who can't otherwise get to AA meetings or therapy appointments. They don't have to be Burlington Labs clients to use the service.

Tae DeGray had been an employee for only a few months when she pitched the idea to company leadership. "It didn't take much persuading," she said. "They are all about giving back to the community." She added, "The van is busy every day."

Casarico said the company carefully selects employees such as DeGray. "The people we hire, we make sure they are very closely aligned with what we do," he said. The goal is a "welcoming and kindhearted culture."

The path that brought Dan D'Amato to Burlington Labs was anything but straight. The slim New Jersey native willingly recounted the double life he led beginning at age 13. "I wasn't comfortable in my own skin," he said. "The substances helped."

Academic and athletic achievement came easily to him, so he juggled three sports, booze and marijuana successfully until he was a sophomore in college and found opiates. Still, after dropping football, he managed to graduate from college in 2011 with honors, having majored in finance and international business. "I was hardly going to class," he said. "I don't know how it happened."

At 22, he went to work as a financial analyst at J.P. Morgan. Despite the long hours, he said, "it was everything I thought I wanted," but he couldn't ditch the drugs. "I was making a lot of money, but I spent every last dollar on drugs and alcohol. I was stealing, selling stuff that didn't belong to me."

A year and nine months into the job, D'Amato asked for a leave to try rehab. He ended up at Maple Leaf Treatment Center because he has relatives in Chittenden County. "I'm not even in Vermont three months, and I meet Mickey, our CFO," D'Amato said of Mickey Wiles, who embezzled $300,000 from Ben & Jerry's. Casarico hired him even though he had a felony conviction and is in recovery from substance abuse. Wiles suggested D'Amato apply for a $12.50-an-hour job as a billing clerk at Burlington Labs.

In April 2013, "I took the job," D'Amato said. "They were essentially giving me a second chance."

Now the company's financial analyst, "I have a life today," he said. "I am not slowly killing myself. I am able to be part of something much bigger than myself."

Casarico sees nothing but more growth in the company's future. "We will expand our presence in other states," he said, but promised the lab will remain in Vermont — most likely in larger quarters. From the lab's current 23,000 square feet, he said, "We are looking at 40,000 square feet with the ability to expand to 60,000."

Casarico expects the number and types of drugs his company tests to increase, too. "Our goal is to serve as many people as we can. We are here to empower individuals to improve their lives."

The original print version of this article was headlined "Positive or Negative? Pee Tests Are Profitable for Burlington Labs"