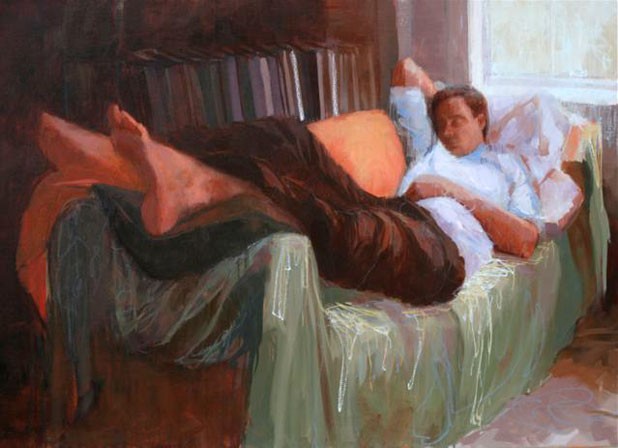 Cameron Schmitz’s two shows in Bristol will prove just the thing for those seeking respite from the hustle and glitz of the holiday season. Her paintings, photos and works on paper convey a profound sense of quietude, and they yield a full measure of their considerable pleasure only when viewed contemplatively.

In a statement accompanying her exhibit at the WalkOver Gallery & Concert Room, Schmitz says she draws inspiration from solitude. She also expresses it eloquently on canvases that never depict more than a single figure, if that. Her compositions are so representative of repose — many of her subjects are shown sleeping — that they qualify as still lifes even when a human is depicted.

Schmitz’s work is also as much about what’s not present as what is. She has an unusual ability to suggest absence in her art. That quality comes across most clearly in the many paintings, silk screens and monotypes that feature empty chairs. Viewers intuit that someone has just arisen and left, or that someone just outside the picture plane may soon arrive to fill that achy emptiness.

The notion of negative space is given a different spin in “Sleeping Figure V,” a particularly haunting work in a show filled with ghostly images. There’s actually no discernible figure in this painting, either asleep or awake — only an unoccupied couch covered with squiggles that resemble confetti. The tangled, draped strands grow more concentrated and whiter at the center of this dark divan, seemingly reflecting the light entering from a window behind it. A deathly aura is palpable here, even though there’s something reassuring about that wavy, yet unwavering, light.

Most of Schmitz’s subjects in this show are women. Some of them are pregnant, and each is seated or lying down, looking out a window or otherwise away from the viewer — that is, when her eyes aren’t completely closed. The female figures don’t appear to be meditating; instead, they seem to be remembering something.

Schmitz may, in fact, be painting memories. Her scenes look as though they’re receding, becoming more distant and less solid — a sensation accentuated by the misty aura she creates with a paintbrush or an etching needle. Several of her images are half concealed by thin streaks, which might be mistaken for rain if the settings weren’t indoors.

Drawing and etching may be the media most suited to Schmitz’s style. “North Side Studio,” a graphite-on-paper rendering of an empty chair alongside a small table and a large window, may be the strongest piece in a strong show. It’s here that the geometric aspect of her compositions emerges most strikingly. “North Side Studio,” like Giorgio Morandi’s paintings of bottles, is about as close as a straightforward representational work can get to abstraction.

“Far, Far Away,” the first painting encountered at WalkOver, gives a tantalizing hint that Schmitz may also be capable of colorful breakouts from her subdued palette. A child — sleeping, of course — is splayed on a fluffy white sheet with head propped against a brightly striped pillow. That’s the nearest a work comes to reveling in color for color’s sake. Let’s hope the artist moves at least a few degrees in this direction, because viewers will surely be yearning for relief from the shadows and somnolence by the time they’re finished viewing the selections at WalkOver.

The 15 photos displayed three miles away in a dining room at Mary’s Restaurant at the Inn at Baldwin Creek do have the painterly quality that Schmitz claims for them in an accompanying artist’s statement. They, too, are blurred in a way that allows geometric forms to predominate. Each was apparently taken from a moving car, sometimes with raindrops or road grit further clouding views of houses and fields, which are always devoid of human presence.

Of her commitment to solitude, Schmitz writes, “Perhaps it results from my personal concerns of a culture and generation consumed by interruptions and distractions.” Her refusal to be so consumed is just one of the ways Cameron Schmitz stands out boldly and promisingly in Vermont’s artistic landscape.