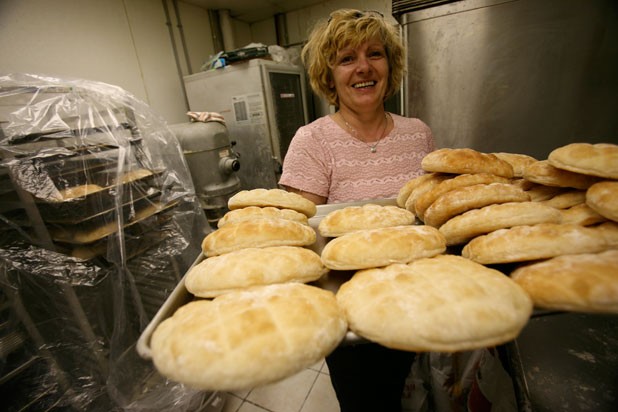 Immigrants bring their own distinctive flavors to Vermont — witness the recent boom in Thai and Vietnamese restaurants. But one new cuisine has snuck in under the radar, perhaps because it’s so similar to the hearty Old Country fare many of our ancestors ate — namely, Bosnian food. Local Bosnian-American entrepreneurs, themselves the products of a cultural melting pot, offer wares that may not sound particularly exotic: bread, cake, sandwiches, kebabs. But one taste confirms these foodstuffs are out of this world.

Or from a different one, anyway. War in the former Yugoslavia — now comprised of Slovenia, Macedonia, Croatia, Serbia and Montenegro and Bosnia — produced plenty of refugees. A significant population landed in Chittenden County; in 2004, a UVM publication reported that Bosnians accounted for 4.5 percent of the student body at Burlington High School. New York City has only two Bosnian restaurants, according to Zagat.com,. Meanwhile, tiny Chittenden County boasts three thriving Bosnian-run restaurants, all of which are expanding.

The newest, Euro Corner, on Burlington’s lower Main Street, is owned by Dalibor Vujanovic. The 33-year-old entrepreneur has been supplying the local Eastern European population since 2004, when he opened A Taste of Europe in Winooski. “When we opened as a retail store, most of the products were from Bosnia, but people started coming, saying, ‘Can you get this? Can you get that?’” Vujanovic recalls. “Right now we have products from Germany, Poland — from former Soviet Union, Russia, Greece.”

Demand for his imports led Vujanovic to create Eurofoodmart.com, which supplies Eastern Europeans as far away as Texas and California. Satisfying so many ex-pat appetites is a tall order. “I work with 15 different wholesalers,” Vujanovic says. “Sometimes I get stretched too thin — Greek people with the Greek product, Germans with the German product. Sometimes I work very late nights, then have to be here at 5 for the baking.”

Indeed, Vujanovic and his mother, Draginja, make all the bread for A Taste of Europe, the online shop, Euro Corner and other eateries in Vermont and New Hampshire. According to Vujanovic, “Africans say they like our bread; it’s kind of the same as [in] Africa.” (A Taste of Europe also does a steady business in phone cards emblazoned with zebras and cheetahs, specifically for calls to African countries.)

With a range of sizes and shapes, from boules to sticks, the Vujanovics’ breads are ethereally light, more air than bread, and sweet without resembling dessert. When used for a sandwich, the round lepinja soaks up every drop of moisture and flavor, creating something like an impromptu dumpling.

The mother-son team, with occasional assistance from brother Darko, also bakes a stunning variety of opulently named cakes that are exclusive to Euro Café. The Dinastija is a chewy walnut and raisin cake soaked in banana-flavored liqueur and topped with fresh whipped cream and chocolate shavings. It’s as rich as any French pastry. The Rafaelo is thick with coconut flakes and layered with a dose of vanilla custard.

Euro Cafe’s hot-food menu consists mostly of smoked-meat panini and homemade beef-and-noodle soup. “Probably in a week or two, we’ll be getting the grills in there,” the junior Vujanovic predicts. “In wintertime, we’ll be doing a lot of homemade cooking. Bosnian specialties like stuffed cabbage, stuffed peppers, goulash.” To ease American customers in, the grill will serve hamburgers along with Bosnian beef. Vujanovic also plans to purchase a rotisserie for gyros. “We will see as we go what people are looking for,” he says. “If people say make this or that, we’ll work on it.”

Euro Corner’s gyros will mean competition for Amir Jusufagic, owner of Amir’s Kebabs, who offers döner kebab — the Turkish term for the cone of seasoned ground beef and lamb, cooked rotisserie-style and finely sliced onto a blanket of bread and vegetables — on Burlington’s Church Street. Most Americans refer to it by the Greek name gyros. Jusufagic became aware of the kebab’s street-food dominance during his nine years living in Germany, where Turkish immigrants have made the sandwich a staple. “It’s like a hot dog for Europe,” Jusufagic explains, “but much better and healthier.”

After the Bosnian War, Jusufagic left Germany for America. “People who were already here told me it is a good place to live. I found everything that I loved in Bosnia, I loved here,” he enthuses. Driving for Domino’s, Jusufagic saw a void in the market for fresh and healthy fast food in Burlington. With the assistance of the city’s Community and Economic Development Office, he procured a plum spot for his new food cart, right across from Red Square. Each warm night for the past two and a half years, he’s served from 6 p.m. until 3 or 4 a.m. Kebab is “great food for late night — soft and warm,” says Jusufagic. “You could get a little slice of pizza for $5 or a big kebab for $6.”

Some of that soft warmth can be traced back to Dalibor Vujanovic, who bakes Amir’s bread. More notable, though, is Jusufagic’s sauce. “Most people know the sauce like a tzatziki,” the vendor says. “But mine is more Turkish, with yogurt, garlic and dill.” After several customers complained that they needed a fix after leaving the area, Jusufagic decided to bottle his creation, which will debut as Amir’s Garlic Yo-Ga Sauce next month at City Market. With the assistance of the Fairfax-based Vermont Food Venture Center, Jusufagic will have a space to turn Vermont milk into his own yogurt, to which he’ll add local garlic for sauces and salad dressings.

Like Jusufagic, Emnan “Barney” Crnalic left for Germany just before the war. The owner of Essex Junction’s Café Mediterano asserts, “Maybe one-third of the Bosnians here were in Germany first, maybe half.” The German influence explains the presence of kebab on Crnalic’s menu, though he says the meat cones have also gained popularity in his homeland.

While the gyros and falafel are among the more popular items on the menu, Café Mediterano offers many exclusively Bosnian options, most notably the cevapi. The juicy hand-formed beef sausages are grilled and served on a light, flaky — but wonderfully chewy — lepinja, along with onions and kajmak, a native soft cheese.

Crnalic makes the entire dish, from bread to kajmak. He also makes his own burek, individual meat pies baked in a buttery, chewy crust somewhere between phyllo dough and dumpling skin. “The pastries that we have here, burek and spinach pie — that’s real traditional Bosnian,” Crnalic says, going on to explain their permutations. “There’s one with cheese; the spinach pie; one that’s just layers of dough that you can eat with cottage cheese or sour cream or even meat.”

The introduction of baklava, and a walnut cake layered with chocolate ganache and vanilla cream, foreshadows the next step for Café Mediterano: a new bakery. “I’m going to be making my own breads, cakes, cookies,” says Crnalic. Most important, he adds, will be “lots of different rolls. A lot of bread in Bosnian cooking. It’s good and you have to eat a lot. Bread is main part of almost every meal.”

Crnalic’s customers convinced him to add a small grocery to his restaurant. Now, he says, “A lot of Bosnians have been asking for bread. You have to do what you need to do for your customers. You can’t just stay still and wait for something. It’s all up to you.” That entrepreneurial attitude is what transformed Crnalic from a pizza deliveryman — like Amir — into a successful business owner. “I’ve always liked cooking, even at home,” he says. “It’s relaxing for me. I started cooking professionally when I opened this.”

At dinner, the lights dim, and Café Mediterano takes on the look of a hip European café. When asked if his wife, Alena, was the one who chose the elegant leather seating and tall, metal tables, Crnalic smiles. “I decorated the place; it’s totally me. It was in my head long time. It’s like I was always preparing for it. For years I was researching the area, but I am not one who is rushing into something. The time came and all the circumstances were good. It’s a tough business. You have to really love it like me.”

Crnalic points out that his reasonably priced restaurant is more than a quick panini stop. He offers a $25.95 prix fixe dinner: a mixed grill for two with cevapi, gyros, seasoned grilled chicken and thick, moist Bosnian sausage, plus wine or beer.

Will Vermont embrace Eastern European soul food? With their high-fat, high-carb menus, Bosnian restaurants may not have the sleek, urban appeal of Asian ones. But in a long Vermont winter, it’s hard to imagine more comforting fare than a flavorful meat pie or hearty stew. For now, consider these Balkan treats our little secret.

A Taste of Europe