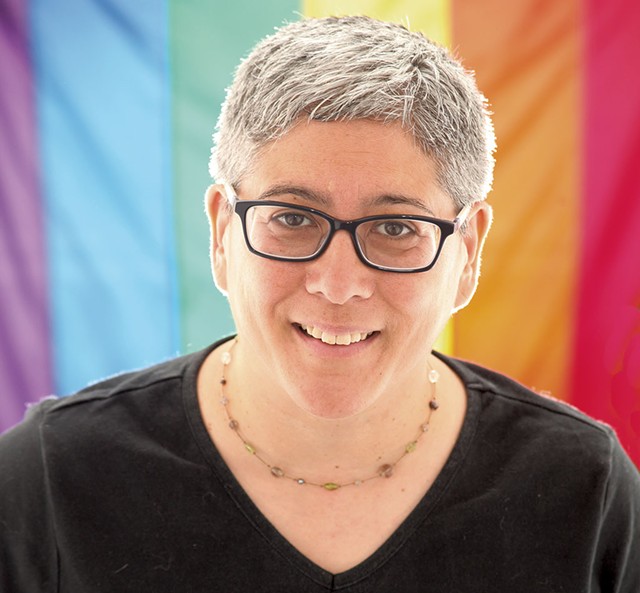 On June 13, a middle-aged woman wearing a tie tucked under a blue sweater stood on the steps of Burlington's city hall addressing a large crowd. She was less recognizable than some of the other people onstage — including Sen. Bernie Sanders (I-Vt.) and Mayor Miro Weinberger. But she was possibly the most qualified to help people understand the event bringing them together: a mass shooting the day before that left 49 dead in a gay nightclub in Orlando, Fla.

Kim Fountain, executive director of the Pride Center of Vermont, explained what straight people might not immediately grasp: "Bars have been central to the LGBTQ culture ... It is a place that we go for refuge from a really hostile world, and even that safety was taken from most of us when the shooting happened." Later, she tied the "hate rhetoric that we keep hearing from political leaders" to what she described as a spike in "violence against our communities."

Vermont's LGBTQ community was still mourning the murder of a 38-year-old transgender man from Milton when the Orlando massacre occurred. In the wake of the two tragedies, Fountain has been a steady-handed and industrious leader, supporting and speaking on behalf of LGBTQ people. With help from staff and others, she has organized the Orlando vigil, planned a memorial service, given numerous media interviews, and consoled and counseled members of her community.

While recent events have thrust Fountain front and center, she's been a familiar face in the gay community since 2011, when she became executive director of the Pride Center. A 20-year veteran of the LGBTQ movement, Fountain is credited with transforming the floundering community center into a disciplined organization that today is the largest entity serving LGBTQ people in the state.

"She's been the steady one through this," said board member Josie Leavitt. "She does not crave the spotlight, but when there needs to be one voice, she's happy to be that voice."

Sitting in her cramped, paper-laden office two days after the vigil, Fountain confirmed that she's glad to have the opportunity to act as a "translator" for the broader public. Even before tragedy struck, she said, "Most of what I've been trying to do here in Vermont is to try to shift the perspective that everything is fine for the LGBTQ communities."

Fountain, who keeps her silver-and-black hair cropped short, wears thick-framed, rectangular glasses, and, in Leavitt's words, "rocks a tie," explained all of this over the loud snores of an employee's pug that had taken up residence in her office.

The 48-year-old comes across as firm and driven but also down-to-earth and funny, equally capable of discussing liberation politics and joking about chocolate croissants.

When asked about her identity, she said she usually describes herself as a lesbian "because it's just easier for people to hear than 'dyke.'" The difference between the two terms, she said jokingly, is $40,000 a year.

Fountain, who grew up in Massachusetts, said her parents faced opposition when they married — her Yankee father and Japanese mother were a nontraditional couple. That, she theorized, made coming out to her parents in 1986 easier than it might have been. "They were like, 'If you're happy, so be it.'"

After graduating from UMass Amherst, Fountain rode her motorcycle to Santa Cruz, Calif., where she spent several years living in a tight-knit lesbian community and hanging out on the beach. In 1995, she moved to Park Slope in Brooklyn, N.Y., to study anthropology at the New School. She took a job working the front desk and managing volunteers at what's now called the New York City Lesbian, Gay, Bisexual & Transgender Community Center.

From there, while completing her PhD, she went to work at the Anti-Violence Project, founded in 1980 to address violence against gay people in New York. She eventually rose to deputy director, but after 10 years of dealing with LGBTQ victims of murder and other crimes, "I thought I was going to get out of the movement," Fountain recalled.

She had a change of heart when she saw the job opening in Vermont. The slower pace of life and the chance to lead a small organization appealed to her, Fountain said.

"Some say you have to be nice or effective. Kim is both."Jason Lorber tweet this

"When she came here, it was really week-to-week," said board cochair Paul Sisson, an accountant who previously served as Burlington's chief administrative officer.

After she got the job, Fountain moved to Milton with her partner, Ana Hernández. Living there, she's earned an appreciation for the particular challenges of being LGBTQ in a small-town setting, where being inconspicuous often isn't an option. "We'll be outside with my Japanese mother and [Ana's] Venezuelan parents, who are actually Trinidadian ... and I'm like, 'Let's go inside.' But that's about me. That's not about my Milton neighbors at all. I'm just feeling different out in the driveway."

The only time other people have made her feel uncomfortable has been at the polls, Fountain said. "When it's time to vote and the much more conservative politicians are out there shaking everybody's hands, I walk up and they're sort of looking up at the sky ... There's no handshaking and reaching out to me."

That hasn't stopped her from reaching out to them when advocating for LGBTQ issues.

After nearly five years on the job, Fountain described some of the changes she's made at the Pride Center.

She encouraged what had been a mere advisory board to become more active, and recruited new members, including Sisson and Leavitt, who have financial expertise and fundraising prowess. Within six months, she ended the practice of using a line of credit to make payroll. After improving the accounting practices, she commissioned the center's first-ever audit, which came back clean.

She successfully advocated for moving the center to its current, more centrally located spot on South Champlain Street in Burlington and adopting a more intelligible name: Pride Center of Vermont.

Fountain also put her foot down regarding activities that strayed from the center's mission. "We're not going to adopt puppies. You know what I mean? We're not gonna do ... whatever it is people do that they want to just tag 'gay' onto," she said.

Today the center operates seven programs — some focus on specific groups such as the elderly and people with disabilities; others are broader, addressing health and wellness and LGBTQ-related violence.

The budget is currently $350,000, but Fountain is proposing a $530,000 budget for the upcoming fiscal year, in anticipation of bringing in more grant money. "If there's a pot of money, I'm going to go after it," is how she describes her energetic approach to development, which also involves organizing fundraisers and soliciting private donations.

The staff hasn't grown, but current employees are getting paid better, Fountain said.

"She does a lot with little," Sisson said. "We run on a purse-string budget."

Fountain is more than just a shrewd manager. "Kim is an amazing, tireless leader," said former state rep and longtime advocate Jason Lorber. "Some say you have to be nice or effective. Kim is both."

Mike Bensel, who helped found RU12? and is now the Pride Center's health and wellness coordinator, described his boss as "tough" yet "extremely loving."

Christine Hallquist, the transgender CEO of the Vermont Electric Cooperative, sought out Fountain last year when she was planning to transition. "I was pretty nervous," Hallquist said, but "as soon as I met her, I said, 'Wow, I'm in good hands.'"

"She treats everybody with an equal amount of respect, no matter who they are," Hallquist said. At the Pride Center, "I'll be talking to a doctor on one side and a homeless person on the other."

That's likely because Fountain has made it a priority to reach out to the most vulnerable members of the community. The center has started working with Migrant Justice to support LGBTQ undocumented farmworkers. It's also begun focusing on older LGBTQ people. Fountain hopes a new group called Momentum, which serves people 45 and older, will be an "incubator," providing resources for groups serving older LGBT people around the state.

"She's acutely aware that there are a lot of older gays in Vermont ... who feel isolated and need to find ways to connect," said Edward Stehle, who acknowledges that he falls into that category and is helping to organize Momentum.

Among those drawn to the Pride Center was a transgender man named Amos Beede. On May 22, he was found severely beaten — facial fractures, brain injury, broken ribs — in a homeless camp near Burlington's Pine Street Barge Canal. He died from his injuries several days later. Police initially suggested it may have been a hate crime but later concluded it stemmed from a feud between camps. Beede lived in Milton but was visiting two homeless gay friends at the time of his death.

When reporters came to Fountain for comment, she told them that, whether or not Beede's murder met the legal standard for a hate crime, "the [LGBTQ] community views this as hate violence." During a Vermont Public Radio interview, she said, "trans individuals suffer much, much more violence and discrimination than other parts of the LGBT community."

In addition to shaping the public narrative around Beede's murder and serving as a conduit for information between police and the LGBTQ community, the center acted as an extended family to his relatives.

Fountain recalled intervening when she saw Beede's sister and mother start to read a newspaper article that described the beating in graphic detail. "I saw their body language, and I was like, 'OK, let's go sit down and work through this,'" Fountain said.

Together, staff and family planned a memorial service at Perkins Pier.

The community was still grieving for Beede when, on June 12, a gunman opened fire in a gay Orlando nightclub celebrating Latin Night. In less than 24 hours, Fountain and fellow advocates had organized a vigil. After conferring with Burlington Police Chief Brandon del Pozo and other city officials, she had made arrangements for a procession down Church Street that would end with speeches at Burlington City Hall Park.

More than 1,500 people came out, including presidential candidate Sanders. His presence didn't fluster Fountain, who was "cool as a cucumber," according to both Leavitt and Sisson — and that's precisely how she appeared as she addressed the large crowd.

Sanders spoke after Fountain, and when the senator was done, she gave him a hug. But the star power didn't prevent her from noticing a woman with tangled brown hair who had climbed the city hall steps to greet her. She turned away from the dignitaries to talk to Amos Beede's wife.