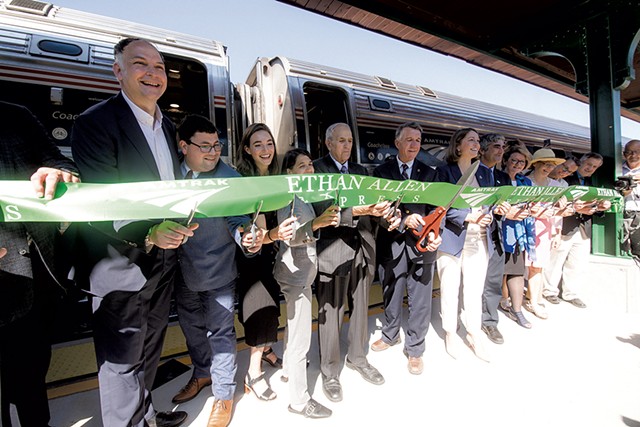 I arrived at Burlington's Union Station last Friday to catch a 10:10 a.m. train — and found a giant early morning party. I was about to climb on the inaugural Ethan Allen Express train from Burlington to New York City. It would be the first time a train carried people between the two cities since 1953, when a Rutland Railroad workers' strike ended the line's passenger service.

Scores of people — some in suits and ties, others in tank tops and shorts — milled around the 106-year-old station's ground floor, sipping coffee, noshing on cinnamon rolls from Great Harvest Bread and spilling onto the train platform. A man in a tie-dye T-shirt hippie-danced to a live funk duo while blazer-clad politicians exchanged handshakes and pleasantries. 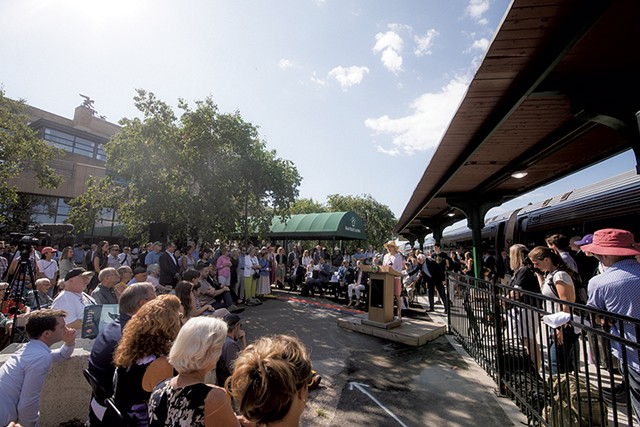 Before the speeches began, I encountered Dan Delabruere, Vermont's rail and aviation bureau director, and learned some less-than-celebratory news. He asked if I knew about the unexpected situation that had arisen. I'd received a cryptic automated phone call from Amtrak at 6 a.m. stating that the train would be delayed, I told him, but I was otherwise in the dark.

There was a problem in Albany, N.Y., Delabruere said. That city had informed Amtrak the night before that a large warehouse next to the tracks was in danger of collapse. Instead of riding the train past the unstable building, we'd disembark at Saratoga Springs, get on a bus to the Albany-Rensselaer Amtrak station and hop on another train into New York City. I braced myself for a trip that might take longer than the scheduled seven hours and 35 minutes. 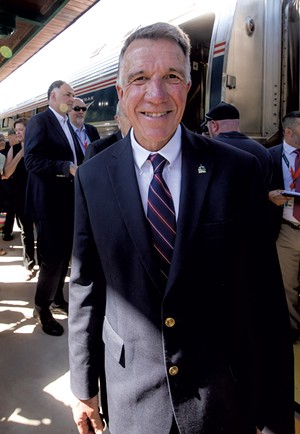 None of the speakers mentioned that snafu, though. As the sun beat down, Gov. Phil Scott, Sen. Bernie Sanders (I-Vt.) and Burlington Mayor Miro Weinberger took turns at the podium. People clapped and cheered as they extolled the convenience and environmental benefits of rail travel and the decades of collaboration that went into making the Burlington-NYC train route a reality.

"This has been a long time coming," Scott said. Improvement projects over the years — funded by $115 million in state and federal dollars — included new train platforms in Burlington and Middlebury, a new station in Ferrisburgh, 26 crossings, nine bridge upgrades, and many track improvements.

As the departure time approached, politicians and other local notables riding the train to the Ferrisburgh/Vergennes, Middlebury or Rutland stations checked in with a conductor before boarding one of four passenger cars. Unlike the dignitaries, though, I'd purchased my $150 round-trip coach ticket online, so I was directed to the front of the train to have it scanned. 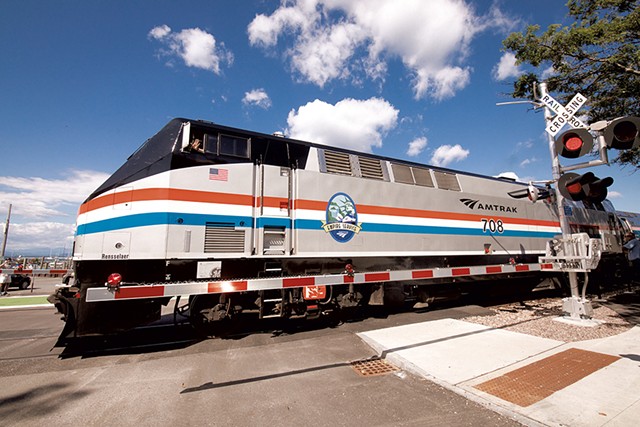 As we pulled out of the station at 10:16 a.m. and glided south, the smooth ride spoke to the upgrades on the 67 miles of track between Rutland and Burlington. The stretch had been improved to accommodate passenger trains, which travel faster than their freight counterparts; the Ethan Allen Express reaches speeds of 59 miles per hour. State legislators and candidates mingled with riders, and Amtrak's head honcho, Stephen Gardner, walked the aisle, engaging in small talk and posing for photos.

"I wouldn't have missed this for the world." Herb Russell tweet this

I settled into my spacious leather seat for the first leg of the trip. Retired Rutland state representative Herb Russell sat in front of me. Thirteen years ago, he'd founded Friends of Rutland Rail in a successful bid to save Amtrak's Rutland-New York City service, which began in 1996. Russell, a flight attendant who now lives in Rehoboth Beach, Del., had taken the train up to Vermont the day before.

"I wouldn't have missed this for the world," Russell told me, before disembarking at the Ferrisburgh/Vergennes station, just north of Route 22A. Smiling families waved, balloons bobbed and a local ice cream shop doled out scoops in front of the 170-year-old renovated and relocated depot.

Soon I was admiring the pastoral views as we chugged toward Middlebury, where two century-old rail bridges had been replaced by a 360-foot concrete train tunnel completed in the summer of 2020. The project had disrupted the city's downtown, but this was a day of celebration, and dozens of spectators waved and took photos from the platform. Democratic gubernatorial candidate Brenda Siegel rode the train from Burlington for a campaign stop dedicated to transit issues at a coffee shop across the street from the Amtrak station.

As the train continued toward Rutland, I struck up a conversation with septuagenarian Barbara Ray and her adult son, Howie, rail enthusiasts from Manhattan. Both nondrivers, they were on the tail end of a weeklong trip that had taken them by plane, bus and train to Québec City, Montréal and Burlington. They'd timed their trip to take this historic ride. An added draw? The possibility, now realized, of seeing Bernie in his natural habitat.

They recommended I check out the dining car and their favorite menu item, the chocolate chip cookie. tweet this

The pair had been traveling on Amtrak for fun since Howie was a boy. Mother and son had been cross-country by rail three times and had taken the Lake Shore Limited from New York to Chicago several times and the Coast Starlight from Los Angeles to Seattle once.

Rail travel is the best, they told me. The scenery, the comfort, the sound of the train whistle — all of it. They recommended I check out the dining car and their favorite menu item, the chocolate chip cookie.

"Ask if they'll warm it up for you," Howie advised.

I made my way back to the café, steadying myself as I navigated the slightly bumpy stretches between cars. Andrew Sorrentino of Staten Island manned the tiny kitchen, serving up Jimmy Dean English muffin sandwiches, DiGiorno personal pizzas, Angus cheeseburgers, and turkey-and-smoked-Gouda sandwiches. I opted for a bag of pretzels and a Diet Coke in lieu of the warm cookie and found a seat at one of the tables.

Across from me, I spotted a young man in a Municipal Railway T-shirt bantering with the crew.

Jonas Denenberg, I learned, is a 16-year-old train enthusiast from Chantilly, Va. He was traveling with a friend, 18-year-old Jonah Turner, whom he'd met at a railroad engineering camp in Michigan last summer. The day before, the pair had taken the Vermonter from New York City to Essex Junction — a nearly nine-hour trip — so they could catch the first direct train from Burlington to New York City. They planned to catch yet another train, from New York to Boston, at 2:40 a.m.

Denenberg, a high school student, told me he also runs a collectibles business, dealing mostly in Roman silver and U.S. coins. ("It's not illegal. It just sounds illegal," his friend Turner assured me.) He typically takes trains to coin shows in different parts of the country every weekend.

Rutland was the next stop. That's where Democratic state treasurer candidate Mike Pieciak was headed for a local chamber of commerce luncheon and to visit a nearby farm. I scurried off the train and into another party, this one featuring the Rutland City Band and staff from a local eatery piling pulled pork, mac and cheese, and coleslaw onto plates.

I jumped back on before the train pulled out. Before returning to my seat, I stopped to talk to Robin Law of Essex Junction, her son Jacob, 14, and her daughter Laura, 9. They had a full itinerary planned in New York City — Times Square; Central Park; the Intrepid Sea, Air & Space Museum; and the Staten Island Ferry — before their return trip to Vermont on Monday. Traveling by car, especially into a city, is a headache, Robin said. They were enjoying the leisurely pace of the ride and the freedom to walk up and down the aisle.

I finally sat down a little after 1 p.m., folded down a tray table, and logged into my computer to check email and put the promise of free Wi-Fi to the test. (It passed.)

As I looked out the window at the fields and houses whizzing by, I was lulled by the faint sound of the train whistle. The seat was cushy, and the legroom was ample. I likely could have dozed off for a few hours. But, alas, there was that pesky detour outside Albany.

We pulled into Saratoga Springs at about 2 p.m. and found three buses waiting. I loaded my suitcase into a luggage hatch, then boarded the bus for a 45-minute ride. The throbbing techno music coming from my seatmate's AirPods made me long for the personal space I'd enjoyed on the train.

As we approached Albany, a man seated in front of me pointed out the window at a hulking eyesore of a building with a crumbling brick façade and broken windows.

"It" was the structure that had forced us off the rails and onto a bus. I consulted my phone and found an article from the Times Union, an Albany newspaper. A structural engineering report released earlier in the week had found the privately owned Central Warehouse at risk of collapse; Albany's mayor had declared a state of emergency after chunks of its concrete fell near the tracks. The situation hadn't affected just our train route; Amtrak had also temporarily suspended service west of Albany on the Empire Service to Buffalo and Niagara Falls and on the Lake Shore Limited to Chicago.

The bus pulled into the Albany train station — actually located across the Hudson River in Rensselaer — and we boarded a new train, joining another group of passengers. From there, we followed the Hudson River south, with stops in Hudson, Rhinecliff, Croton-Harmon and Yonkers.

As we neared the end of the line, Howie, my friend from the morning leg of the trip, came to bid me goodbye — and to expound a bit more on the benefits of train travel. You can work comfortably on your laptop, grab a beer from the café and chat with interesting people, he told me.

I asked if the bus detour had made the day's trip any less enjoyable for him.

Before leaving, he told me to take in the grandeur of Penn Station's Moynihan Train Hall — New York City's former main post office, which a $1.6 billion renovation had recently turned into an extension of the train station.

Soon, we were rumbling through a tunnel, then pulling into midtown Manhattan. I looked down at my phone. It was 5:45 p.m. We were right on time.