Our Lady Peace's Raine Maida Opens Up About Relationships and Fatherhood 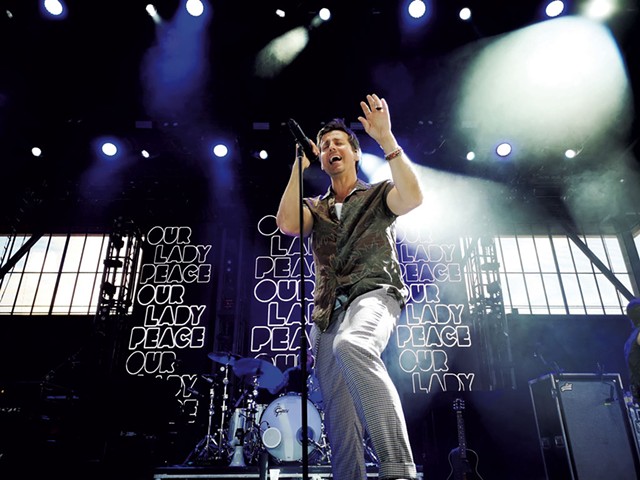 Canadian rockers Our Lady Peace were one of the quintessential bands of the 1990s alternative boom. The group shared qualities with many of its guitar-driven contemporaries, such as angsty power chords and propulsive beats. But front person Raine Maida's iconic jolts from chest voice to falsetto singing and enigmatic, labyrinthine lyrics helped set the group apart from the pack.

While many buzzworthy bands of the era dissolved over the years, Our Lady Peace have remained consistently active, racking up multiple platinum and diamond releases along the way. The group released its ninth studio album, Somethingness, in 2018. Meanwhile, Maida dropped two solo albums and a string of singles and EPs. Currently, he and his wife, Juno Award-winning singer-songwriter Chantal Kreviazuk, are working together as duo Moon Vs. Sun.

Years after cowriting the single "I Love It When You Make Me Beg," the Los Angeles-based couple recently retreated to a small French island in the dead of winter to work up more joint material — with a film crew in tow. The emotionally charged results, which examine both their artistry and relationship, are chronicled in the documentary feature I'm Going to Break Your Heart. Canadians can watch it on Crave, and American audiences should see it offered on a domestic streamer in the near future. An album and book are soon to follow.

Our Lady Peace perform as part of the Alt-Imate Tour on Friday, August 23, at the Champlain Valley Fair in Essex Junction. Bush and Live co-headline.

Seven Days caught up with Maida by phone.

SEVEN DAYS: I think the descriptor "alternative" has lost some of its meaning. But I wonder if it ever really meant anything to you to begin with.

RAINE MAIDA: I think it was a differentiator. It had relevance in the sense that it separated it from a lot of the '80s rock music, you know? If you listened to an alternative station, you weren't going to hear that stuff.

Growing up in Toronto, there was this radio station, CFNY the Edge. That's where I first heard Catherine Wheel, Radiohead, Blur — definitely a lot of UK bands. You wouldn't hear that stuff that was dominating MTV at the time. I think we've gone past that now. But I think, back then, music was still kind of fragmented. It's definitely not as much anymore.

SD: I was a teenager when "4am" from Clumsy came out, and it's long been one of my top teen-angst songs. Its lyrics are much more literal than those of some of your other hits in the mid- to late '90s. Is that because the inspiration came from a more literal place?

RM: It was always kind of my thing to not be as personal, for whatever reason. I liked the idea of being interpretive. With "4am," I wrote [it] literally at four in the morning. I think I slept a couple of hours and called the engineer and said, "Can you meet me in the studio by 10 a.m.?"

I worked up a demo of it before [the band] got there. I remember being very, very nervous to play it for everyone because it was so personal. But I did, and everyone was like, "We need to put this on the record." It was one of those things where I just went with it. I didn't analyze it too much. I didn't try to abstract it. I just kept it as it was. It's not something I do often, but it just felt right for that one song.

SD: What are some conscious things you do to distinguish your solo music from Our Lady Peace?

RM: There's really never been electric guitars [in my solo music or Moon Vs. Sun]. It's much more organic. It's definitely based more around the rhythm of the lyrics [and] the beat as opposed to a guitar riff. Ultimately, just by virtue of that fact, it's gonna go down a different path. With my wife, writing with her, having her influence — she's a really strong songwriter — right away, that takes it somewhere different. And I like that. I never wanted to have any side project feel like it steps on the feet of OLP.

SD: The trailer for I'm Going to Break Your Heart is pretty bleak. Did you know that you were going to get into all of that heavy, emotional stuff when you set out on that project?

RM: I think we knew it was going to be intense. First of all, we've never made an album together, so that was going to be a challenge as writers. Second, we were 4,000 miles away from our family, our kids, our dogs — just life in LA. I think there was a little bit of pressure that we didn't even think about. We made this huge commitment: We're spending all this money to go off to this place to write an album. Who the fuck knows if it's even gonna work out? Are we gonna write any good songs? Are we gonna make that leap and come back with nothing?

There's just a lot of pressure. That's why we went to see our marriage coach beforehand and afterwards to kind of recap. We decided to film it all. When we came back with this footage, [we said], "OK, the songs are written because of these conversations, arguments, dark places [and] amazing moments, as well." It's not all dark. It was a human experience. Because we're married, you can't separate the two. You couldn't just show us writing songs.

SD: What do your kids think of the doc?

RM: They live it, so when they see it on film, it's funny to them. What happens in the doc is what happens at home every day. I think they'll really appreciate it later on, when they get into relationships. At the end of the day, when you try to break down what the themes are, it's about communication and collaboration.

SD: How old are your kids?

SD: Are they music fans? What are your thoughts on how they discover and consume music? They must benefit from having two musician parents.

RM: Yes, but I think pretty quickly they started to develop their own tastes. To me, it's more about having an open mind and not getting stuck in anything. For them, it's amazing how it happens. They'll listen to some crappy hip-hop [like] Migos. I'll be like, "I get it, but this isn't gonna move you."

My 14-year-old is listening to '50s music right now. Literally two days ago, I was asking him how did he find this [and] what he loved about it. He said, "I love the simplicity of the arrangements. I love the musicianship. It feels real." It's wild to see how they jump around.