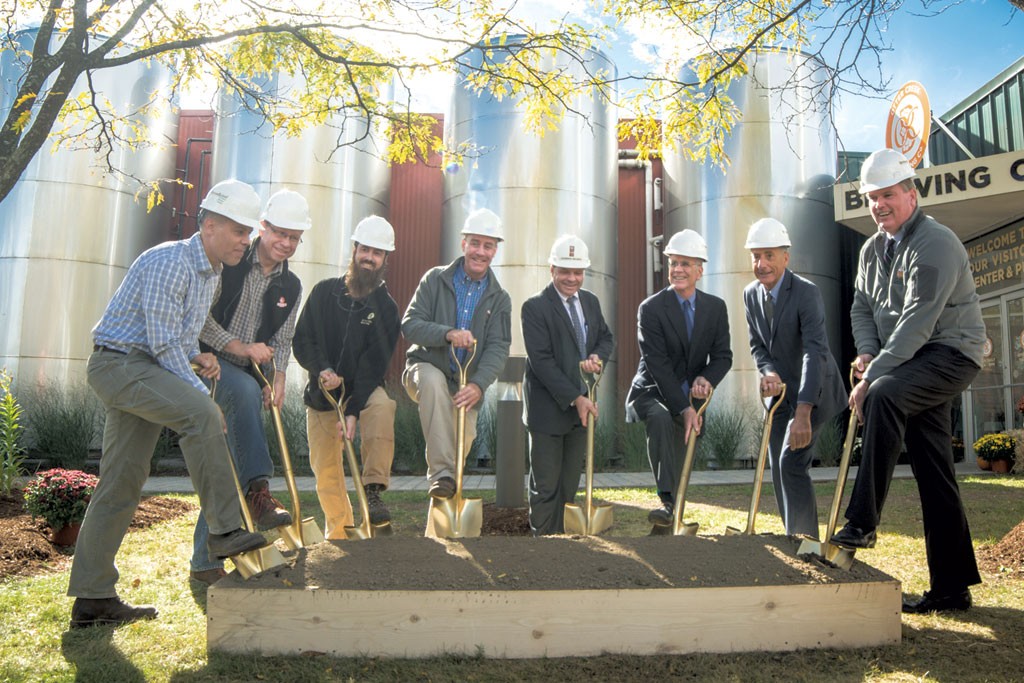 On Monday, October 5, Middlebury's Otter Creek Brewing broke ground on a massive new project adjacent to its current Exchange Street location. Rolling out in three phases, which won't wrap until at least 2018, the project will incorporate a German-built 120-barrel brewhouse, new fermenters, a new bottling line, cold storage, lab space, an expanded pub and office spaces. To accommodate renovations, the brewery's on-site pub will be closed all this November.

The larger brewhouse will increase Otter Creek's capacity to 200,000 barrels per year. Next summer, once beer starts flowing through the new system, Otter Creek — which also handles production for Wolaver's Fine Organic Ales and the Shed Brewery — will surpass South Burlington's Magic Hat Brewing as Vermont's largest brewery by volume.

The project is the latest in a stream of changes at the 25-year-old company. In recent years, Otter Creek swapped malty flagship beers such as Stovepipe Porter and Copper Ale for hop-forward brews such as Backseat Berner and Over Easy IPA. Last year, it further transformed its image with a colorful, fun-loving rebrand based on the style of its tie-dye-sporting brewmaster, Mike Gerhart.

They can scratch the itch this Sunday, October 11 — and it might be a good idea to bring along their dull kitchen knives. Cofiño will pop up with his hefty $15 stackers at Shelburne's Chef Contos Kitchen & Store during its knife-sharpening session from 12:30 to 2:30 p.m.

Can't make it this weekend? No se preocupe: Via email, Cofiño says he plans to return to the shop through the fall and winter during the chef's monthly sharpening sessions.

Pumpkins for a cause? Jo Ann Thibault of Barnyard Farm Stand in Colchester began selling pink pumpkins to benefit the University of Vermont Cancer Center three years ago. "I thought, Oh, my gosh, wouldn't this be a cool concept for breast cancer awareness?" Thibault recalls.

Last week, nearly 50 customers came to the farm looking for pink pumpkins. She had to turn them away. You can buy the pumpkins this weekend only, October 10 and 11, from 6 a.m. to 4 p.m. And come early, Thibault warns. She's sold out every year.