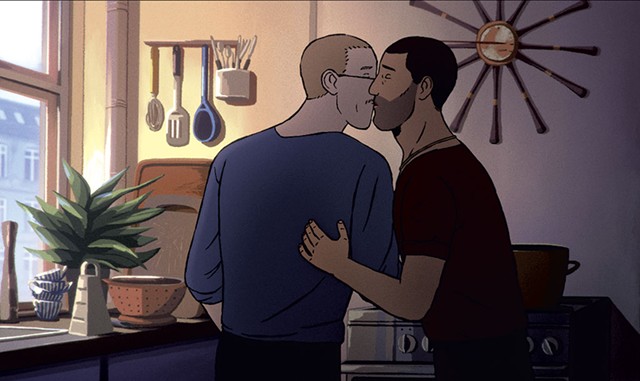 Yesterday it became official — the Danish film Flee has been nominated for the Oscars for Best Animated Feature, Best Documentary Feature and Best International Feature. The doc was a labor of love for director Jonas Poher Rasmussen, who met protagonist Amin Nawabi (a pseudonym) when both were teenagers.

Rasmussen first considered making a documentary about his friend's flight from his native Afghanistan 15 years ago. But Nawabi wasn't ready yet to open up about those memories. Later, Rasmussen got an inspiration: He would present the story as animation rather than live action, putting a layer of distance and anonymity between the film and real events. Nawabi liked the idea.

Flee is currently playing at Montpelier's Savoy Theater and rentable on various platforms.

The film opens with an animated re-creation of Rasmussen's first interview with Nawabi, who's now a successful academic. He and his longtime boyfriend are discussing marrying and moving to the countryside, conversations that rouse Nawabi's ambivalence about the whole concept of home.

As Nawabi narrates, the present-day scene gives way to flashbacks of his childhood in Kabul in the 1980s. Young Nawabi barely remembers his father, who never returned from the prison to which Afghanistan's Soviet-backed government sent him.

What happened next, as the Taliban took control of the country? When he sought asylum in Denmark, Nawabi told the immigration authorities that the Taliban killed the rest of his family, and he escaped on his own to Moscow. Now, however, he tells Rasmussen the true story, which is twistier but no less harrowing.

While animated documentaries may seem to some viewers like a recent fad, they've actually been around since the age of silent film. Animation gives documentarians the power to depict events they couldn't witness, without resorting to History Channel-style reenactments. And, because animation is so expressive, it can be used to highlight the unreliability of memory and the subjectivity of storytelling.

Working with the animators of Sun Creature Studio, Rasmussen depicts Nawabi's early childhood in fluid, dreamlike forms reminiscent of A-ha's 1985 "Take On Me" video. In a sly bit of allusion, Nawabi listens to that very song on his Walkman.

The images soon solidify, but they retain a painterly eloquence. The sun-drenched vistas of Kabul embody nostalgia. By contrast, the brutalist tower blocks of Moscow, where Nawabi and his family flee after the rise of the Taliban, offer a merciless northern palette. Here, stuck in a dangerous limbo as they seek passage to Sweden, the family finds sunlight only in Mexican telenovelas.

It doesn't take long to understand why teenage Nawabi lied about his past when he eventually arrived in Denmark, alone. Fabricated by the same traffickers who decided his destination, the lie was simpler and easier to digest than the truth.

In Flee, though, Nawabi's real migration story comes vividly alive. While outright atrocities do happen on the margins of his tale, it's mostly a story of false starts, institutional humiliations, simmering threats and Kafkaesque waiting.

Everything comes to a head in a stunning scene that takes place on a clandestine voyage to Scandinavia. As the migrants desperately bail out their unseaworthy vessel, a Norwegian cruise ship looms over them like a vision of salvation: "Everything we want to achieve is right there," Nawabi recalls.

But the cries for help go unanswered. The wealthy white passengers snap photos, while the captain calls the coast guard to send the migrants back where they came from.

Flee always filters such experiences through the prism of young Nawabi's individuality — his adolescent restlessness, his love of pop music and his struggle to come to terms with his sexuality, for which "there wasn't even a word" in Afghanistan, Nawabi says. As we watch global forces shape young Nawabi into someone smaller and warier, we realize that the adult Nawabi's fear of romantic commitment is actually a fear of trusting in permanence. After so many forced departures, travel feels safer to him than attempting to build a "home."

Because the animation is frequently so beautiful and Nawabi so personable, Flee isn't the bleak experience that a straightforward documentary on the subject might have been. Nawabi may suffer trauma, but he meets it with resilience, and his story will resonate with anyone who's ever struggled to come to terms with their past.

It's an easy story to universalize: All refugees seeking safety across a border have certain things in common. But they also have countless vital differences. By focusing on the story of this one secretly gay Jean-Claude Van Damme fan, Flee reminds us that migrations are always movements of individuals.

Waltz With Bashir (2008; Documentary Mania, rentable): In this Oscar-nominated animated doc, Israeli filmmaker Ari Folman tries to fill the gaps in his memories of fighting in the 1982 Lebanon War.

Tower (2016; Kanopy, AMC+, Doc Club, Sundance Now, CuriosityStream, rentable): For another example of the power of the animated doc form, try this chilling re-creation of the 1966 mass sniper shooting at the University of Texas, featuring vintage audio.

Persepolis (2007; rentable): Cartoonist Marjane Satrapi codirected this award-winning adaptation of her graphic novel about growing up in and eventually fleeing revolutionary Iran.