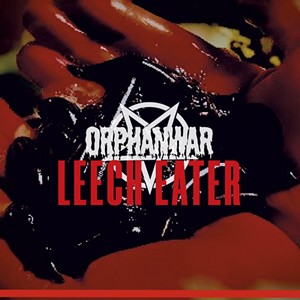 Being a metalhead in the '80s seemed so romantic. To be fair, I was a little kid. But the Satanic Panic was on, pentagrams were all over the backs of denim jackets, the Parents Music Resource Center folks were out there wagging their fingers, my mom let me have a mullet for a hot minute ... It was wild.

In contrast, I always thought metalheads in the '90s were so ... I don't know, morose? Pre-emo? Particularly the death-metal kids. There was such a woe-is-me vibe to all the people wearing Cannibal Corpse and Entombed shirts. We'd all get our shitty high school weed from the same people and, whenever the crossover would happen, I just couldn't get over how seriously they seemed to take everything.

I think I was missing something important in the music, though, something OrphanWar's new LP Leech Eater has brought to light. The doomiest of doom metal, OrphanWar is a bit of a vanity project for Waterbury's Bishop LaVey, aka Kane Sweeney. LaVey produces a healthy amount of material, most of which falls squarely into the fascinating genre of doom folk. As OrphanWar, however, LaVey clearly channels a deep love of death metal.

There's nothing inauthentic about Leech Eater. Crushing, bruising riffs abound, and LaVey has the perfect growl-to-scream ratio for a singer who's shouting about force-feeding someone fecal remains (from the song, um, "Force Fed Fecal Remains"). The album would benefit from a live, organic drummer, but LaVey has made improvements in his drum sampling since 2020's Knife to a Skin Fight.

It's the tongue-in-cheek feel of Leech Eater that got me, though. Sonically punishing and heavy songs such as "Self Inflicted Circumcision" are also pretty fucking funny. "Bursting at the Stretch Marks" actually made me guffaw, once I was able to figure out the lyrics.

There are some close parallels between OrphanWar and Dethklok, the fictional band that starred in the Adult Swim animated classic "Metalocalypse." The cartoon death-metal band was the brainchild of series creator (and killer guitar player) Brendon Small; its doom-laden opuses, such as "Briefcase Full of Guts" and "Mermaider," feature a kind of stoner humor that seems to have influenced OrphanWar.

Listening to "Cyborg Apocalypse II: The Reckoning" — the final and strongest track on Leech Eater — it becomes clear that LaVey finds merit in doom metal. Indeed, he's lovingly created an ode to the genre. But he also understands the potential to have a laugh while he's at it.

This is what I'd missed when I rolled my eyes at classmates in Type O Negative or Cattle Decapitation shirts. Yes, they were trying to be "metal as fuck," but they were also having a lot more fun than I ever gave them credit for. They were in on the joke, but also knew it wasn't a joke.

That is exactly the feel of Leech Eater, a quality that eventually charmed me. I've also started listening to fellow metal spoof artists such as Witch Taint and Cannabis Corpse, so I think I'm starting to get it, too.